The Victory Gardens at Boston Back Bay Fens were originally used to grow vegetables to help with the war effort. Small plots, similar to allotments in the UK, they are now more commonly used as little gardens where flowers and gazebos replace cabbages and bean cages. 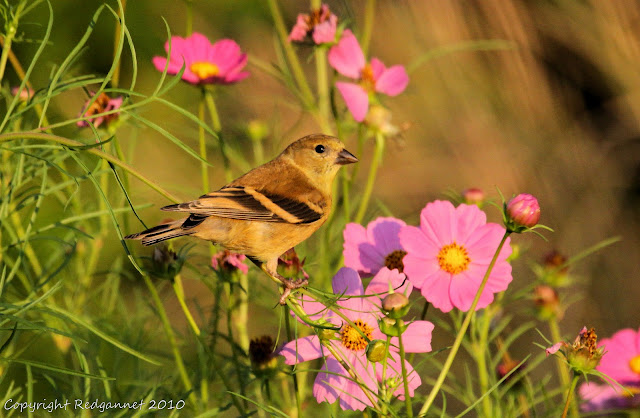 Seed flowers such as daisies and sunflowers are popular and these attract American Goldfinches. I could only see one bright yellow male today and he was beginning to lose his breeding finery in favour of his winter coat. 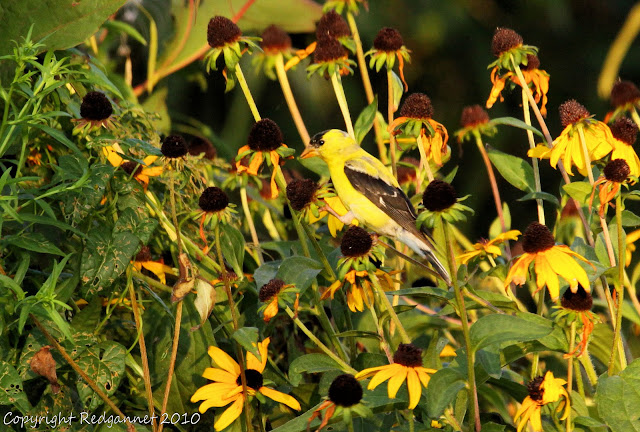 A Baltimore Oriole sat in a shaft of early sunlight and burned a vivid (albeit somewhat blurred) image on to my memory card. I think it is a trumpet vine that has the large orange flowers. (The PS by the copyright reservation indicates a bit of PhotoShop jiggery pokery) 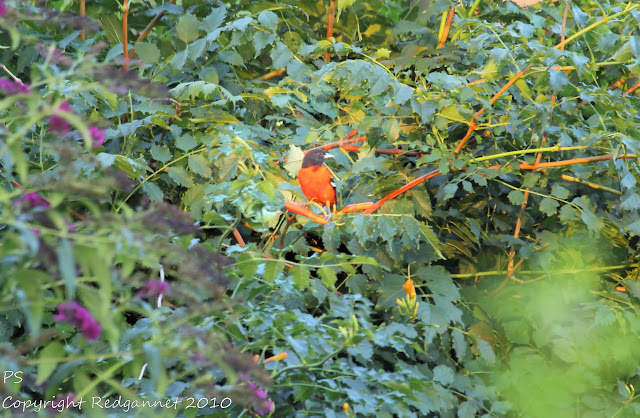 One garden in particular was full of birds. The seed-laden flower-heads were a big draw as was the little pond with some bathing bricks in it. Northern Mockingbirds were abundant here and perched up on the gate. 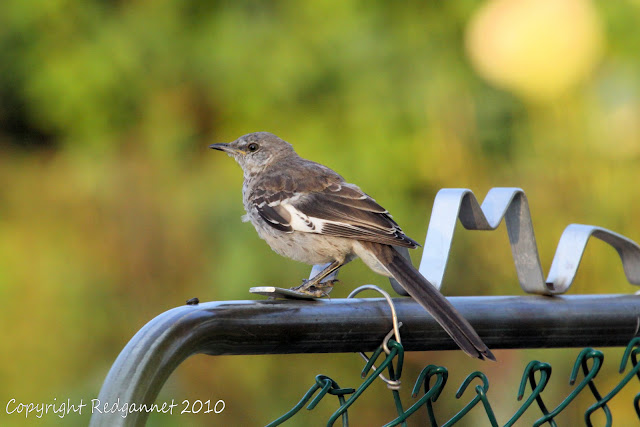 Grey Catbirds were very common too and liked to perch on the chair in the shade of a small bush. In the undergrowth a couple of Common Yellow-throats skulked quietly. 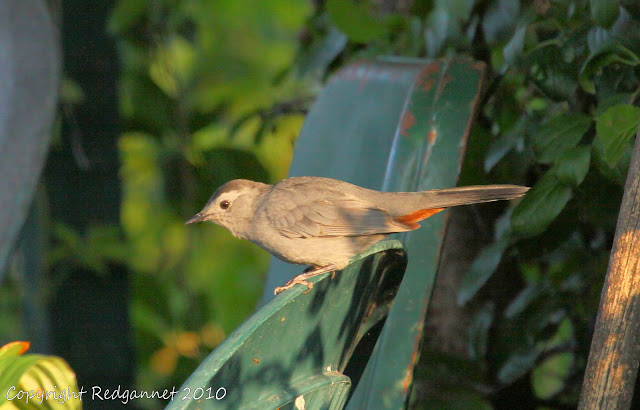 Muddy River is lined with tall rushes and flows sluggishly through Back Bay Fens. I made my way back and forth across the bridges but here was not much action beyond the allotments. Near the Korea Memorial, a few Blue Jays and American Robins chased each other through the trees. Beyond the Rose Garden, a flock of Canada Geese grazed on the open area. 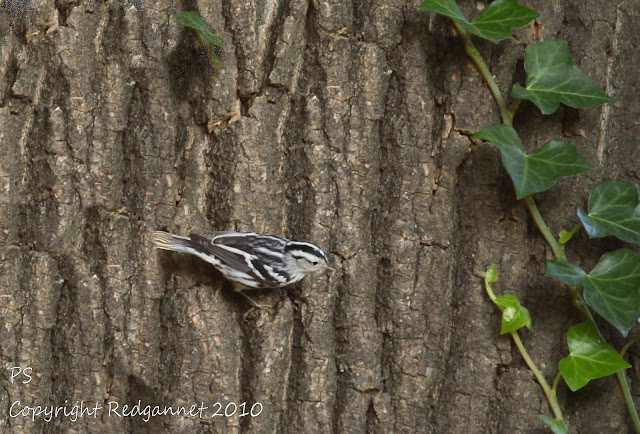 I was hoping to find some warblers passing through at the head of the migration. I returned to the Victory Gardens and was just in time to see a Black and White Warbler “nuthatching” on the big tree in the same birdy garden I had been watching before.
A mourning dove was showing off by raising a wing as if trying to impress his companion. Mostly he was trying to attract her attention with the right wing, occasionally both. 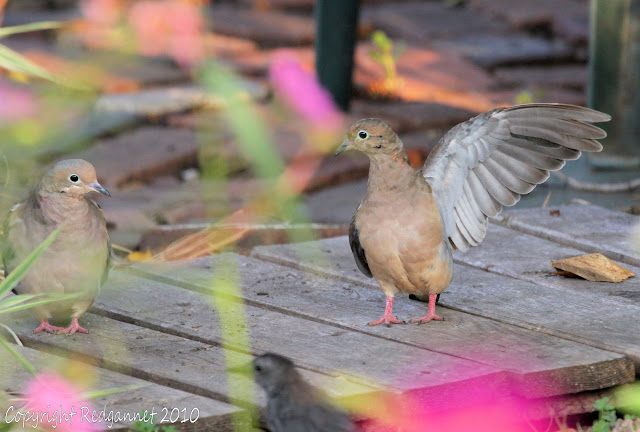 Odonata species; 2
Common Green Darner Anax junius 5, Blue Dasher Pachydiplax longipennis 3
My visit this morning was a brief one; just enough time to take advantage of the golden hours between sunrise and 09.00. I had wanted to go to Mount Auburn, but my information was that the gates did not open before 08.00 and that photography was not allowed. 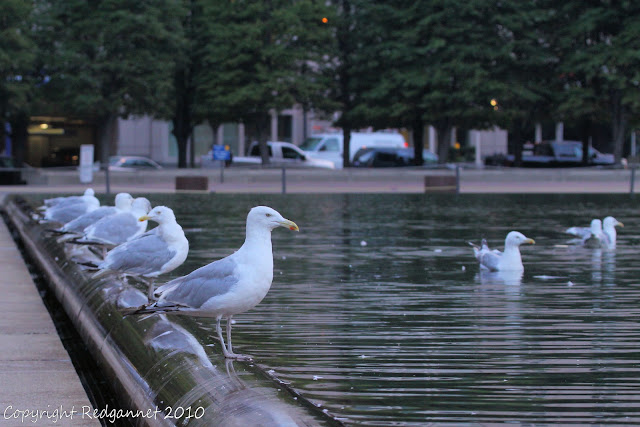 So I cycled the 6 blocks, cutting across the Christian science Plaza, to the fens for an early start and then made a fact-finding mission to Mt Auburn later in the day. I didn’t bring my camera as it was a very hot day at the end of August and I didn’t want to have to carry it around without being allowed to use it. However a gallery may be found at the cemetery’s website www.mountauburn.org
The lady at reception told me that I may in fact use my camera , discretely (to take pictures for private use only, but no photos of headstones) and that it might be possible to gain earlier entry if a work party starts before 08.00. It would be courteous to ask permission to use cameras and obtain a letter from the receptionist to avoid confrontation. The same lady will know about work parties and early workers arriving to open the gates. info@mountauburn.org Tel; 617-547-7105
The cemetery is 175 acres of mature trees in a stunningly scenic sculpted garden. Ground cover is scant as much of the ground area is taken up with well-tended memorials. The lakes used to have granite banks with promenades around them. These have been removed and bank-side vegetation has been allowed to grow. I surprised a Great Blue Heron in the reeds. He was obviously unused to seeing people here.
I felt as though I had the place to myself; it was as quiet as….. well, the grave, except of course for the coarse screeching of the Blue-Jays. A big party of jays, Northern Flickers and American Robins joined forces with the Grey Squirrels and Eastern Chipmunks to raise a riot in a tree near Memorial Lake. Surely it was a predator that was upsetting them, but I couldn’t see one. A while later, I heard the whinnying of a Red-tailed Hawk, but I couldn’t find that either. Having heard the Blue Jays imitating a red-tail in Central Park, it has not been included in the list below.
Bird species;