Last night, I took a quick run down to the seafront while there was still a bit of light left. 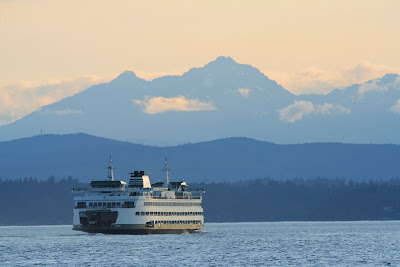 Seattle downtown looks out over Puget Sound and usually has a fair selection of gulls.
During the summer, most of them head north to breed, but Glaucous winged gulls are resident and were in good supply. 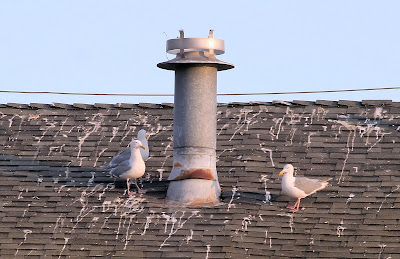 Some were coming in to roost and the Seattle Aquarium appeared to be a popular spot for them. 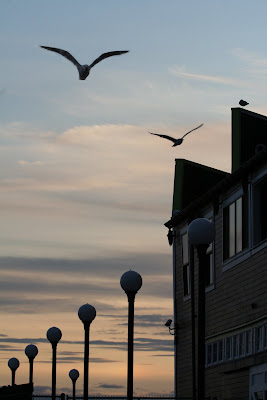 Can you spot the little Photoshop twist?
This morning, I am planning to go to the University district.
Montlake Fill was created last century when a canal was built to link Lake Washington with the inlet. The level of the lake dropped nine feet and a soggy parcel of land rose from the waters. It took its name from it’s original use as a landfill site, but now goes by the more appealing, Union Bay Natural Area. It is run with an adaptive management policy which responds to the dynamic nature of the habitat.It consists of small pockets of prairie and woodland with ponds, set beside the lowered Lake Washington. At this time of year, the prairies are bursting with flowers. 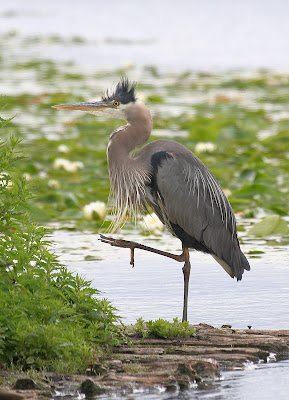 The shoreline is fringed with reeds and water-lilies. Overlooking the area is the stadium for the Washington University football team, The Huskies.
Bus no 43 leaves downtown Seattle from the corner of 6th and Pike at around 05.30. The concierge at the adjacent Seattle Sheraton Hotel holds timetables for all buses. It takes approx 25 mins to reach the stadium (fare $1.75), moments after crossing the canal.
Birds were evident almost immediately this morning. American Robins and American Crows were the first to be seen. I followed the canal west towards the boat club. 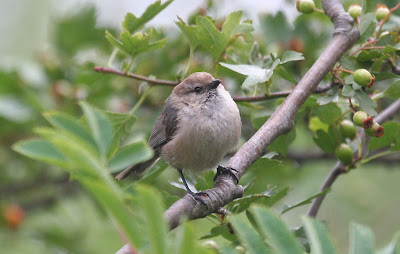 The bushes along the path were alive with chatter, hosting a party of Black-capped Chickadees and Bushtits. More robins and some Starlings were on the lawns by the stadium. Rowers were out on the water already, sculling between small flocks of Canada Geese and Mallard. I cut through the boat club and headed north along the lakeshore. Pontoons act as moorings and landing stages and I followed the urge to take a walk along one. A Great Blue Heron was picking it’s way towards me. Despite having seen me, it continued to approach. It was a very dull morning, so I had not yet taken my camera from the rucksack. A racoon flushed from the water’s edge and scrambled up a gnarly old willow. Cedar Waxwings and a spectacular male American Goldfinch eventually coaxed me to get the camera out before the light was really adequate.
A metalled road runs around the back of the stadium, heading north. I followed this beyond another boat club and turned to the right. Crows and Red-winged Blackbirds suddenly started making a lot of noise. 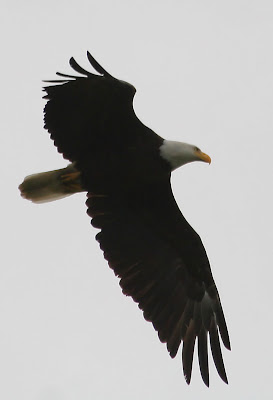 A Bald Eagle flew over mobbed by the smaller birds.
A very approachable Song Sparrow sat for a picture by a wooden bridge. 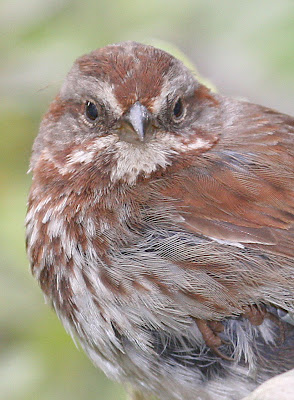 A Northern Shoveller and her brood of 7 shovelings were feeding in the stream as I crossed.
Now I was entering the Union Bay Natural Area. A well maintained path forms a loop around the main part of the reserve and I elected to go anticlockwise. House Finches and robins perched on a dead tree. Suddenly there was more commotion and I looked round hoping to see the eagle again. This time though, it was a Cooper’s Hawk. A pugnacious Anna’s Hummingbird, possibly 100th of the size (by mass) of a Cooper’s Hawk joined the robins and blackbirds to see it off.
After the hawk flew off, closely escorted by 2 blackbirds, I noticed an empidonax flycatcher on a branch of a willow tree. 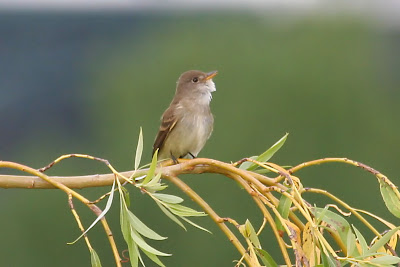 It was showing well and was singing. Normally, being both lazy and incompetent, I would give empids a cursory glance and then pretend I hadn’t seen it, but here was one that might be identified by it’s song. I recorded it on my dictaphone and tried to memorise it before looking it up. “Fits peeoo” was my best interpretation. “Fitz bew” from NG and “Rrritz-beyew” from Sibley was close enough. Add the fact that it was singing from a willow and I couldn’t avoid the fact that I had successfully identified an empid! A Willow Flycatcher. 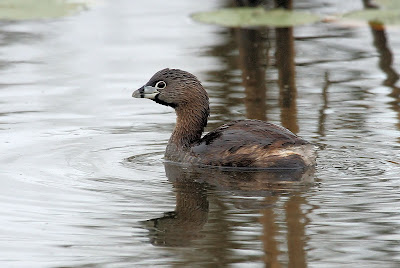 A nearby pond held a Pied-billed Grebe with 2 chicks and beyond it, a Marsh Wren sang from the reeds. I enjoyed the wren’s exuberant show for quite a while, amused as it danced around the top of a reed mace head, singing to all points as it went. 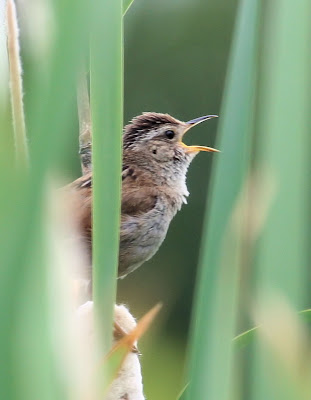 Common Yellowthroat lived up to their name today. They were as common as I have ever seen them with 5 males seen and others heard. 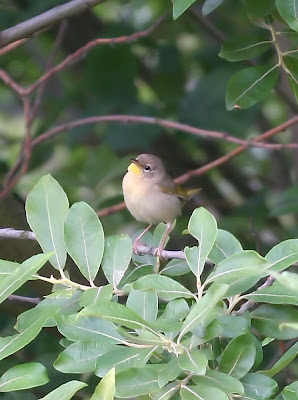 Only the females came out for a picture though. I followed a path round to the water’s edge. From here I could see 2 Bald Eagles way across the lake. Closer though were 2 local birders, Constance and Amy.
When Constance said she lived “here”, I assumed at first that she meant Seattle. But later it became apparent that she meant Montlake Fill. She has been birding on the reserve since the 80’s and cannot bring herself to adopt the new name.
As a great believer in local knowledge (I discovered that Constance is writing a book about the reserve), I wanted to tap her for some information about the gulls of the area which regularly hybridise. She threw my whole Seattle list into dis-array with her answers.
The “hybrid swarm” has been sent to challenge experienced birders of the Pacific North West and to confound beginners and visitors. A number of already similar and challenging gulls such as American Herring, Glaucous, Glaucous-winged and Thayer’s, exchange genes and physical characteristics to a bewildering degree.
I am usually very strict with myself before adding a bird to my life list, but once the tick has been entered, sorting through confusing birds becomes less critical and a “most likely” guess is adequate. I accept that this could potentially lead to a few mis-identifications, but I have to strike a balance between being reasonable and being anal.
Constance threw my lifers into doubt. She suggested that there are very few “pure” gulls around and that most of the NW gulls have contaminated genes.
A question occurred to me later that I wish I had asked: If there are only a few pure birds around, who is doing the breeding?
It is my understanding that hybrid off-spring are supposed to be sterile and incapable of subsequent breeding. Birds who are mating extraspecially are putting all their efforts into chicks that will be unable to continue the genetic line. Would this not eventually lead to local extinction? Did I understand her correctly in the first place? If you are reading Constance, there is a comments section at the bottom of the post.
Then she dropped the bombshell about the crows. If you have not visited North America, there are 2 crows which to all intents and purposes, are indistinguishable from each other. The American Crow and the North-western Crow are best identified, so I thought, by range. All my field guides tell me that they are almost mutually exclusive, although there is no physical geographical reason for this. According to Sibley et al, Seattle is within the North-west Crow’s distribution area and excludes the American Crow, but the local cognoscenti believe that the NW Crow exists only in small remote pockets and that the common corvid of Seattle is in fact, the American Crow.
There are supporters of the NW Crow and rival American Crow supporters with the threat of fisticuffs when the factions meet. The disputed reasons hinge on the crossover of size and voice which could go either way. So I shall have to reconsider NW Crows and their status on my Seattle list. Are the ones from Vancouver safe I wonder?
I walked with Constance and Amy for a while. We found a bushtits' nest hanging from a large tree. The bushtits had been disturbed during their first attempt at nest-building but had returned to try again and looked to be doing well. 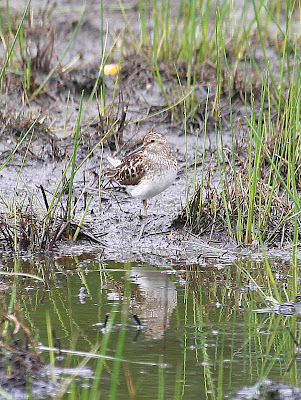 We passed the eastern pond which held some Kildeer and Least Sandpiper. Constance was full of information and advised on ID techniques for Least Sandpipers. Yellow legs and a middling brown not swaying either towards red or grey. I left them shortly after, but not before getting a useful site called “tweeter”, a forum for Pacific NW birders. Google Tweeter if you are heading that way.
I was pointed in a new direction by Constance and Amy and found a part of the reserve that I had not explored before. 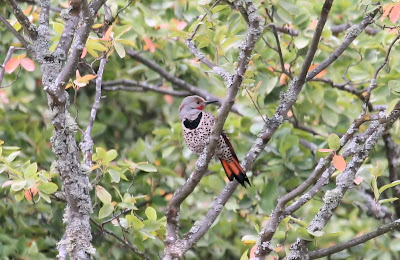 Amongst some bushes a Spotted Towhee churred and a Northern Flicker flashed it’s red undertail. A Lazuli Bunting had been reported and was breeding nearby, but I missed it.
The reserve only covers a very small area, but it had taken me nearly 4 hours to complete the loop. I suspect that if one was walking a dog it would take 45 minutes from the bus stop and back. But it was back to the bus stop for me now and just before I put my camera away, I got a really close shot of a crow. 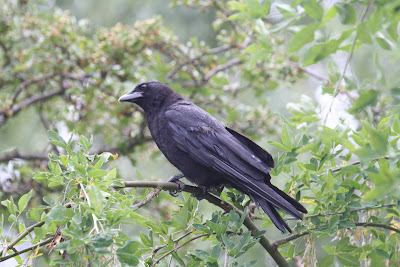