Back to where it all began

Nearly 40 years ago, my father went on a business trip to East Africa. Whilst there, he visited the Nairobi National Park and returned with some pictures of Thompson’s Gazelle, Crowned Crane and Black Kite. These pictures sparked the passion that still burns and I promised myself that when I was a big boy, I would, “go on safari, just like my daddy”.
Here I am, back where it all began in Nairobi NP.
The concierge contacted a company called Silverbird, who agreed at very short notice to take me out for a drive. At 07.00 the next morning, Anthony, the driver and guide was waiting for me and displayed a very gratifying sense of urgency to get me to the park in good time.
We entered from the Park Service headquarters on Lengatta Road. While Anthony completed the formalities at the gate, I scanned the lightly wooded car park and saw, Baglafecht’s Weaver, Streaky Seedeater, Cape Robin Chat, Speckled Mousebird and Pied Crow.
Almost as soon as we passed through the gates we encountered 2 Bushbuck feeding quietly by the side of the road. On the other side, a small group of 5 Baboons skulked in the undergrowth.
The light was poor again this morning and never really improved through the day. 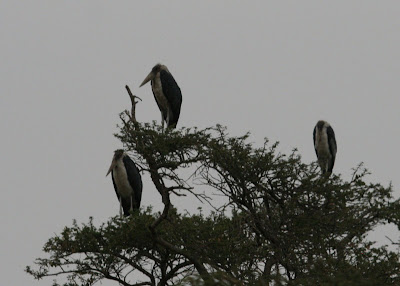 All the photos on this post were taken at 800 ISO in an attempt to get a reasonably quick shutter speed. Silverbird provides those flip-top type vans and I had one all to myself this morning, so I was able to use the tripod inside the van. Even so I still suffered from camera-shake for much of the early morning. 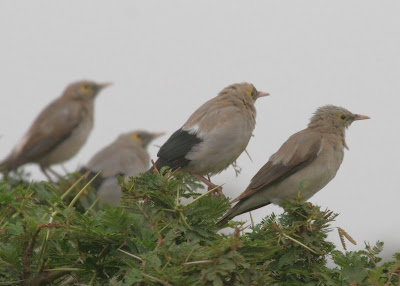 Wattled Starling
The first section of the park passes through a forested slope down towards the grassy plains. Here we saw, White-eyed Slaty Flycatcher and Common Bulbul.
Out on the grasslands I encountered the same problems that I had had in South Africa last month. The winter plumage of the weavers, whydahs and widders, caused me to make the choice between persevering with identification in poor light, or by-passing the tricky stuff and enjoying the other treats that the park may have to offer. The trouble I have, is always lack of time. Even just a few minutes spent poring over a field guide could be put to better use and avoid a mad rush at the end of the day. So, after a quick glance we pressed on. 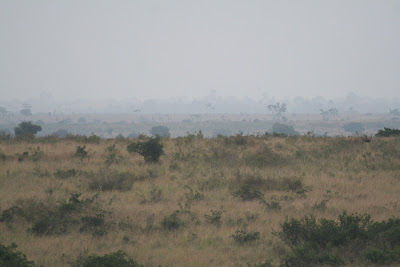 Acacias, damp hollows and shallow valleys break up the grasslands and on a pleasant day, provides beautiful scenery. Today all the colours were muted under the flat, grey sky. The mammals were everywhere. 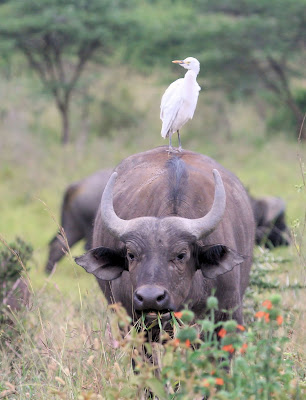 We passed through a large herd of Buffalo as they grazed both sides of the road with Cattle Egrets in close attendance. Mixed herds of Zebra, Eland, and Coke’s Hartebeest reached close to 300 animals at a time. 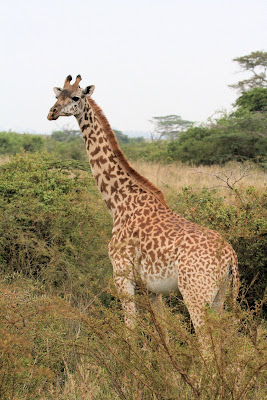 The road was blocked for a while by a group of Massai Giraffe, distinguished by the ragged shape of their markings. 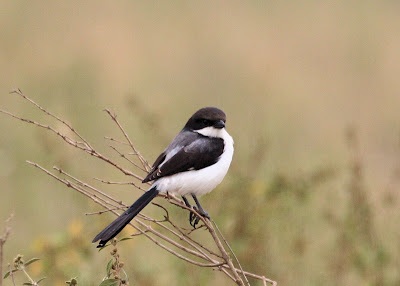 Long-tailed Shrike were common in the bushes along the road and a Northern Pied Babbler sat alone in an acacia.
Ahead, a group of safari busses blocked the road, and as we approached, a lioness crossed to join a second on the right side of the road. They quickly melted away into the grass, but the other vans were slow to move. Anthony spotted a Black Rhino on the other side of the valley while we waited.
Some LBJs are easy to identify. The Yellow-throated Longclaw for example retains plenty of clues even in it’s less showy winter feathers and the Rufous-naped Lark usually attracts attention through his clear whistled song.
Shortly after, another van indicated something interesting. It was another lioness. This one was thin and her nipples were pronounced. Anthony suspected that she was tending young cubs.
We had just passed some hartebeest which also caught the lioness’s attention. 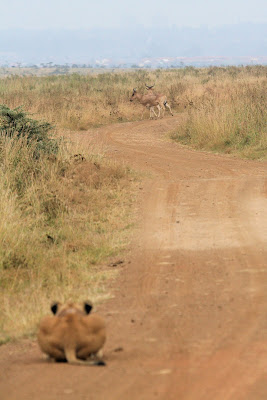 She hunkered down in the road as they crossed, to avoid being seen. Other approaching vans blocked her line so she turned her attention to another animal on the plains to our right. Each time the animal dropped it’s head to graze, or looked in the other direction, the cat would creep forward, stopping again when the hartebeest raised it’s head. The stalk took nearly 15 minutes to cover about 100m and she approached so close that she was almost under the antelope’s nose. 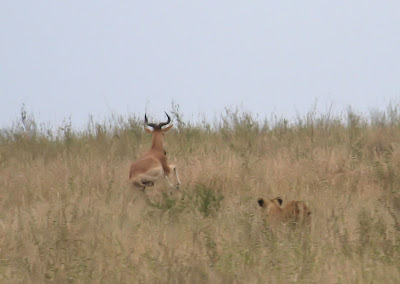 I could not tell if the lioness moved first, or if the hartebeest saw her and started running, but the chase did not last long with the antelope easily outrunning the hungry cat.
There was plenty of game close by and I expect she tried again, but more vans were arriving and I did not want to be part of a melee, jockeying for position. So we left and continued on to the hippo pools. An armed guard met us there and escorted me round a circular walk by the river.
The area was full of bird song and movement could be seen in nearly every tree. Fischer’s Lovebirds were especially vocal, White-bellied Tits, Common Waxbills and Red-billed Firefinches were all moving. A Black Cuckoo-shrike sat quietly, watching.
In the tall trees at the entrance to the loop, White-back Vultures waited for some wind and warmth to give them some lift to start their day.
Time had us at it’s mercy again and Anthony’s sense of urgency was showing again. He had another client at 12.00 and did not want to be late. 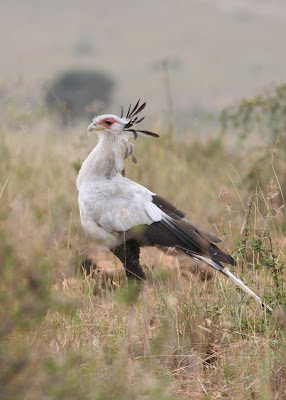 We had to forego a few birds to make up some miles. We did stop though for a pair of Secretary birds close to the road.
As we approached the turning for the exit gate, we had a yet another encounter with lions. A female with 2 cubs this time and a young male. 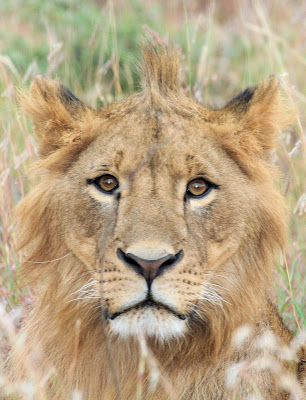 The male looked too young to be the father of the cubs and sure enough, a few moments later, a large male came sauntering up the track to join his family. 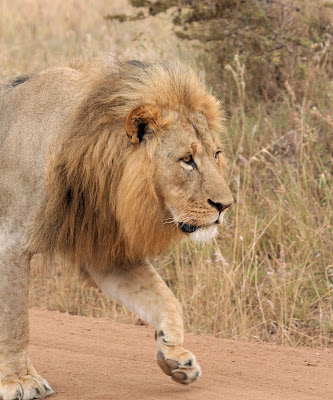 Yellow-throated Sandgrouse circled a small pond on the way to the gate and we stopped for some last pictures of some Zebra. 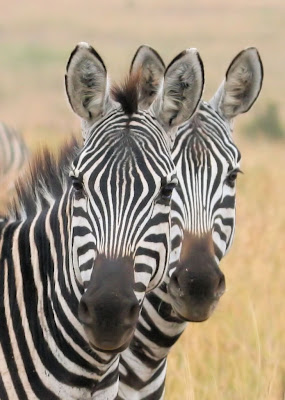 While the guard opened the gate for us, a pair of Superb starlings gleaned for insects among the grass and Rufous Sparrows flew up to the top of the fence. 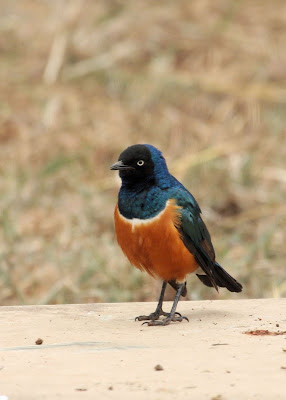 The drive cost $120. This includes the park entrance and 5 hours worth of driver/guide and van. It sounds expensive for one person, but would be far more cost effective with 2 or 4 people. http://www.silverbird-adventure.com/
Anthony was an excellent guide with good English and plenty of information. Birds are not his strength, but his easy manner and client appreciation made up for that.