I take it all back.

Despite what I have said in the past about Hong Kong Wetland Park, I had a glorious time there today. 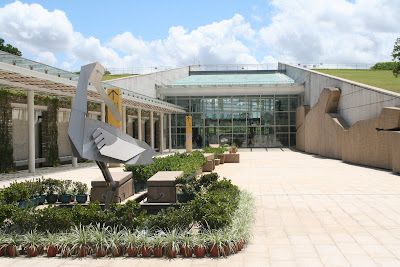 With weather still hot and unpredictable, I felt that with facilities to shelter from the rain and cold drinks and air-conditioning never more than 15 minutes away, it would make a good choice. 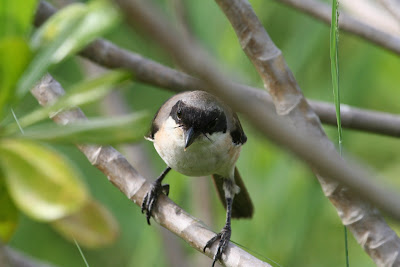 A Long-tailed Shrike hopped about in a low bush, but never quite got properly caught in the frame.
By chance, there was a dragonfly promotion on with daily guided tours and photo competitions. I knew that I would not be seeing many birds at this time of year, so it seemed a perfect way to spend a hot Hong Kong day.
I checked at reception where the chap told me there was a tour going “right now”. This pleased me intensely until, 30 minutes later, I found it was a flower tour. As I was the only client on the tour, we customised it and ignored the plants in favour of the dragonflies. Full marks to Wendell for flexibility and adapting perfectly to his group’s needs. 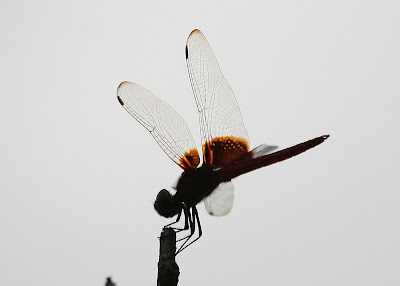 Our first dragonfly, at the top of a small tree was a Scarlet Basker. It was a female. The male was perched on the adjacent tree on a prominent perch. 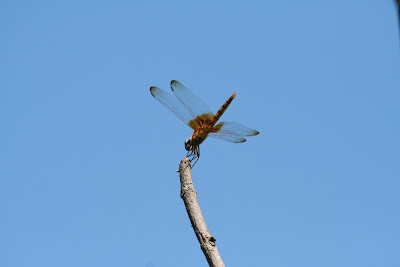 The Scarlet Basker male, superficially similar to the Crimson Darter, has 2 black dots on the dorsal side of it’s abdomen which the darter lacks.
We followed the stream path which, as the name suggests, runs alongside a stream. Info boards were placed at strategic points along the path, with odonta identification tips. The waterway is artificial and represents different stages of a stream’s passage over a short distance. It starts by flowing swiftly into a small pool, slowing in stages until it reaches a large pond. Wendell knew of some Asian Pintail that liked the common rushes and he quickly located some that I suspect I would have missed. So already he had earned the price of the tour which, incidentally, was free. 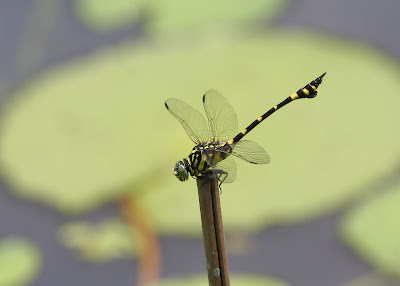 Then he pointed out a magnificent Common Flangetail, watching over his territory from a well-placed stick.
Damselflies and Dragonflies all have unique anal projections which are very useful for differentiating the species if you get a close enough look. Hence the popularity of the suffix -tail in common names. i.e. clubtail, hooktail, threadtail, grappletail, etc. These projections are used by the male to grasp the female during coupling and only fit neatly with others of the same species, thus avoiding the risk of hybridising.
Each species of odonata seemed to have it’s own preferred habitat and territory, such that Wendell was able to predict which one we would see next ”This is a good spot for Variegated Flutterwings”, he might say and sure enough, one would struggle into view battling against the slight breeze. 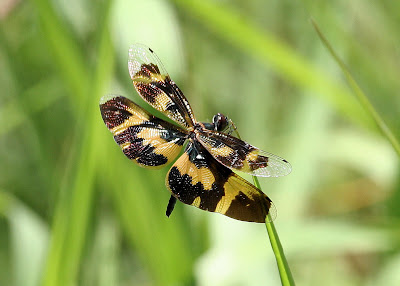 There is an aeronautical term which describes a craft with more wing surface area than is necessary. I don’t recall what it is, but it would describe the flutterwing well. It is not a creature built for windy conditions. Wendell observed that the females have a transparent tip to their forewings.
Next, we came to the Crimson Darter area. 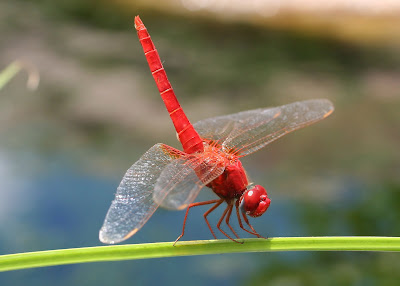 The male makes the name seem an obvious choice, but the female, though a delightful yellow, is dowdy by comparison.
The walk only lasted for about 20 minutes. I was having too good a time to want it to end, but Wendell had to go and show someone some plants.
Now that I was out on my own, I had no handy reference guide to identify any new species, so I had to keep referring back to the info boards. 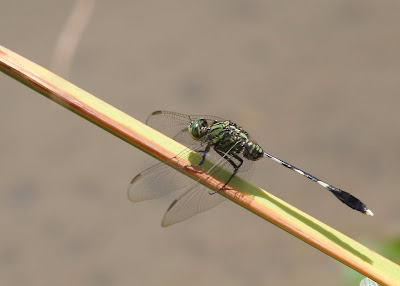 Shortly after Wendells’s departure, I found a Green Skimmer.
I criticised The Hong Kong Wetland Park previously for crowds and noisy children. My previous visits had been at the weekend so perhaps that was to be expected. I had hoped that it would be quieter on a Thursday. The crowds were less, but still noisy I am sad to say. Some showed a sense of propriety in the hides, but most did not. When one looks back out of the reserve into the town at the edge of the park, it’s popularity becomes obvious. Pressure on personal space in Hong Kong is severe. 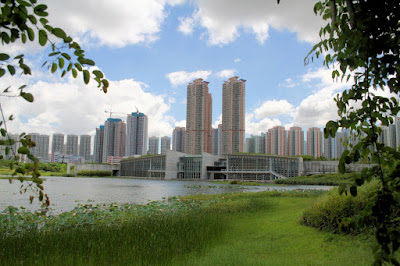 Only the super-rich have houses, with the huge majority of the population living in high-rise accommodations, jammed together with nowhere for the kids to run and make noise. Once they do get an opportunity to run and make noise…., well I guess it is only natural.
At the Mudflat hide, I actually did some bird watching. Some Black-winged Stilt chicks were close to the hide. The adults seemed to be caught in that classic parental dilemma whether to keep their offspring close and out of mischief or to give them a little independence, allowing them to forage by themselves.
A Little Ringed Plover was also tending young. The parent was guarding the tiny bundles of fluff much more closely than the stilts. Perhaps the greedy-looking Great Egret in the tree above gave her cause for concern. In the far distance, some Wood Sandpipers occasionally flushed along the edges of the reeds. 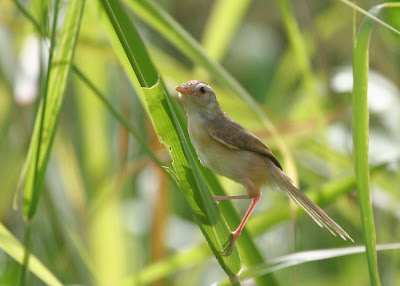 A Plain Prinia showed well close by.
At the river hide, a group of children were making so much noise, that I just had a very cursory glance before running away. A Common Kingfisher was perched on a low snag up near the bridge. In the mangroves lining the river were some breeding Cattle Egret. Little and Great Egret stalked the margins and exposed mud.
The tide today was predicted to be a very small one which was one of the reasons for not visiting Mai Po. Without a big tide, the birds can remain out on the mud in the bay all day. Only when the tide exceeds 1.8m will they be driven inland to roost until the water starts to recede again.
The security guards were still in evidence today. 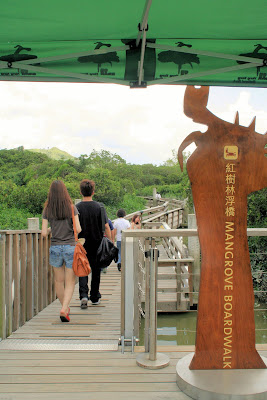 There was one at each hide and one at each end of the one-way mangrove boardwalk. The Fish pond hide was quiet except for a couple of Black-necked Starlings flying over.
From the third hide, back to the end of the one-way system is a boardwalk through a freshwater environment. Deep reed lined ponds followed by a marshy spot, with a butterfly garden in between. So back to the dragonflies.
Just at the edge of the ponds and the butterfly garden, was a hot-spot and I found 5 species without having to move. 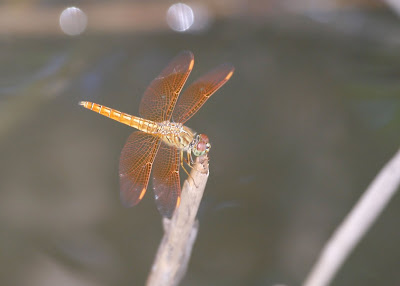 First to catch my eye was an Asian Amberwing. A female was basking in the sun on one side of the boardwalk and the male sat unobtrusively on the other side. 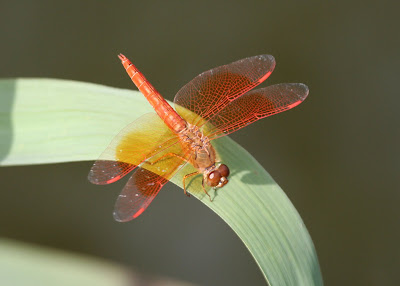 Then I noticed a beautiful glossy, black odonata just above the water surface. 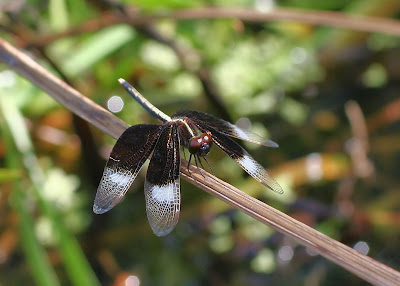 It was a Pied Percher. I mistakenly thought that the white line down the centre of it’s back was a highlight reflecting off it’s shiny skin. The transparent ends to the wings were not easy to see either, so when I came to compare it with the info board later on, I was looking for a jet black, short-winged insect. 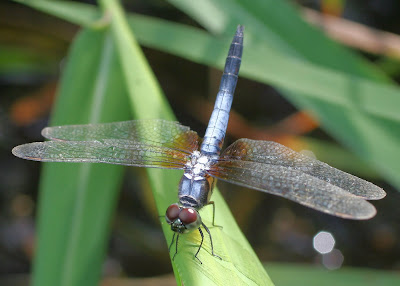 Right beside the percher was a Blue Dasher, close enough to use the macro lens. An Asian Pintail alighted close by, also in range of the 50mm macro. 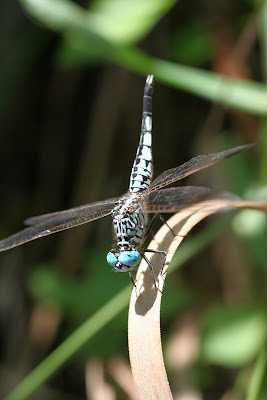 Up until now, I had been using the 100-400mm Canon zoom. It has a minimum focussing range of 1.8m, so I had almost stepped backwards off the boardwalk on a couple of occasions on order to achieve focus. The 50mm, Canon-dedicated Sigma 1:2.8, can focus within 5 cms. I laid out flat on the boardwalk and reached the camera across towards the dasher. The security guard caught me and, obviously considering me to be a trip hazard, ordered me to get up. Fair play to him though, when no-one was around, he allowed me to lie out again.
I was surprised at how close I could approach the insects without seeming to disturb them. At this point, I suddenly appreciated the purpose of “live view” on the viewing monitor. However, the results were far and away better than the big zoom lens. The detail was much finer with even the facets that make up the compound eye becoming distinct. This is the way forward; for macro photography, use a macro lens. I expect that this revelation will cost me a fortune in new lenses now.
My epiphany was interrupted by the fly-past of a large black dragonfly with a large white patch on it’s upper abdomen. 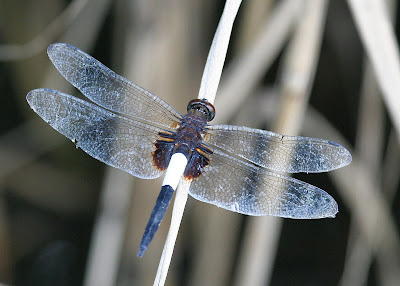 This was a Pied Skimmer. The limitations of the 50mm macro lens is that small, distant creatures appear small and distant in the photograph, so I switched back to the Canon and cranked up the zoom.
There is a butterfly garden separating the deep ponds from the marshy bit. 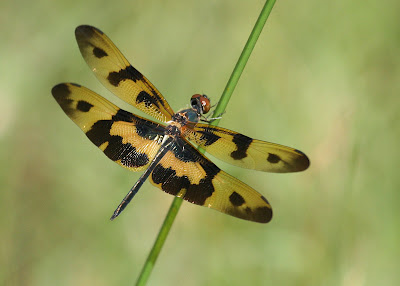 Here I found my first male Variegated Flutterwing. Beyond this in the shallow marsh, another hot-spot held both sexes of Crimson Darter, a Blue Dasher and a Common Flangetail. 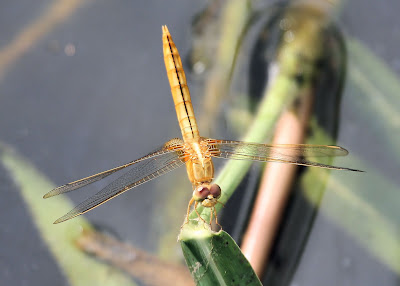 I had had enough now and needed to consult with the info boards back near the reception centre. As I crossed the stream where I had seen the first flangetail with Wendell, the first Damselfly of the day showed up. It skimmed across the surface of the stream as it flowed into the pond at the end of it’s course. Many damselflies have the electric blue colouration and the knack to identifying them lies in which abdominal segments are coloured and what shape the black dividing colour takes. I took a photo which will not grace this post unless my identification causes uproar at the H.K. Ordonatologists Association annual dinner, but which was sufficient to identify it as an Eastern Lilysquatter. If you need to know, the electric blue on segment 7 and 8 gave it away.
The cool and pleasant visitor centre has a café for cold drinks and a gift shop for dragonfly field guides. “Field Guide to Dragonflies of Hong Kong” by Kieth D.P. Wilson was my choice. It describes species within H.K., obviously, but also comments on their distribution and range beyond the former colony’s borders. This enabled me to identify some of the species that I have found elsewhere, especially in Singapore where all this odonata stuff started.
So the Hong Kong Wetland Park has redeemed itself in my eyes. I had not looked outside the park before and considered the pressures on open space when people live so closely together. But I am still confused at the amount of security guards needed to ensure that visitors observe the one-way signs.
To get to the Hong Kong Wetland Park, bus no. 967 leaves from Central bus station. It takes 50mins and costs HK$21.80. There is a stop immediately outside the visitor centre. The park opens at 10.00 until 17.00 with last entry at 15.30. Don’t arrive early, you will be forced to sit outside on the pavement. If you find yourself in this position, tease the security guards by taking photos of them. Admission costs HK$30. Tours are available from the visitor centre and docents are positioned around the park to answer questions. Security guards keep you upright and travelling in the right direction while ensuring that the park is probably one of the safest swamps in the world. Biting insects were insignificant today, but bring repellent anyway. Sunshades and hides are positioned through the park, but much of it is in full sun.
Posted by Redgannet at 14:31