Weather predictions For Hong Kong this week included heavy rain from bbc.com, storms from cnn.com and warnings of typhoon from our national crew member, Flora. 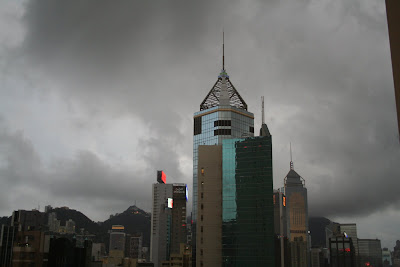 Advice to stay indoors is hard on an agoraphile such as myself. Since recent forecasts by mere mortals such as the Met Office had been so badly wrong and given that I had a permit for Mai Po, I decided to throw myself on the mercies of the Weather God. It was already 32C at 05.45 and wet, though not actually raining.
The MRT starts running at around 06.00 and takes about 1hour and 15 mins to travel between Causeway Bay on Hong Kong Island and Sheung Shui on the mainland. Bus 76K takes another 20 mins to reach the end of the road leading to Mai Po. If ever an opportunity arises to visit Mai Po, I always elect to walk the last kilometre or so along the approach road. A separate list for this morning would run to 22 species.
The approach road is lined with fish ponds which attract Chinese Pond Herons, Great and Little Egrets, all of whom were stalking the margins. A couple of Black-crowned Night-herons roosted in some overhanging bushes and Plain and Yellow-bellied Prinias flitted amongst the reeds. White-breasted Water Hens skulked around the edges of the redbuds.
In the trees were Magpies, Oriental Magpie Robins, Spotted Doves and the ubiquitous Chinese Bulbul. On the wires were Black-necked Starlings, Chinese Starlings 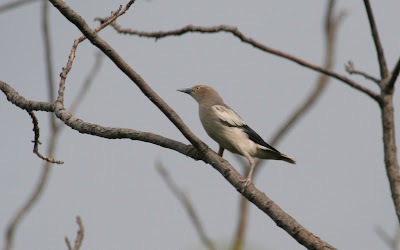 and Crested Mynas.
So far the Weather God, if not smiling on me, was at least turning a blind eye. It was hot and sticky; rain was threatening, but holding off. It was never going to be a good day for taking pictures, so don’t let your expectations for this post run away with you.
The Peter Scott Residential Field Studies Centre acts as a reception and permit desk. Permits to visit Mai Po must be applied for in advance publicvisit@wwf.org.hk A board outside detailed recent sightings and one in particular caught my eye. Painted Snipe had bred at the reserve and lucky bird watchers had been seeing their chicks at Gei wai 16/17. Gei wai are prawn ponds created by impounding an area of mangroves with an earth wall or bund. Clear areas are cut and the water levels are controlled with sluices. I did not rightly recall whether I had seen Painted Snipe before. I vaguely recalled seeing one at Bharatpur in 1996, but I was not a seasoned birdwatcher then and had simply accepted Martin’s word for it. I would be pleased to have a proper good look at one.
The high tide due at 09.30 was forecast to be a big one of 2.8 meters. The recent and impending storms may have encouraged a few birds in to shelter. So the obvious choice was to stake out Gei wai 16/17, where raised islands gave the birds somewhere to roost and 5 hides gave birdwatchers somewhere to watch them do it. I had had a rather aimless plan of sitting and waiting to see what showed up, but now I had a target bird and, possibly, a lifer in the shape of the Painted Snipe.

Egrets and herons were abundant along the way as were many of the other resident birds; Oriental Magpie Robins, Masked Laughing Thrushes, prinias, starlings and bulbuls were all very evident. With the winter visitors and the passage migrants gone, the resident birds were taking their chance to shine.
A few birds appeared out of season. A non-breeding flock of waders is usually found at Mai Po and a few White Wagtails showed up.
Hide No.1 looks up the length of gei wai 16/17 with about 15 hectares of shallow water and flat islands visible. I had arrived shortly before high tide and the wader flock were already in place in clear, but distant view.
In their non-breeding colours, I was frustrated by the Redshank until they flew. Without the white trailing edges to the wings, they must have been Spotted Redshank. Also roosting on the bar were Caspian Tern, Black-headed Gull, Whimbrel, Eurasian Curlew, Black-tailed Godwit and a couple of Pacific Golden Plovers. Herons and egrets were working the shallow water and

3 Black-faced Spoonbills were roosting and preening. Black-winged Stilts patrolled the margins, never straying too far from their nests.
I noticed a stilt chick tottering down to the water’s edge, just a bundle of fluff on ridiculously long legs. I moved the scope to get a better view. As I was watching, from the long grass just beyond the chick, 2 Painted Snipe chicks appeared. They were barely visible and stayed out for a very short time.
By sheer dumb luck, I had put myself in the only position that the chicks would have been visible from and had been looking through a scope at the time. They were too distant to have caught my unaided eye and binoculars would not have been enough to get a decent look.
I judged that Hide 3, which was sited further up the gei wai on the southern side, may be closer and might just give me the chance of a photograph. Indeed the hide was directly opposite the clump of grass. Although I saw something moving in the grass, there is no way that I could have told what it was if I hadn’t seen them from the other hide. So I was very fortunate to have been in the right place at the right time doing the right thing in the right direction.
The Painted Snipe is an odd bird. In the absence of a photograph, I shall attempt a quick resume.
From the family Rostratulidae, the Greater Painted Snipe shares the family name with only one other bird, the South American Painted Snipe. Two subspecies occur, Rostratula b. benghalensis and Rostratula b. australis. There is some cause to consider R. b. australis as a separate species.
Sexual roles are reversed with the female being the brighter plumaged of the sexes. She is bigger and takes the most active role in defending territories. She may have multiple mates and takes the initiative in calling for them. The male does all the incubating. They are probably more closely related to jacanas than to true snipes. 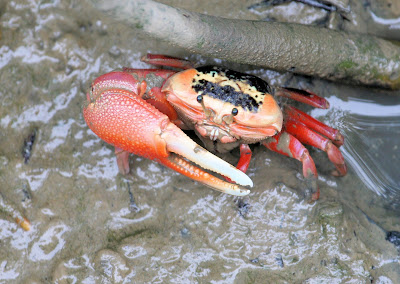 The tide would be retreating by now and I hoped that as the water flowed back into deep bay, the waders would follow it and come out to feed on the mud, giving me a closer look at them.
The day was getting very hot now and sticky, sticky, sticky. It was a very uncomfortable walk out onto the floating boardwalk through the mangroves to one of the hides looking out onto the mudflats. Deep bay has been getting progressively shallower due to silt and the tides don’t always reach as far up the mud as they used to.
Recently the Hong Kong Bird Watching Society built a new hide that reaches further out towards the incoming tide. From here, I could see plenty of egrets, herons and waders.

Sadly they were all clustered around the old hide. I guess that the original hide had been well positioned in a place where the water drains away first. With such a high tide, it should have occurred to me that the water would easily reach the original hide and that this would be where the birds would come to feed first as the water receded and the mud became exposed.
Ah well….! The birds did eventually deign to come and feed near my hide, but no closer than I had already seen them. 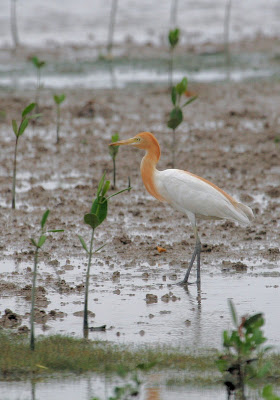 A flock of Common Greenshank had joined the party.
The birds receded with the tide and soon all I was left with were the crabs and the mudskippers. A flock of Barn Swallows kept them alert and sent them scurrying for cover each time one flew low, close to the mud. 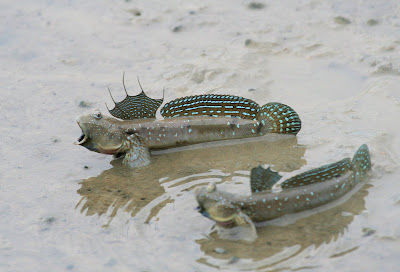 Two mudskippers were challenging for a special piece of mud while another flipped himself exuberantly into the air, possibly to attract a mate, but more likely to attract the attention of an egret. 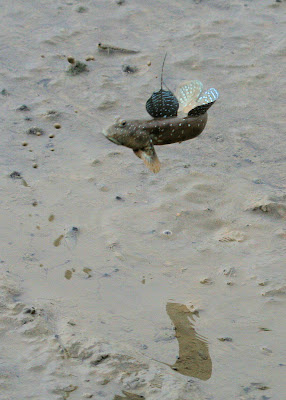 The Weather God was becoming impatient now. The sound of a storm came up ”like thunder outer China ’crost the bay.” The sky was black and a wind had started to whip across the water as if preceding rain. I had ridden my luck long enough and began the trek back home. The return walk was accompanied by rumbles of thunder and the wind was becoming stronger. It began to rain as I approached the bus stop and by the time the bus arrived, it was pouring. I added a couple of species on the way back, a Common Kingfisher and a Greater Coucal. I even chanced a stop to try a photo of a female koel high on a dead tree. I also managed to get some photographs of dragonflies today and even managed to find a name for one of them. 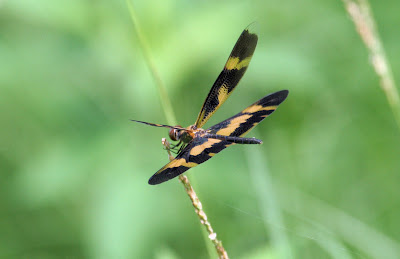 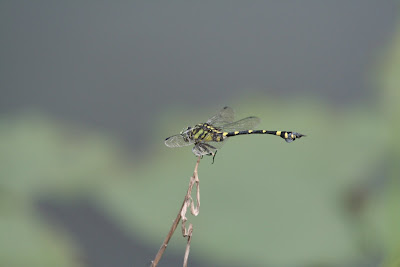