In my past, as an angler, I spent thousands of hours on the banks of rivers, streams and lakes. Now, as a birdwatcher, I am still to be found skulking around the edges of watercourses. After all that time I didn’t expect to find much that was new and amazing during a quick trip to Tylands Barn in Maidstone, Kent. 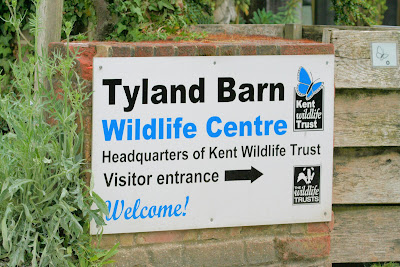 Tylands Barn is the headquarters of the Kent Wildlife Trust http://www.kentwildlifetrust.org.uk/ and has a small pond for dipping. I had gone there this morning to feed my growing habit for dragonflies. Instead I witnessed something that I would have pooh-poohed if I had not seen it for myself.
As I was trying to get a focus on an Azure Damselfly, I heard a splash and looked up. A male blackbird was coming to the ground on the gravel path just beyond a platform used for pond dipping. Large ripples were developing in the middle of the pond. The blackbird dropped something from it’s beak as it landed and proceeded to thrash it against the ground. It was a newt. 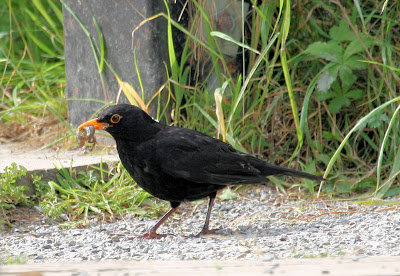 In the time it took for me to look up, no other bird was visible.
The spray from the splash was in the direction of the blackbird’s flight.
There are no fish bigger than sticklebacks in this tiny pond.
I am tempted to assume that the blackbird was fishing. Not Kingfisher style, nor Osprey-like. I did not see the actual catch, but would suspect that he saw the newt at the surface, swooped across the pond and picked it out as a frigate bird might take crabs off a beach. It is possible that it was opportunistic and that the blackbird saw the newt as he crossed the pond. The ripples emanated from the edge of some submerged weed. 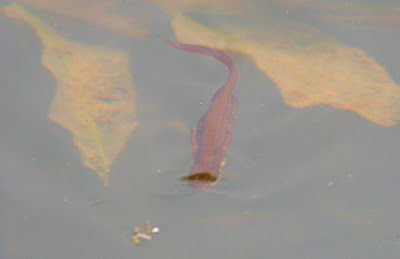 Could he have used these as support while dipping for the newt?
He did not make enough of a splash to make me think that he had plunged into the water and he still had a good momentum as he crossed the barrier for the platform. These points make me think that he picked the newt from the water as he flew over.
Newts are amphibians and can move about on land. It is possible that I could have been mistaken. Perhaps the newt was crossing the path when the blackbird flew by. The blackbird may have dropped what was already in his mouth in favour of a bigger meal. 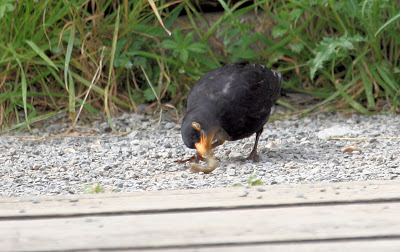 There were no remains when I went to inspect the spot afterwards and I don’t think anything else would have made the splash. So I still believe that the blackbird was fishing. 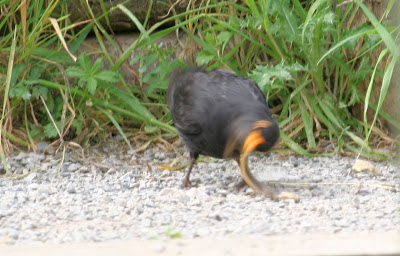 He thrashed it against the gravel path too subdue it then hopped back up onto the platform barrier before flying off. 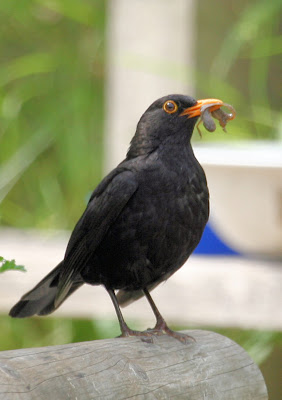 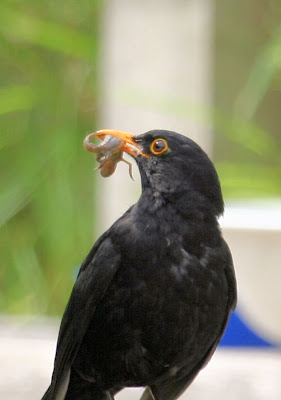 A witness speculated that he was adapting to conditions to feed his family. I must check up on the weather and worm availability for Kent over the past weeks. All my literature tells me that he should be looking for worms and other invertebrates to feed his family. If in fact he did pick up the newt off the path, he would probably not be the first blackbird to make a taxonomical error. But, could he be the first to actively fish from the middle of a pond?

Its an odd phenonmenon that when birdwatching, I am increasingly distracted by dragonflies and reptiles. On my first trip dedicated to dragonflies, I witnessed something ornithological that I would not have given credit to if someone else were to tell me about it. Ain't life fickle.