This was to be my first visit to the Peach State of Georgia. My visit to Atlanta, would allow me a full morning and I wanted to make good use of it. My friend and colleague, G.L., had provided me with some potential sites to visit, I had picked one and was on my way.
MARTA (the Atlanta public transport provider, $2.25 train, $1.75 bus one way)( www.itsmarta.com )is clean and easy to use. Once on the platform at Peachtree Centre, I noticed a large map which showed the train lines and all the buses that connected with them. 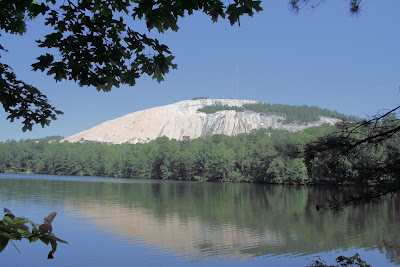 Out to the West of the city was a large patch of green that was serviced by buses 120 and 118. This green area was marked as Stone Mountain Park. I had seen this from the plane during our approach to ATL and had hoped to find out some more about it.
Atlanta is surrounded by forests and leafy suburbs, but Stone Mountain Park stood out on account of the great big stone mountain in it. The single rock, reportedly the biggest lump of grey granite in the world, measures 5 miles around and rises 630 feet above the surrounding area.
As I am often prone to do, I changed my mind and my plan for the day, in favour of a trip to Stone Mountain Park.
I alighted at (MARTA) Avondale and linked with the 120 bus which runs every 40-50 mins(even on a Sunday), and took 30 mins to make the journey to Stone Mountain City. The title City may have been mis-used in this case. Stone Mountain City is a touristy village in truth with a Park'n Ride on 4th St. From 4th St bus stop, continue North for 100m and turn right onto East Mountain Rd. 400m ahead are the railing gates which open into the carpark at the West end of the monolith. www.stonemountainpark.org
At 08.00 on a saturday morning, the carpark was already full and people were jogging and cycling around the 5 mile perimeter road. Many of these people should not have been jogging and 3 ambulances were standing by outside the gates. Atlanta's nickname is the city that is too busy to hate. What, I wondered, would happen on a Saturday morning when they had a bit of time on their hands?
I felt my way around the park, picking out a couple of likely looking areas from the site map. I shall describe the route I took, but bear in mind that I will recommend a different way round at the end of the piece. 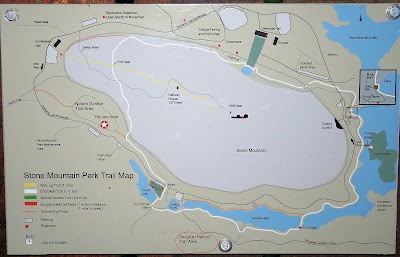 The map as shown above indicated a Nature Trail and a Songbird Area. These spots were best reached by setting off around the Perimeter Road in an anticlockwise direction.The Nature Trail was clearly marked after less than a mile. Once off the road and away from the joggers,walkers and wheezers, I quickly ran into some birds. Nothing spectacular, cardinals, gnatcatchers, and towhees, but at least I was in the woods. A large party of Carolina Chickadees passed through, accompanied by a couple of Tufted Titmice and a Ruby-throated Hummingbird.
Black-capped Chickadees range into Georgia along the Great Smoky Mountains. Their southern limit reaches nearly to Atlanta, but I don't think they quite make it to Stone Mountain. The 2 species of chickadee are very alike so I was pleased to hear the Carolinas confirming their identity in song which is faster and higher than that of the Black-capped.
The Nature Trail forms a loop that connects to the Cherokee Trail. I followed the Cherokee Trail back across the road (the joggers were thinning out by now) and continued through the forest largely composed of Hickory, Beech and White Oak. Shortly, I reached a lake over which some Northern Rough-winged Swallows swooped while a Great Blue Heron preened on a snag by the far bank. 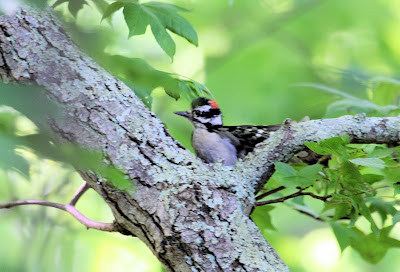 A pair of Downy Woodpeckers fed a hungry chick and a Northern Cardinal called from high above. Carolina Wrens called from some low thickets.
The Cherokee Trail looped around the back of another lake before returning to tarmac on a spur road. I followed this road towards my second interesting spot, the Songbird Area. Just before I reached it, I was sidetracked by the Kentucky Picnic site. In here, I met the only other birder of the day. Paul kindly showed me a way through the picnic area to a platform overlooking a meadow. This was once the velodrome and archery area for the Olympics in 1996. Now it had been reclaimed for the birds. Sure enough there were some Blue Jays, American Goldfinches, Eastern Phoebe and to my delight, a lifer for me, some Eastern Bluebirds.
The bluebirds were chasing the jays between the trees dotted in the meadowand would not sit for a picture. 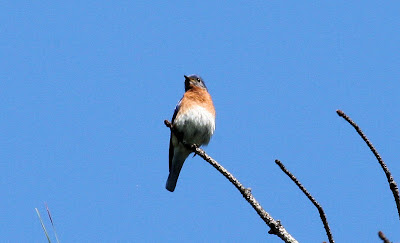 Only one sat still long enough on a high, distant perch in a dead tree, just showing it's red breast.
The songbird area also has a looping trail which takes one out into the meadow and then into some younger pines. 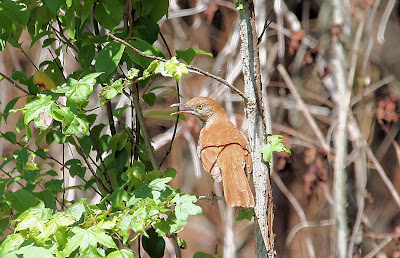 The banked sides of the meadow held Brown Thrasher and Grey Catbird. The trees held Brown-headed Cowbirds, Tufted Titmice and gnatcatchers.
We cut back across the road to rejoin the Cherokee Trail. I left Paul here and doubled back along the base of the Stone Mountain. Paul had told me that Brown-headed Nuthatches were to be seen in the stands of pine growing in clumps on the rock. The Cherokee Trail skirts over the lower Western end of the dome and the Nuthatches are said to be common here.
By now the temperature was up beyond the mid-80's. I didn't much fancy climbing up onto the rock where there was very little shade, but the Brown-headed Nuthatch was a target bird for the trip. Mercifully, the climb was not too strenuous and I had topped up my water content at a conveniently placed water fountain. The pine clumps were made up of short, stunted trees and I was feeling confident, but I missed the nuthatch.
For my next visit I will try a different route. I will start from the gates at the West end of the rock. From here the Up Trail leads in an easterly direction, up the mountain at an acceptable gradient. After a short way, The Cherokee Trail crosses the Up Trail. This is supposed to be the Brown-headed Nuthatch's favoured territory and I think an earlier visit would give me a better chance next time. The Cherokee Trail connects to the Nature Trail and from here, and the previously described route can be re-adopted for the rest of the morning.
After leaving the park and returning to Stone Mountain City, I saw Chimney swifts and a Red-headed Woodpecker. The 118 bus from the Marta Park'n Ride goes to (MARTA) Kensington.