Meigs Field used to be an airfield on an island just south of downtown Chicago. The Mayor caused quite a furore when he shut it down overnight and the concierge was obviously still put out about it while pointing it out to me on the map.
Although the due processes may not have been followed, I still maintain that it looks better as a nature reserve than as an airfield. 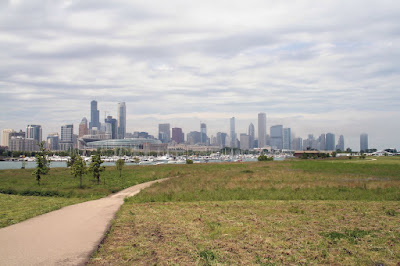 G.L. had given me some specific directions and instructions. G had told me that he had previously seen Dickcissel there, so I was on a twitch. 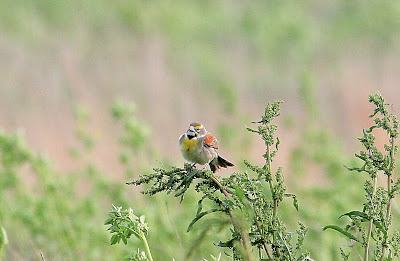 The weather was dreadful, but it was only a 15 minute cycle ride from the hotel and a small search area. An easy lifer, what could be better? But the weather quickly took a turn for the worse. Even though it was raining when I left the hotel, it was still reasonably warm. This didn't last long. Suddenly a cold wind picked up and the temperature fell quickly. The wet and the wind was making it very uncomfortable, but at least the wind was behind me and was blowing me along.
I turned onto Northley Island by the observatory and continued South, passing Soldier Field Stadium over on the mainland. My instructions were to search the loop at the far end of the island where there was a small, managed prairie. This area is quite exposed and the wind was pressing much of the vegetation close to the ground. Big white-crested waves were forming on the lake and it was becoming very cold.
For no special reason, I elected to go anticlockwise around the loop. A large sparrow-like bird was obeying his instinctual directive and, trying to cling to a stalk, was calling for a mate. I admired his determination but did not give much for his chances in these conditions. If I tried that at home, my wife would make rude gestures through the window, but would not be tempted outside. 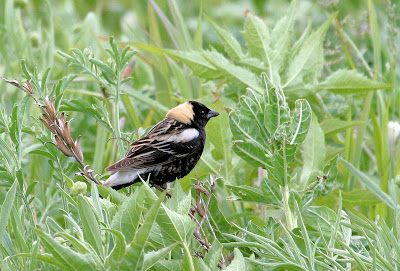 It was a Bobolink male in his full breeding regalia of pale crown and nape with matching patches in the wings. A non-breeding bird nearby would occasionally launch itself into the teeth of the gale and be whisked away downwind. The breeding bird would react to his breeding imperative again and chase after it. Like a airborne dogfight, he followed the jinks and turns of the other bird in front then banked sharply like a Spitfire peeling off from formation and was sucked away by the the storm. Having chased off the lesser bird, he dragged himself back up-wind to start his singing over again. I did not even bother to take the camera out of the bag. I was shivering by now and the results would have been worthless. The pictures here were taken the next morning when things had brightened up a bit.
Further around the loop in exactly the place G had described, I heard the call that I had been listening out for. Now I was at the most southerly point of the loop and was looking back up the island, into the wind. The bird, I suspect, was turning his head as he called causing a ventriloquial effect and combined with the wind, this was making him very difficult to pinpoint. Eventually, I managed to triangulate his position by moving up and down the path, changing my perspective. It was indeed a Dickcissel trying to stay low, beneath the wind, but still compelled by the need to breed. He was clinging to a madly waving flower stem, looking splendid in his yellow vest and black cravat, singing to attract a mate. 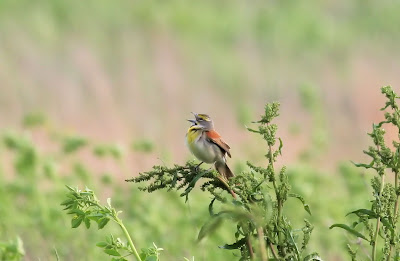 The wind that had been behind me on the way down was now against me. Nearly 45 minutes later, I reached the hotel sodden and shivering.
Storms were predicted for the next morning, so I lay in and later met with some colleagues for breakfast. By 10.00 it was looking as if the meteorologists had got it wrong, so I took a quick ride back to Northerley Island to see if I could get some photos to illustrate this post. It would be a shame to find 2 lifers and have no pictures to show for them.
It was still windy. Well it is Chicago, but it was much brighter and I was able to get some photos. 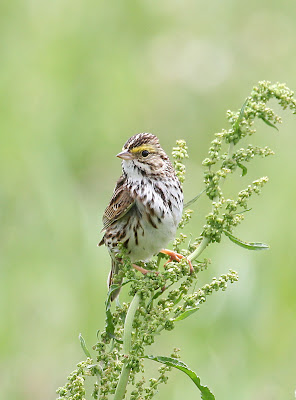 There were Red-winged Blackbirds and Savannah Sparrows calling from the flower stems. They were quite approachable but the Dickcissel and Bobolink stayed obstinately distant. 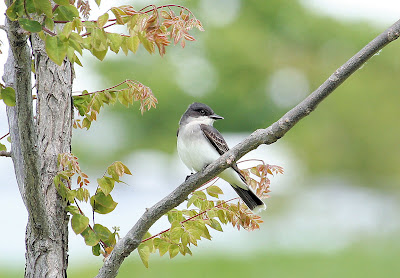 To add to the Northerly Island list I found Spotted Sandpiper, Blue Jay and Eastern Kingbird.
Thanks once again to G.L. for the information. 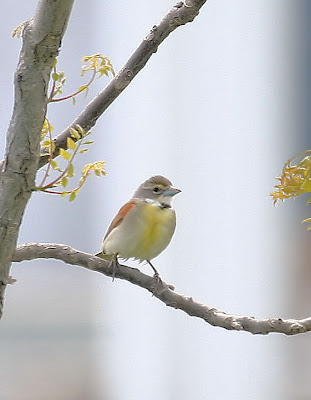