I had planned a delicious post of photographs from my most recent trip to Hong Kong.
It would have included shots of the rare Black-faced Spoonbill, and a very approachable Yellow-bellied Prinia. But, sad to say, I tripped over my tripod last week and gave the camera a fearful wallop. So it is at the menders this week and you will have to form a mental image. To help, I have include a few pictures of some of the birds mentioned.
As my luck has been running of late, the trip was not a great success. I went to the recently created Hong Kong Wetlands. There were more security guards here than I have ever seen at an airport and their sole purpose seemed to be keeping me out. I was not even allowed into the car park to look at some White-eyes flitting in the trees. (The picture below was taken on the Peak Circular Trail at Victoria Peak on the main island of Hong Kong) 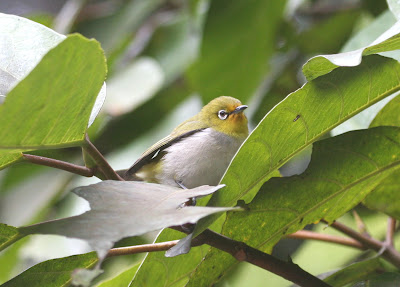 Ostensibly the HK Wetlands look like a birders paradise. There are boardwalks through the mangroves and excellent hides overlooking mudflats and a tidal river. There are bird descriptions and permanent scopes in each hide with an attendant who wipes the scopes’ lenses every 30 minutes or so. There are local docents who will help identify tricky waders and of course a security guard at each hide.
So why don’t they open before 10.00?
There is a huge airport-style terminal building, all glass and steel which houses a wonderful interpretation centre, restaurant and retail opportunities. You enter and exit through turnstiles, under the watchful gaze of the ever vigilant ecurity force, but not before 10.00!
At 10.00 on a glorious Saturday morning there was a long line of children and families out to have a great day in the sanitised, manicured wetlands. I sincerely hope that they did. It is a great place for children to run and shout and throw stones at the crabs. But it is not a place for the serious birder, and by serious, I mean a birder with no sense of humour. I found this an adequate description of my mood on this otherwise glorious Saturday morning.
I had originally planned to visit the world renowned Mai Po.
To visit Mai Po requires a permit which I had not been able to obtain. Despite an initial application and two reminders to the relevant website, I did not hear back from them. It was a long way to go to be turned away, so I elected to try the HK Wetlands instead.
I got there at what I assumed to be a reasonable time to arrive at a swamp to find my way barred by the first guard of the morning. Backed up by two colleagues he gestured me away holding up two handfuls of digits to indicate that 10.00 was the reasonable time to arrive at a swamp. The tide was due to reach it’s peak at about 10.00 so I was missing the golden hours as the birds fly in to roost away from the rising waters. It was made all the more frustrating that I was not even allowed into the car park during my 2 hour wait. I sat on a low wall outside and did some guard spotting instead. I think they found it unnerving which cheered me up a bit. I counted 16 guards around the car park and in front of the Visitors Centre. The most obvious bird of the area outside the park were the bulbuls, mostly Chinese (or Pale-vented Bulbul. The picture below was taken in Shanghai), but also a few Sooty Headed Bulbuls. 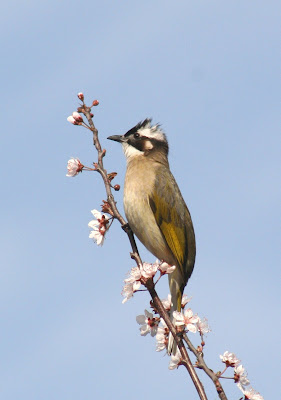 Once 10.00 came and went, the guards seemed to relax and at last I was allowed in.
In front of the Visitors Centre is a freshwater lake which held 20+ Garganey this morning. Many were already snoozing gently with their large white eye-stripe still clearly visible resting on their backs. There were also herons. Lots of herons. Greys mostly in this area, but there were also Great and Little Egrets in abundance as I passed through the landscaped wetlands.
At a 3-storey hide, I looked out onto the tidal river that flows into Deep Bay. There was a small mud-bank, at the far end of which, was a Black-faced Spoonbill scything through the water with it’s spatulate bill. This was a youngster with a pale bill and a small amount of black facial skin. Shortly a mature bird, obvious from the more extensive black facial skin and the shaggy crest, joined the younger one. They fed together for a short while and then tucked their bills into their backs for a nap.
There were plenty more herons and egrets from the hide as well as some White-breasted Waterhens, Common Sandpiper, Cormorant and Eurasian Wigeon. A Black-eared Kite, sailed across the mouth of the river. (The picture below was taken from Victoria Peak on the main island of Hong Kong.) 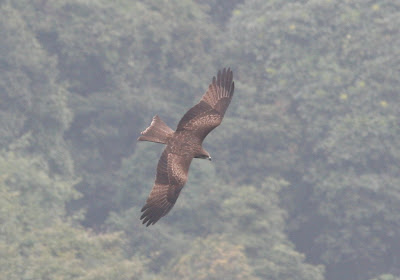 The next hide was a managed mudflat. Here were more roosting spoonbills and more egrets with a couple of Intermediate amongst them. Far in the distance I made out some Wood Sandpipers and one of the local docents pointed out a Siberian Stonechat and a small gathering of Temminck’s Stint.
At each hide there were loud children and complacent parents. Not a good mix in the circumstances.
To be fair to the HK Wetland, it is a very picturesque place to spend a Saturday morning. They have built a fantastic educational facility and it is well attended by school parties and large groups. They have provided a safe and managed habitat for the birds and have made the wetlands accessible to everyone.
My big bone of contention is the oppressive presence of the security force and their opening hours, 10.00 ‘til 16.00.
Time and tide are important factors for wetland birders. I feel that these considerations should be taken into account when setting opening times.

Mind you, if my recollection serves me well and I was in a mood to be balanced, I would remind myself that Mai Po does not allow birders past the guard post before 09.00.