It came as a shock to hear from Wikipedia that Fort Mason covered 1200 acres. The green area on the map gave no indication of such scale, but I have since learned that much of this area encompasses the piers, wharves and warehouses that make up Lower Fort Mason. Upper Fort Mason, which was to be the focus of my attentions today, covers (this is just a guess) probably less than 50 acres. Even more restrictive than this, I barely wandered beyond the area marked as West Battery, which can be seen at Google Earth ref; 37 48 27.85N 122 25 40.71W. 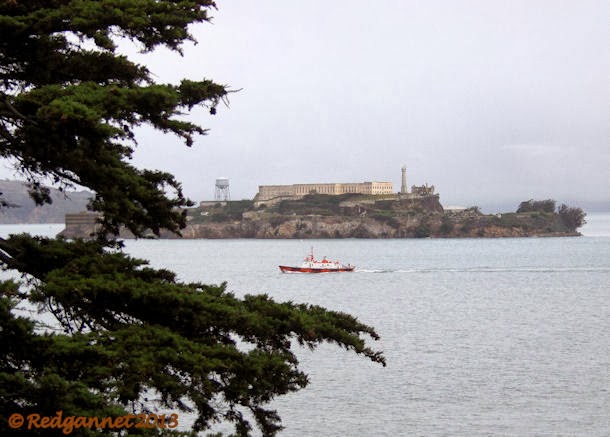 First bird of the day was an exotic parakeet which I believe may have been the Red-masked Parakeet.  This was closely followed by a couple of Pygmy Nuthatches, a single Townsend’s Warbler and large numbers of Yellow-rumped Warblers. The Yellow-rumped Warblers were feeding from the lawns by Quarters 1, beneath the General’s gum trees. It seemed as though their frontal feathers had been matted together; perhaps the ground gets greasy from the gum trees.
I followed the road around and quickly found myself at the West Battery. This was a pleasant, quiet spot on a Monday morning and proved to be the most productive area of the outing. 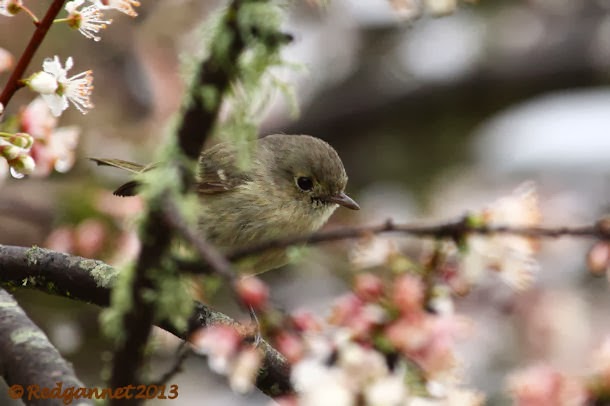 Ruby-crowned Kinglets, Anna’s Hummingbirds, White-crowned Sparrows and American Robins were all seen in a very small area close to the canons. Western Scrub-jays, Fox Sparrows and a Hermit Thrush were seen in the ivy by a flight of stairs that led down to the piers. 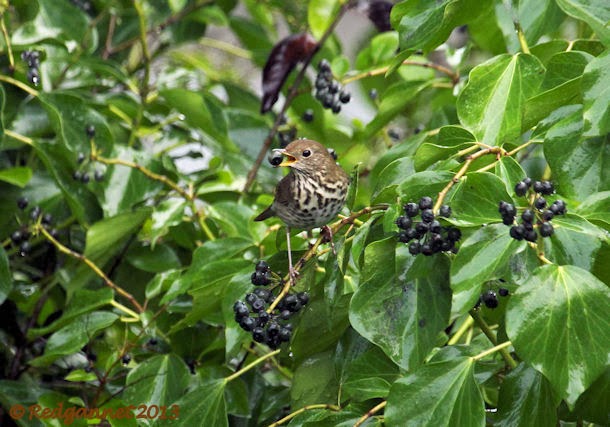 I was intending to wander out towards the lawned area, but workers in hi-viz vests, brandishing leaf blowers, put me off that idea. Instead, I took the steps that led down from the park and onto the waterfront. I was stopped near the bottom by a Red-breasted Sapsucker that was maintaining its sap wells in a tree close to the steps. 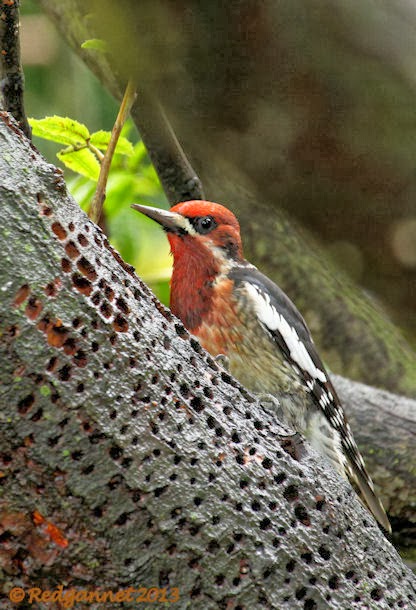 Each time it set off from the nearest grid of wells to inspect its territory, a Townsend’s Warbler flew in and drank at the gouges in the bark. A 10,000 Birds post will deal with this in more detail soon. 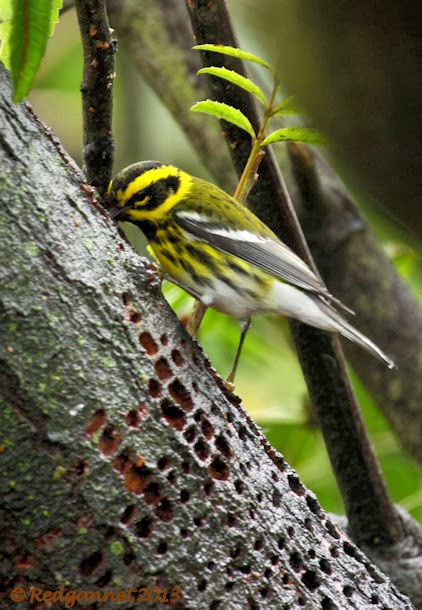 As I was watching, a birder who introduced himself as Bob, happened by. He was familiar with the sapsucker and knew the area well. He told me of some likely spots nearby, but most interestingly, mentioned the possibility of a Wandering Tattler at one of the piers in the immediate vicinity. 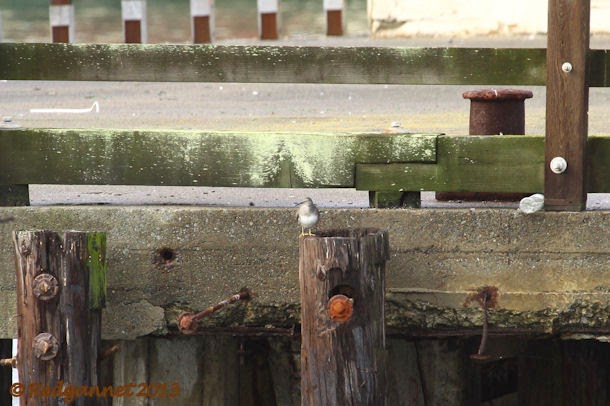 We took a stroll down to the bottom of the steps and stopped for a Common Loon and a scan across the harbour before walking out onto the hook-shaped pier. Bob knew exactly where to look, but no tattlers could be seen. We checked from different angles as they sometimes tuck themselves in behind the fence, but still we had no success. We were just cursing our luck when a short-legged yellowlegs flew up onto one of the supports and teetered briefly before settling down to preen. 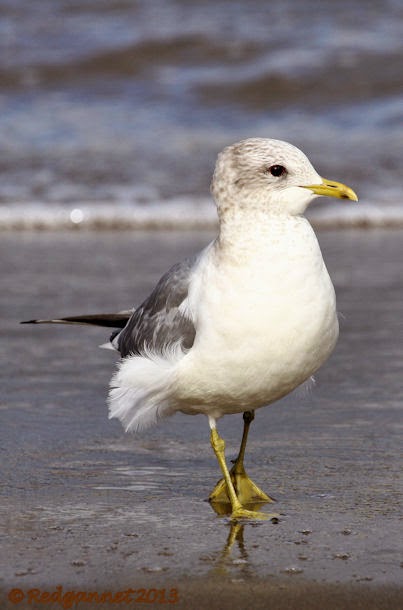 The sweep of the beach in front of Aquatic Park held a few gulls, notably an accommodating Mew Gull and a young Heerman’s Gull that was obviously full on handouts and couldn’t be bothered to fly away. 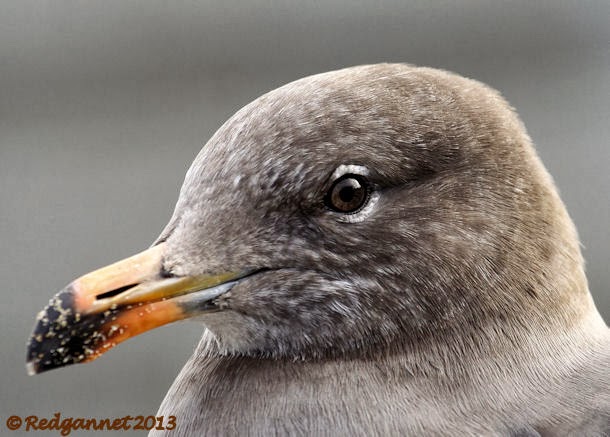 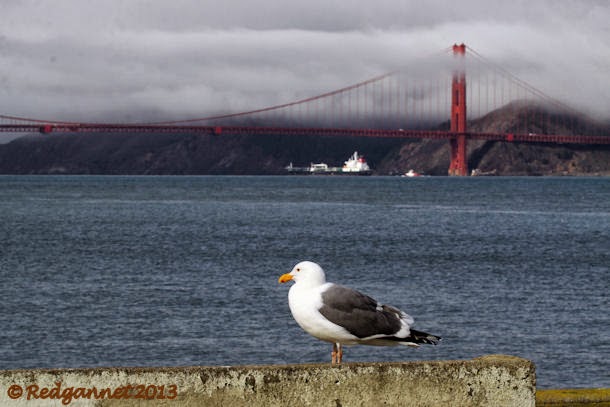 I caught bus no. 30 from 3rd St, just south of Market. It cost US$2 and took around 25 minutes to reach the stop at Van Ness Ave and North Point St. If you prefer to do the tourist thing, the San Francisco Trolley Car that starts from Market and Powell terminates at Aquatic Park, very close by.
I did not see any indications that access is denied at any time. There are a few private residences and a hostel on the site, so I guess they will need access at all reasonable times. 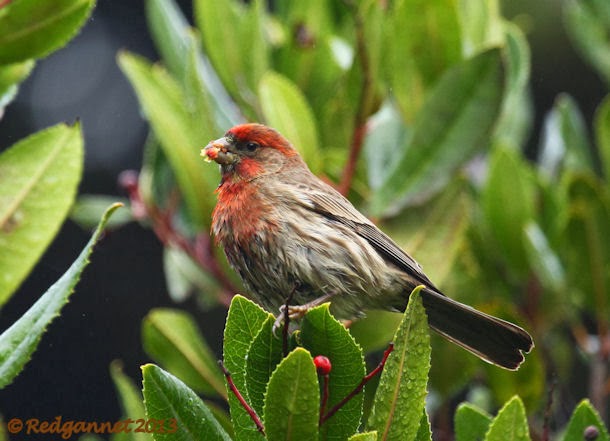 Visit the dedicated USA and Canadapage for more posts from San Francisco, including; Golden Gate Park and HalfMoon Bay.
Birding, Birdwatching in San Francisco, California.
Posted by Redgannet at 23:45