Coyote Point on San Francisco Bay was chosen for today’s outing to avoid the horrible weather coming in from the Pacific. The high ground protected the bay from the worst of it, but the day was still grey and wet. Half of me was wondering if I could have tolerated the pelagic trip that would have been my first choice in better conditions, while the other half concentrated on keeping the water from filling the eye cups of my binoculars and telling the first half not to be so stupid. 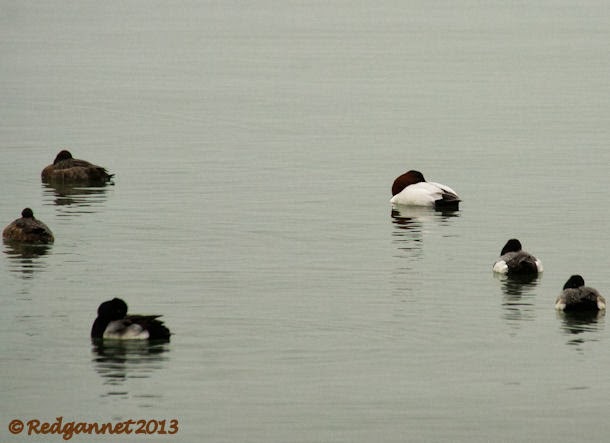 I approached Coyote Point along the bayside cycle trail from just south of San Francisco’s International Airport, SFO. The water was calm and there were a few ducks to be seen. Canvasbacks stood out by virtue of their white back and large size. They were mixed in amongst some sleepy Great (probably) Scaup. 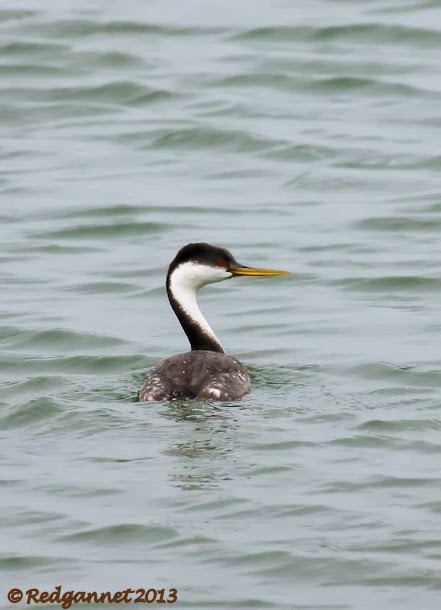 Horned Grebe and Western Grebe were both seen quite close to the shore, but it was the Willet posing on the shoreline rocks that encouraged me to get the camera out. 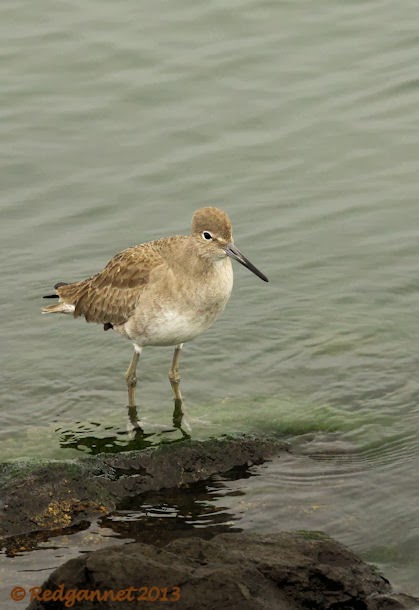 This outing also took in eBird’s hotspot at Sanchez Creek Lagoon (Google Earth ref; 37 35 17N 122 20 54W). I had arrived shortly after high tide and was hoping to find some wading birds roosting or feeding in the salt marsh at the western end of the lagoon. Apart from a small flock of Black-necked Stilt, there were none.
A Great Blue Heron and a couple of Snowy Egret were seen by the banks with Mallard, Bufflehead and a single Common Goldeneye on the water. Bushtit, Western Scrub-jay and Chestnut-backed Chickadee were seen in the bushes and trees as I cycled along the path, heading east. 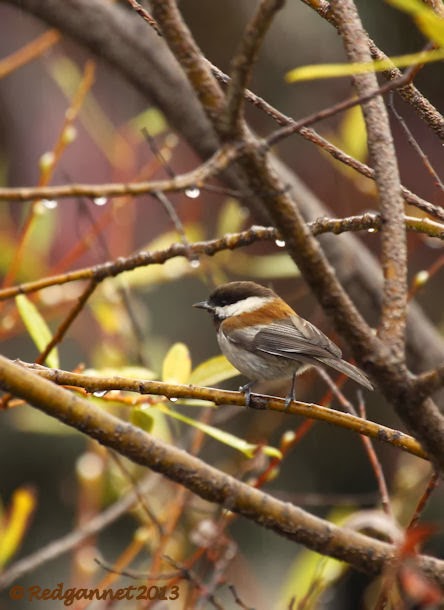 After crossing a small bridge and passing along Beach road, I was back on the bayside trail with Coyote Point rising ahead of me. A mixed flock of gulls were roosting beside the path. I was pleased to see them at close quarters so that I didn’t have to stand around in the wet trying to identify them at distance. 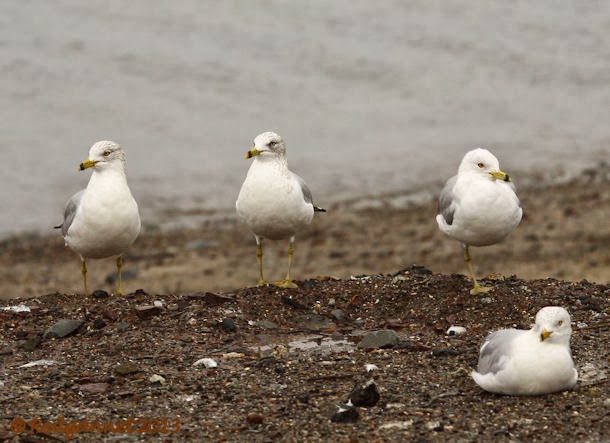 Ring-billed Gulls were easy to pick out and a couple of Mew Gulls were seen down on the water. California Gulls made up the bulk of the flock with a few Western Gulls staying slightly removed from the rest. 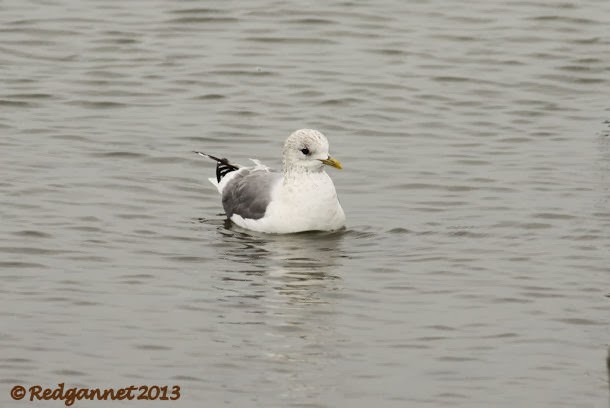 More Willet picked along the shoreline rocks as the eucalypt-covered headland loomed before me. I climbed, staying close to the edge and was able to look down on a Spotted Sandpiper while a few Yellow-rumped Warblers and Dark-eyed Juncos flitted through the trees. 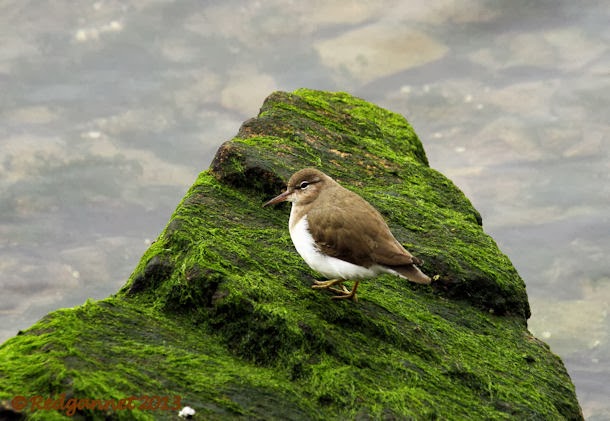 I didn’t stop long in the stand of alien gum trees and came down off the headland, passed the marina and turned my attention to the small area of mud beyond. Two bars almost meet on the far side of the mud and the small gap allows the tide to flow in and out of the hotspot known to eBird as Coyote Point Country Park – Harbour and Marsh. The two bars looked like a slightly open carabiner and held some roosting gulls. I didn’t pay these much attention, but managed a quick look at a bedraggled Forster’s Tern. 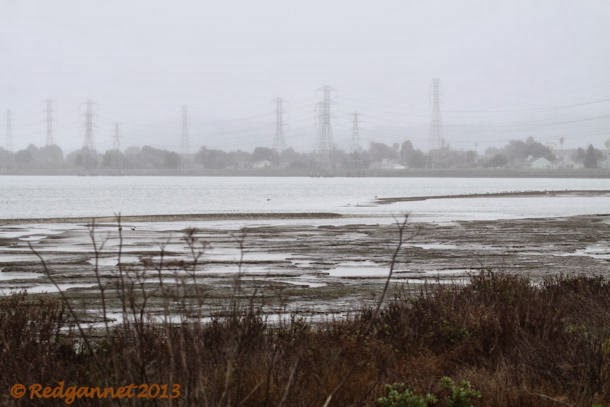 The mud was not as busy as I had hoped. It was only a small area and perhaps it can’t support the large numbers of birds that can be seen further down the bay at the Palo Alto Baylands. The birds were mostly Willets with a few Whimbrel and Longbilled Curlews. 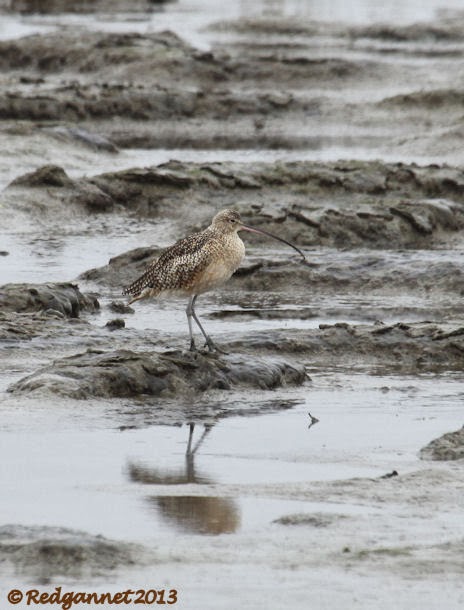 A single Marbled Godwit stood out warm brown against the Willets’ grey. Least Sandpiper were identified from a flock of “peeps”, but there may possibly have been some Western Sandpiper amongst them. 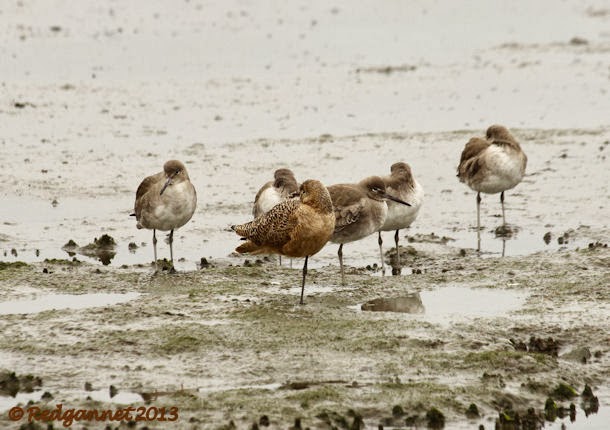 A man-made reef beyond the roosting bars was studded by Double-crested Cormorants, Western Gulls and a single Brown Pelican. The reef protects the mud and the harbour from bad weather, but the conditions today were merely persistent, but by the time I reached the fresh water marsh, they had become intolerable and after flushing a Wilson’s Snipe and noting a pair of Pied-billed Grebe, I decided to pack it in for the day. 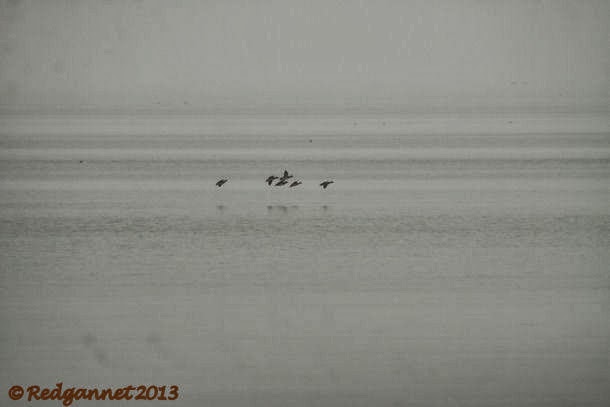 I travelled from the San Francisco Caltrain Station at 4th St. and Townsend to Broadway Station (Google Earth ref; 37 35 14.86N 122 21 44.64W. The journey took just 30 minutes.
A 2-zone day pass for Caltrain costs US$10. Note that southbound trains start before 05.00 on weekdays, but the first train at weekends is not until 08.15.
The Caltrain track passes very close to the bayshore just to the south of the airport. Broadway Caltrain Station is sited within 600m of the shore and a pedestrian bridge gives easy access across Highway 101.

Coyote point was an island before a land reclamation scheme (originally intended to provide grazing for cattle, but now utilised as a golf course) united it with the mainland. It did its duty during WW II as a Merchant Marine Cadet School and more recently, the Coyote Point Museum was re-branded as “Curiodyssey”, a child-focussed wildlife and nature experience.