Proposed new legislation may allow companies to redirect their property portfolios to help shore up their under-performing pension funds. Administrators at APS and NAPS have been quick to see the potential for reducing their deficit. 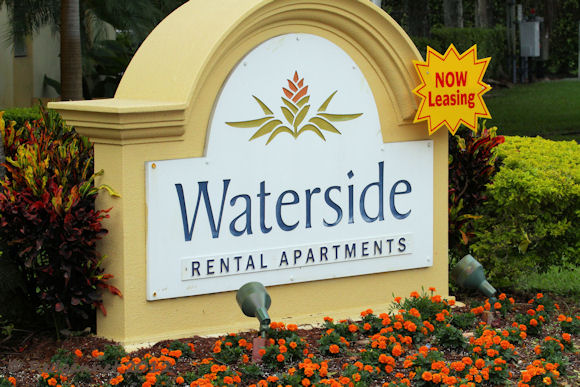 The Miami skies were laden with dark, heavy clouds and I had delayed my adventure as a dawn shower passed through. I was returning to Matheson Hammock, but this morning, I wanted to explore the inland part to the west of Old Cutler Rd. SW 52nd St cuts off from North Kendall Rd and access can be had through a small barrier that denies access to unauthorised persons (Google Earth ref; 25 41 10N 80 16 36W ). The barrier is universally ignored, especially by dog walkers who gathered in large numbers this Saturday morning. A reedy pond can be found on the right immediately beyond the gate and would be worth a look after the dogs finished swimming. In the distance peacocks were calling and parrots screeched from the tops of palm trees. Another palm tree by the road hosted an Eastern Screech Owl. 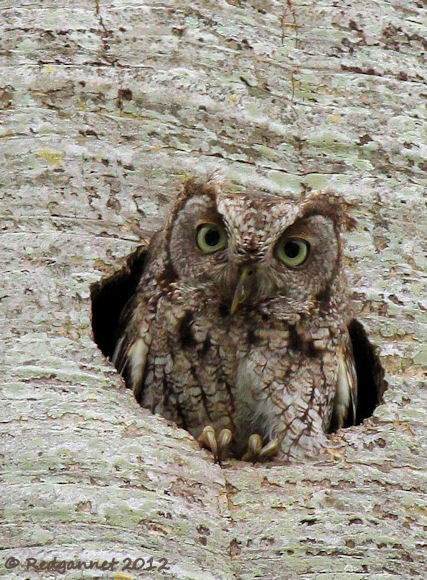 This individual appears to have quite a long, wry overbite. Is this normal in Eastern Screech Owls? Common Starlings and a pair of Red-bellied Woodpeckers shared the palm trunk and all made their home within easy reach of each other. . 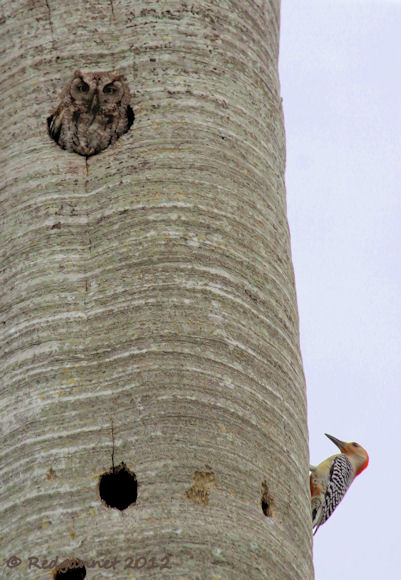 I was still hoping to find some migrants after the disappointing show yesterday evening and was pleased to see a Great Crested Flycatcher on the utility lines. Across the road, another GCF was chasing a vireo through a leafy tree. Anywhere else, I would have assumed that it was a Red-eyed Vireo, but in Florida, there is the chance of the very similar Black-whiskered Vireo. The bird was driven off by the flycatcher and I didn’t get a good chance to see the ‘whisker’ needed for a confident identification. Rather gallingly, it probably was a Black-whiskered as they are more commonly seen in Florida at this time. Most Red-eyed reports appear to come from birds returning south in the late summer and autumn. 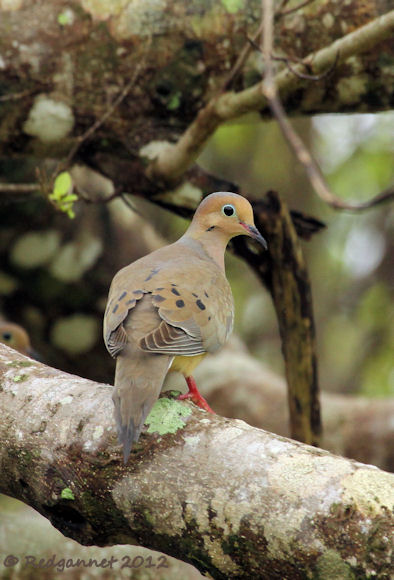 Mourning Doves were seen in the woodland here and Eurasian Collared Doves were common along the roads. A track leads east towards a marshy corner of the park. After rain there was half a chance that some snakes might be out to catch some sun and I had to tread carefully through the long grass to get close to a Golden-winged Skimmer. 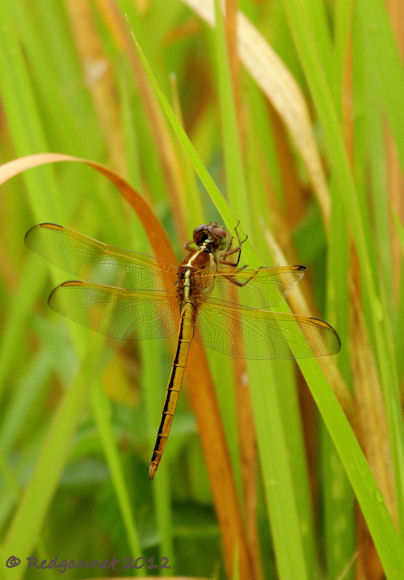 A flock of Cedar Waxwings had flown over a couple of times and now I found them settled into the bare branches at the top of a dead tree. Another path leads out from the park towards Old Cutler Rd. and emerges opposite the Fairchild Tropical Gardens. The flashlights on the wing of a Black-throated Blue Warbler showed up in the gloom of the understorey. 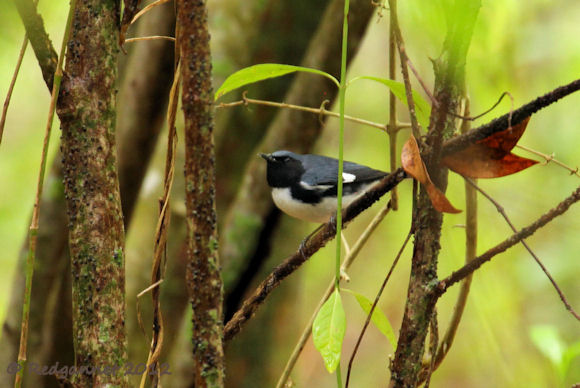 Now I was back on familiar ground and hoping to find more birds than yesterday, but only the Northern Cardinals called from the picnic area and a Black Vulture was seen in the distance. An American Great Egret stalked the edge of the Alligator pond and caught a small fish. 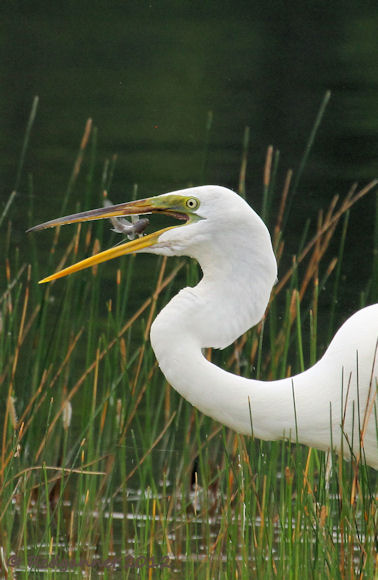 The road leads through the mangroves and a Racoon crossed ahead of me. A booth takes fees for parking, but bicycles and pedestrians pass for free. A road to the right leads to Matheson Hammock County Park which I must explore on my next visit. There are a lot of reports from this area on eBird. Continuing straight past the booth brings you to the car park. A Laughing Gull was begging for scraps from people in their cars. 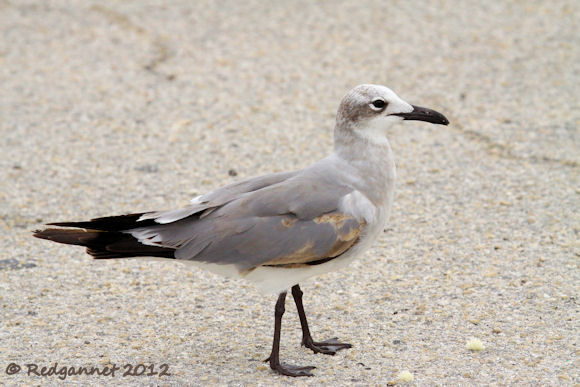 As yesterday there were no birds out on the banks or in the grassy shallows. A kite surfer was standing out on the bank with the water up to his thighs. Perhaps the height of the tide or the presence of the surfers could have something to do with the lack of birds. 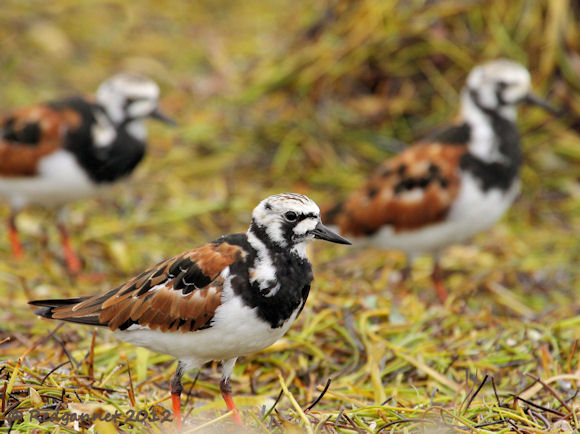 Sea grass has been washed up along the shore by the car park and the Ruddy Turnstones were feeding here with a few Semipalmated Sandpipers. 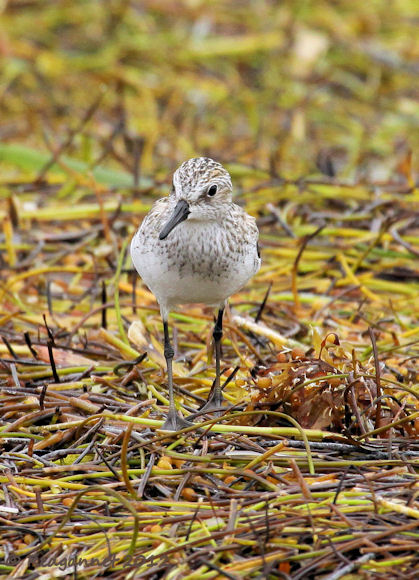 This is the first time that I have been able to see their semi-webbed feet as they stepped across the sea grass. It was interesting to note that the webbing is not apparent when the bird lifts its foot and is sometimes more obvious when the webbing stretches across a grass stem with a toe either side . 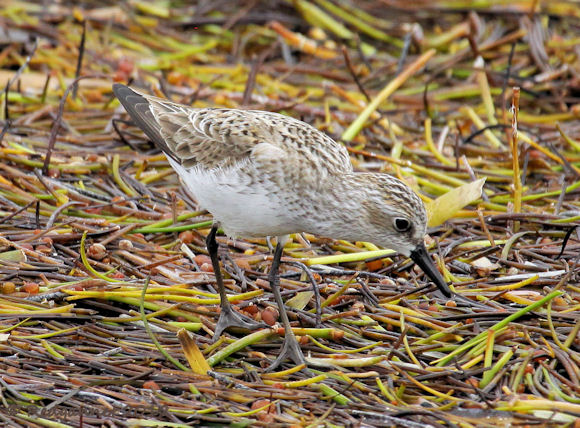 Also seen, but away from Matheson Hammock

Common Gallinule 1, Eastern Kingbird 1, Least Tern 1,
The Common Gallinule is marked in red as this is the first I have seen since I realised that it had been split from the Common Moorhen.

Visit the dedicated USA page for other posts from the area
Posted by Redgannet at 14:42