It may not be fashionable to credit animals with so called “higher” emotions, but there is a lot of evidence that has prompted even cynics to consider the possibility.

During a recent trip to Pilanesberg NP in South Africa, I witnessed a poignant scene that leads me to anthropomorphosize along with the best of them.
Do elephants grieve or mourn their dead?

My colleague, H, saw 2 bull elephants in the distance. They were striding along with some purpose and my hunch was that they were headed for Maletse Dam on Dithabaneng. The larger of the two appeared to be in an agitated state. We had just left the dam where we had been watching some hippos sunbathing on the bank. From our position on the opposite bank we had also noticed the carcass of an elephant about 30 meters along the bank from the hippos. 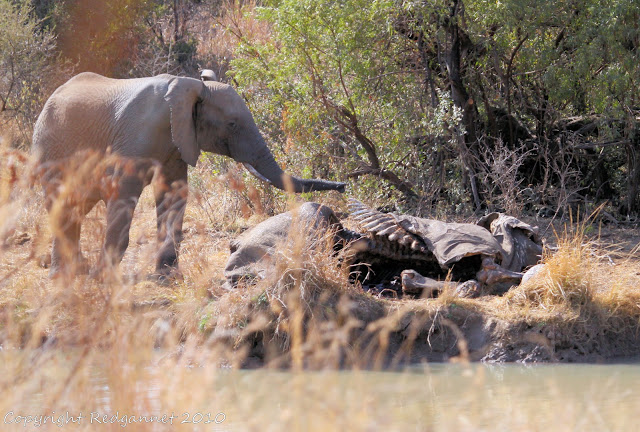 We returned to that spot and waited for the elephants to appear through the trees. The first one to arrive seemed unsure of what to do. He didn’t appear to want to approach the carcass. Instead he stood and swayed for a short while, swinging his back foot as if trying to pluck up courage. He moved close to the carcass and began touching it gently with his trunk. Then he began making frantic motions with his head and trunk that we could only interpret as, “Get up! Get up!” 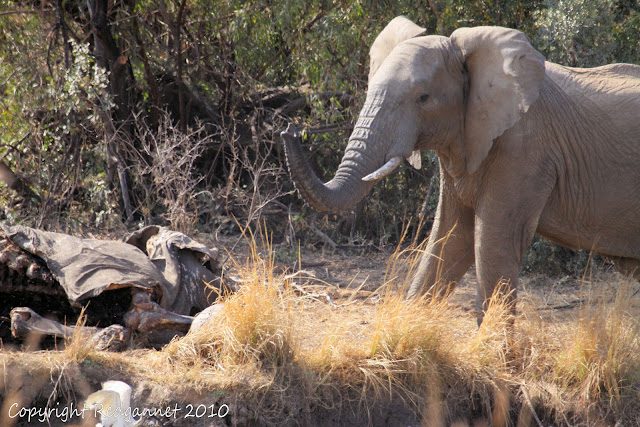 Supporters of grieving theories claim that elephants can recognise their dead relatives long after the carcasses have rotted away to just tusks and bones. They visit the remains and appear to mourn their loss even turning the bones over and sometimes carrying one away with them. Most remarked upon is the special interest given to the tusks of the dead animal.
The head and tusks of the remains in Pilanesberg were hidden behind some bankside vegetation, so we cannot say if the first bull was paying them particular attention, but he did spend some time brushing his trunk in the area where the head would have been and the presumption would be fair.
He seemed confused when he got no response and vented his aggression on a nearby African White Ibis. He flapped his ears and then filled his trunk with water and sprayed the bird. We put this down as a deliberate action as he did it 4 times and appeared to take aim on each occasion. 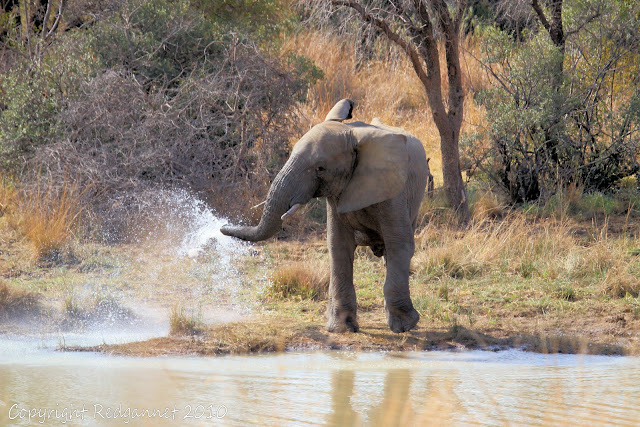 He now turned his anger on the hippos who were still sunbathing along the bank. They tried to stare him down for a few moments before taking the wise option and retreating into the water. 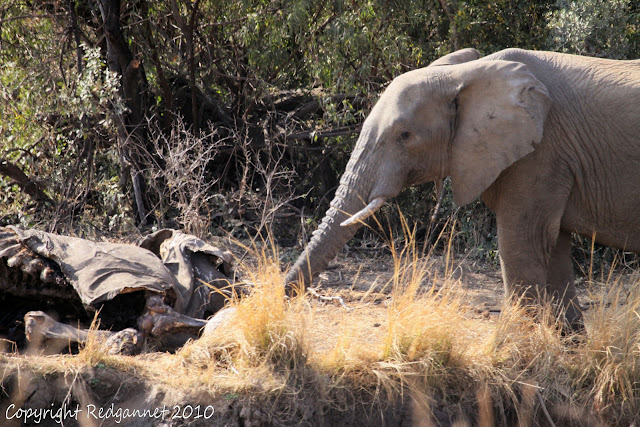 Now the second elephant arrived. He too seemed unsure of what to do. After a while he moved up the bank away from his companion and the body as if not wanting to acknowledge the situation. 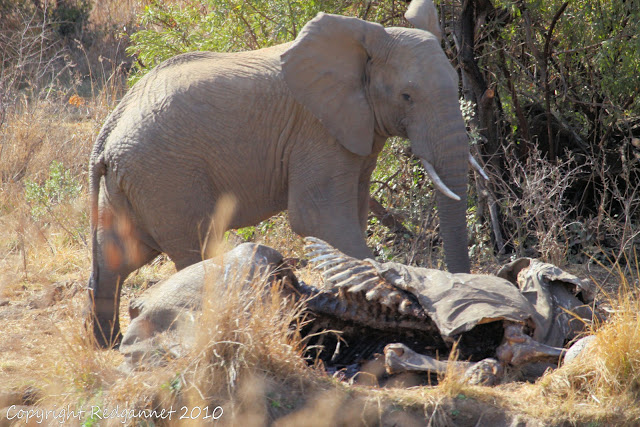 He returned a little later and approached the carcass stopping respectfully before reaching out his trunk to touch it. He moved around to the head end, gently touching as he passed and inclining his head towards the body. After a few moments, he moved away and stood quietly. 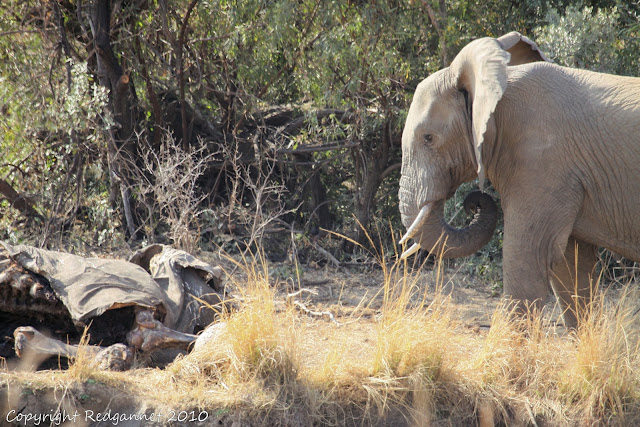 The first bull became upset with the ibis which had landed on the carcass and he tried to swat it away with his trunk.
A few more spectators had begun to arrive and we decided to leave before a scrum developed. As we pulled along the road, we found a lion which walked out onto the road and began moving back the way we had come. We hoped that he might go to the water to drink, but then realised that he was headed for the elephant carcass. There were about 12 vehicles jockeying for position to see the elephants, but a couple pulled away as we arrived back and our original position became vacant again as the lion arrived. 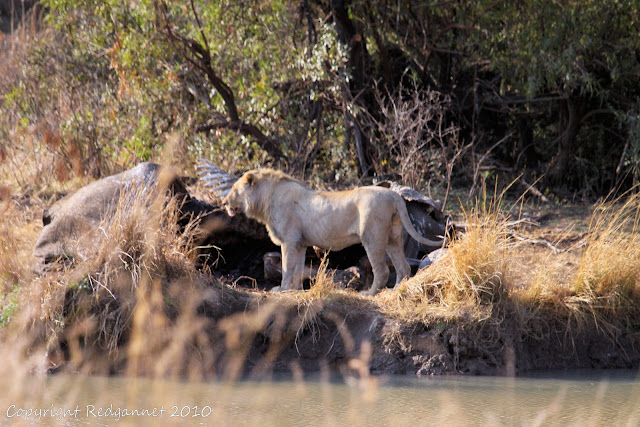 The larger elephant had moved on, but the first was still by the body. He did not want to see the lions feeding on his fallen comrade and tried to make a stand but was forced to retreat when he realised that he was alone and a second lion appeared.

Neither of them drank during the time that we watched (and we returned after an absence of only a few minutes) which provokes a question about the reason for their purposeful walk to the dam. Did they come specially to pay their respects to a dead relative, or were they thirsty, but became overwhelmed with existential angst after their grisly discovery and forgot that thirst?
I do not know how the elephant died. Possibilities include poachers, old age or predation, though it looked like a big carcass. If it died recently, perhaps this was the first time that the bulls had encountered it. As I look back on the incident now, I recall the bulls, still very distant from the dam, raising their trunks to test the air. The wind was blowing in their direction and it was clear even to my atrophied sense of smell that something was dead. Is it possible that elephants can distinguish between the smell of a dead relative and a rotting hippo for example? H and I theorised that they would have been able to smell the dead elephant from a long way off and had made a special journey.

Whatever the truth may be, it certainly provided a touching moment and confirmed in my mind that we humans are very arrogant in reserving “higher” emotions for themselves.

I have found 2 mentions of the carcass with pictures showing that it is the same elephant. The earlier one indicates that the elephant died before 29th June. We saw it on 24th August and the lions were still feeding from it.

For the full post on the visit to Pilanesberg, click on the link below;
http://redgannet.blogspot.co.uk/2010/09/pilanesberg-johannesberg-jnb-south.html
Posted by Redgannet at 10:30