The “gardens” at the Sheraton Hotel in Lagos consist of a few ornamental shrubs, some lawn and a small sewage facility. A jogging track tours this Eden in under 300m. Much of the ground area is taken up with 2 tennis courts.
Nonetheless, this weary, beery birder managed to find a few local favourites to keep him entertained. The first birds of the morning were a small flock above the machine sheds adjacent to the gardens. I have mentioned in the past that trying to take pictures of swifts is a thankless task, but I seldom listen to myself or take my own advice. On this occasion, I was pleased to capture the spines on the tail of this Mottled Spine-tail. 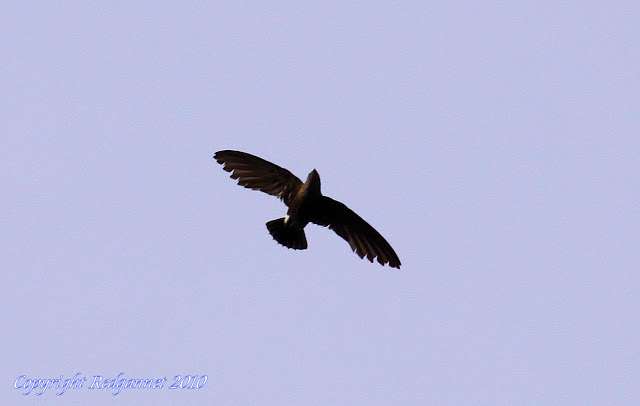 I had attracted the attention of a guard and soon enough the Security Manager turned up and needed to be reassured that I was not using a video camera. A pair of Bar-breasted Firefinches hopped between a bush and the fence of the tennis court, but on-going discussions with the Security Manager prevented me getting a picture. 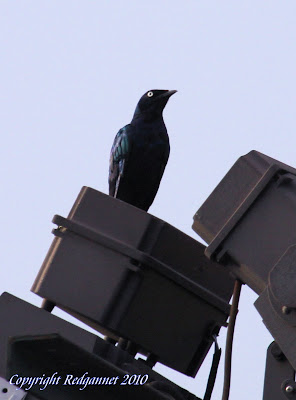 A Splendid Glossy starling was perched on the tennis court lights.
Beyond the razor-wired wall of the gardens is a tantalizing expanse of coarse grasses with a wooded gulley beyond. 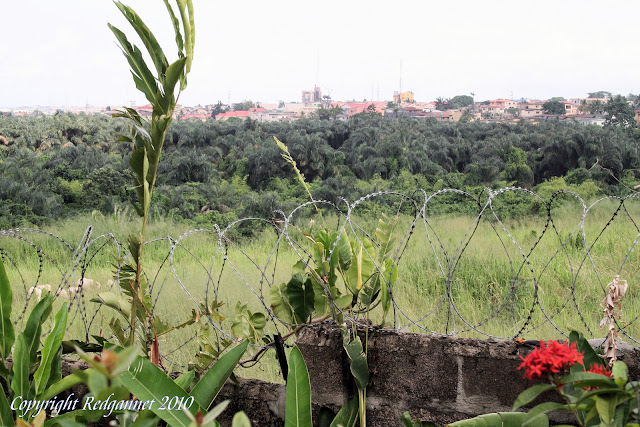 This area is sadly out of bounds, but from where I was, I could still see a Senegal Coucal perched up on a small bush while a Tawny-flanked Prinia called just to his left. 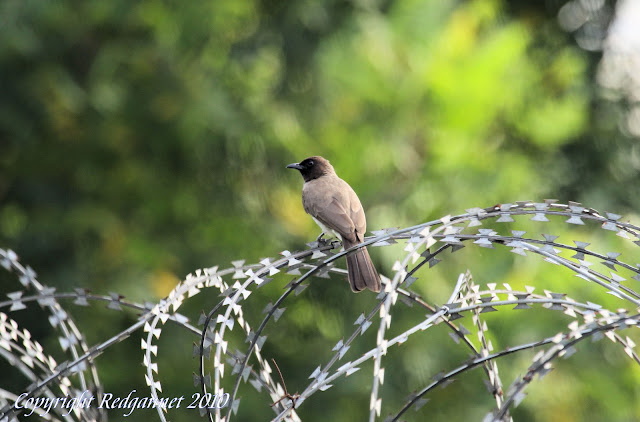 Common Bulbuls used the razor wire as a vantage point from which to pounce on insects in the grass. 2 birds raced down to grab this dragonfly and squabble over it. 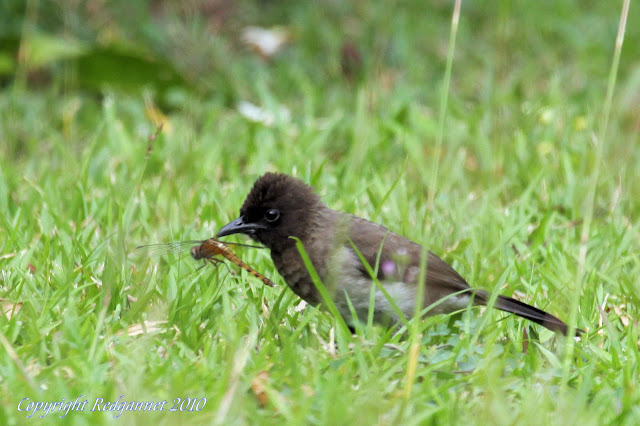 The effluent tanks used to be screened by some large casuarina trees, but these have been cut down and are being replaced by a sterile fence. A couple of the trees that did not form part of the screen are still there and were holding a Splendid Glossy Starling and a Western Grey Plantain-eater. 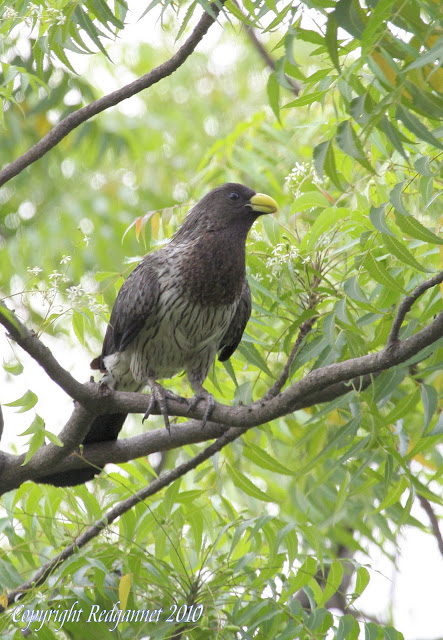 Bronze Munias were collecting nesting material and seemed to be building a number of nests in the same thickly leaved tree. Are Bronze Munias communal nesters? Anyone? 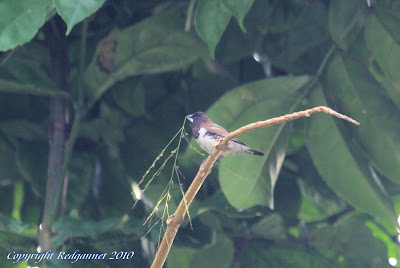 For the second time I was challenged about my camera and told that I would need to get permission from the Public Relations Manager before I could use it, So I packed up for the day not wishing to be hot, hung-over and interfered with anymore.
I was feeling better later on, so I tried to get permission to go for another walk in the gardens. The Duty Manager decided that I should be accompanied by the Security Manager. He got bored very quickly and passed me on to Edim, a security guard, who diligently followed me round the gardens to ensure that I only took pictures of birds. He was very good, seeming to take an interest while being quiet and unobtrusive. 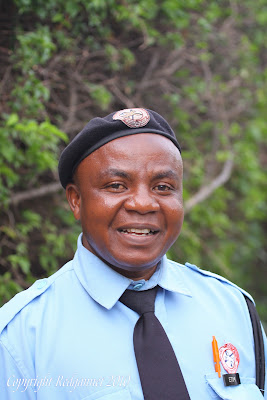 I had hoped to get the picture of the Bar-breasted Firefinch that I missed this morning, but could not find them again. One nice find though was a pair of Broad-billed Rollers hawking from a lamppost on the road beyond the wall. They were horribly silhouetted and I took a while to make sure that they were not the Blue-throated Roller. 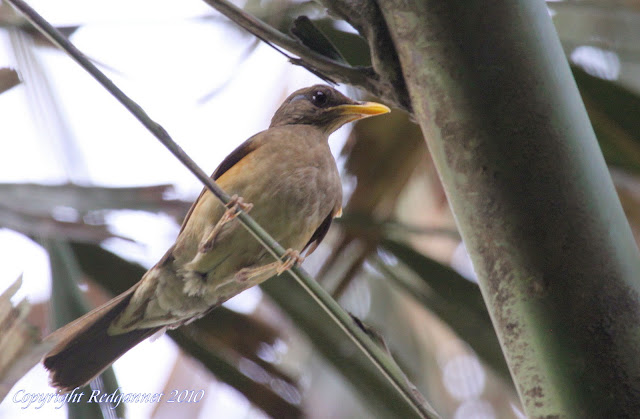 An African Thrush sat high in a palm.
A very obvious feature of the gardens are the lizards. I believe the big ones with the orange heads are Agama lizards. 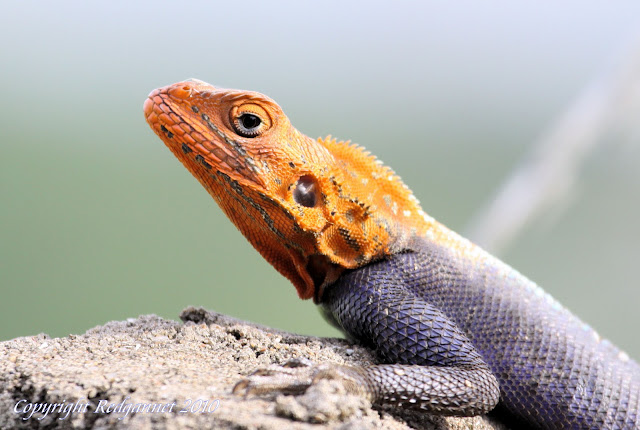 As for the others, I am sorry, I don’t know. 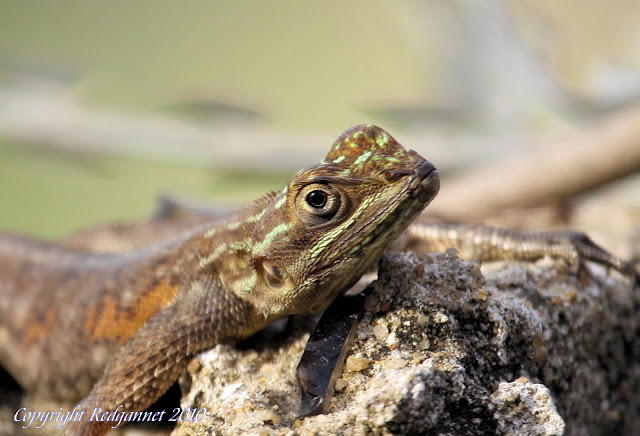