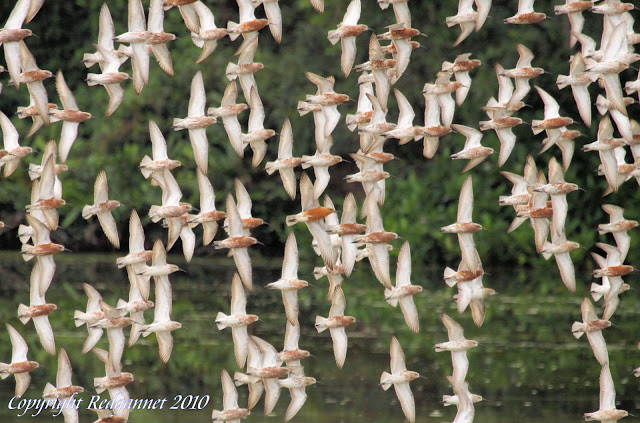 Migration should be in full flight and I had my special permit confirmed. It was all set fair for a great day.
I chose to walk the approach road as I could not access my permit until the office opened at 09.00¸ but there was plenty here to keep me busy. My first steps were accompanied by the frantic calls of the Asian Koel. More melodic, was the Oriental Magpie Robin. 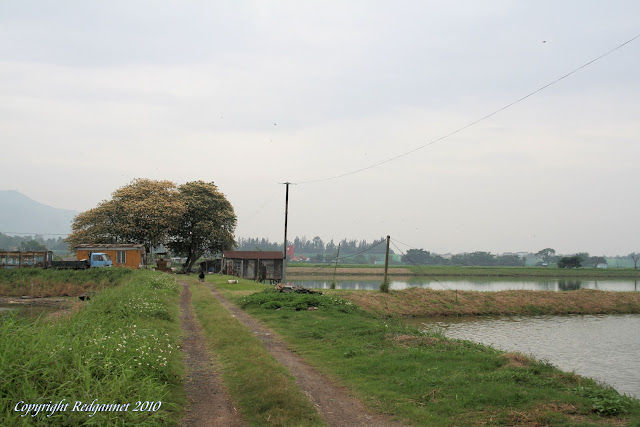 The road is lined with fish ponds, the first of which had been drained. It was edged with Wood Sandpipers and another wader which I tentatively identified as Sharp-tailed Sandpiper. The air above was filled with Barn Swallows and the telephone lines were festooned with Whiskered Terns. The tall grasses and reeds along the edge were filled with Yellow-bellied and Plain Prinias singing and clicking. 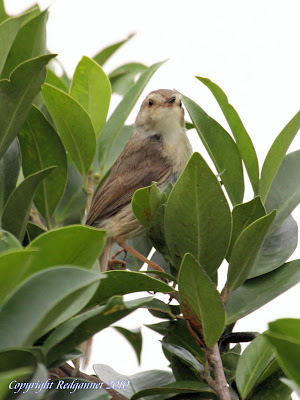 At a bend in the road are some small houses. Here were Azure-winged Magpies, Chinese Bulbuls and a Great Coucal. I arrived at the office just as it opened, obtained my pre-booked permit and set off into Mai Po proper.
Just before the entrance, a small flock of Scaly Munia were feeding on seed heads. 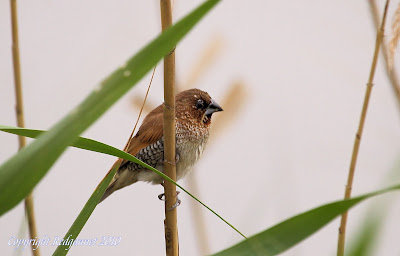 The Tower Hide at gei wei (managed pond) 8 was surprisingly deserted. I would have thought that the reserve would have been busy, but today was Wednesday. I guess the Hong Kong birders were saving their exertions for the weekend. The visitors who had made the effort today were shunning this hide because it looked out onto a dried area devoid, it seemed, of birds. Those in the know were favouring Hide 8 at gei wei 11 and that is where I found them. A Grey-streaked Flycatcher watched me as I approached. 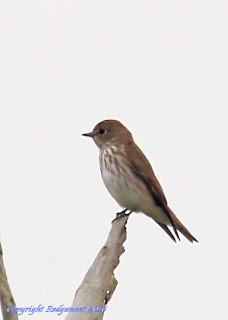 About 150m from the hide, a mixed flock was gathering to roost as the approaching tide pushed them off the mudflats. There were Greenshank, Bar-tailed Godwit, Spotted Redshank and about 2000 Curlew Sandpiper. As I scanned through the flock I was able to winkle out some Red Knot, Common Redshank and a few Marsh Sandpiper. 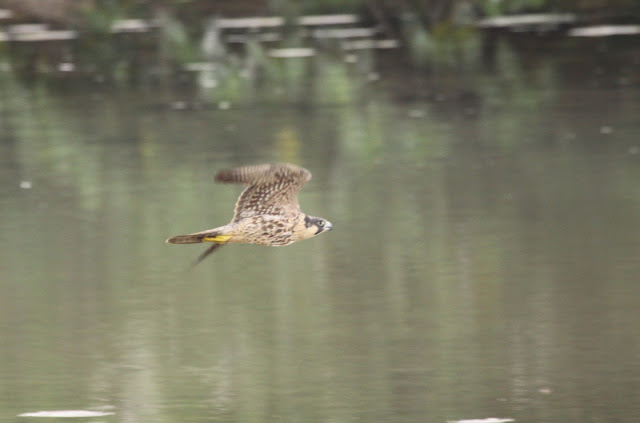 Suddenly, they all took flight as a Peregrine Falcon streaked in from the left. It missed on the first pass and banked up over the trees on the far side of the gei wei. It flew back behind the trees out of sight of the panicked flock and then came through for a second run. It made three passes without success before stopping for a rest on a tree over-looking the roost site. The birds were obviously reluctant to settle under the gaze of the falcon and milled around for a while before deciding to roost elsewhere. 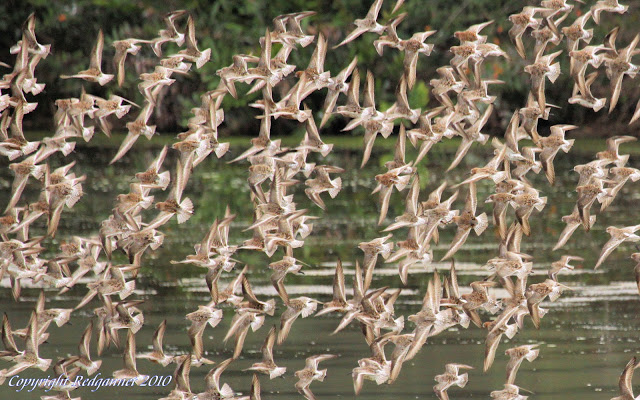 Even the egrets which would probably be a little large for a Peregrine to attack gathered together for comfort.
As the tide pushed more and more birds off the huge mudflats of Deep Bay, new arrivals began to settle, unaware of the falcon’s presence until it launched a second attempt to secure brunch. It stopped again for a rest in the same tree while the roost filled up again with unsuspecting newcomers before making a third try.
This time a Greenshank ducked under the water instead of taking to the air with the rest of the flock. Alone in the water, it was a sitting target. The falcon banked and homed in. 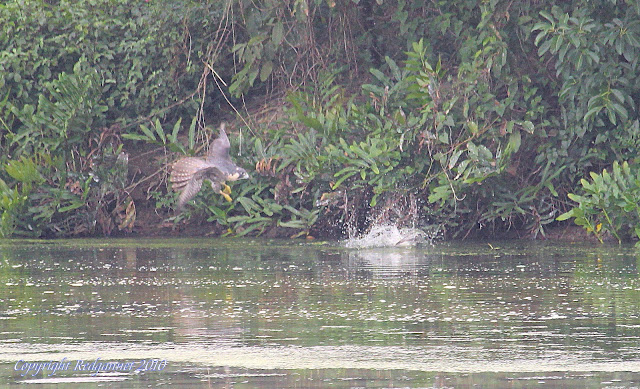 The Greenshank fled for the shelter of some overhanging branches by the bank and barely made it as the Peregrine extended it’s talons to made the catch. The falcon tried again and again to flush it out from the cover, but each time, it’s quarry ducked beneath the water to evade capture. 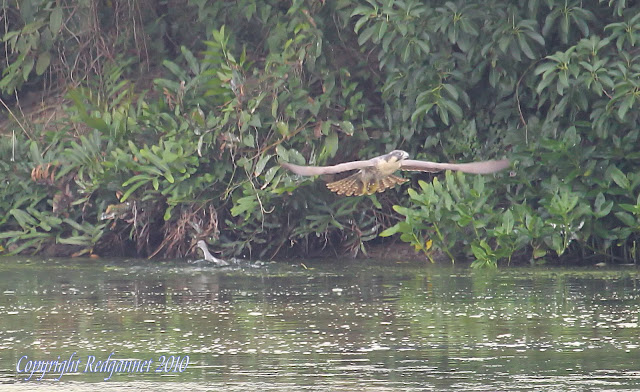 Eventually, the Peregrine became tired and gave up. It retired to it’s tree leaving the Greenshank cowering in the bank side cover.
I moved on to the popular gei wei 16/17, where I was entranced by the sight of about 2000 tightly packed Avocet. Dotted amongst them were a few Asiatic Dowitchers in their breeding colours.

On an island, Black-necked Stilts looked to be starting their nesting activities and a sandbar held Gull-billed and Caspian Terns and a single Saunder’s Gull.
From a tussock of grass appeared an old friend. On my last visit to Mai Po, I considered myself very lucky to get a fleeting glimpse of a Painted Snipe. This time, from the very same bench, I was blessed with a much better view and even managed a photo. The dowdy plumaged male looked to be collecting nesting material amongst the grass. 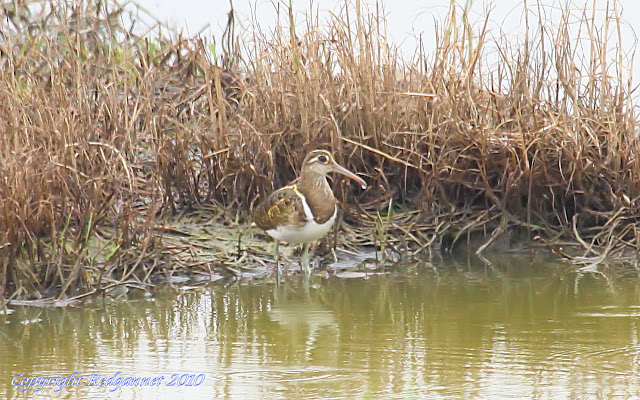 By now the tide had reached high, slack tide and would soon be receding to reveal the refreshed mudflats of Deep Bay. A boardwalk passes for over a kilometre out through the mangroves to a couple of hides overlooking the exposed flats. 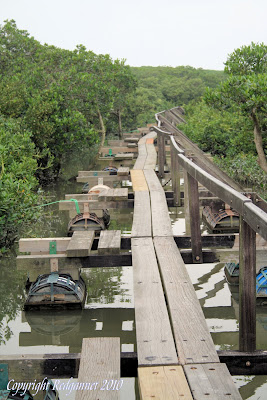 As I reached the new hide there were still a couple of inches of water left in the mangroves. The hide was busy and there were thousands of waders and gulls over by the old hide. I began to wonder if I had chosen wisely.
From where I was, I could see 2 Osprey perched on strategically placed posts. A small tract of land just to the side of the hide was already above water and held a few Temminck’s Stint, Yellow and Grey Wagtails Common Sandpiper and a couple of Far Eastern Curlew. 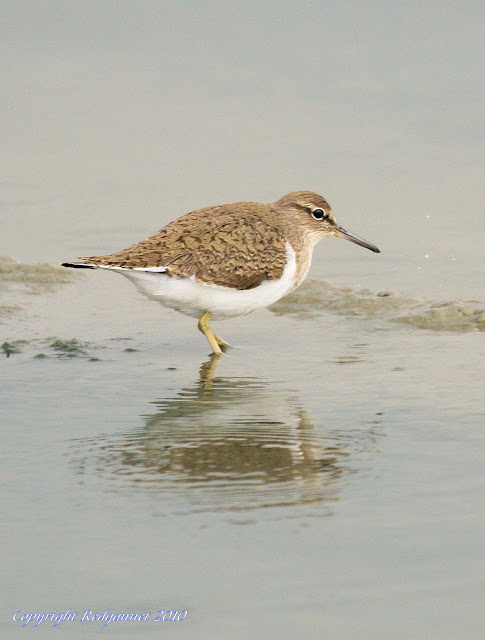 The water was receding from around the hide now, beginning to reveal the mud. Then, as one, the distant birds rose as if a cloud and headed straight for us. The excitement among the birders in the hide grew as the birds approached and began to settle around us. 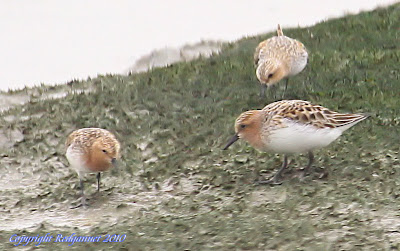 Curlew Sandpiper and Red-necked Stint by the thousand made up the bulk of the biomass. Other abundant species included Pacific Golden Plover, Spotted and Common Redshank. 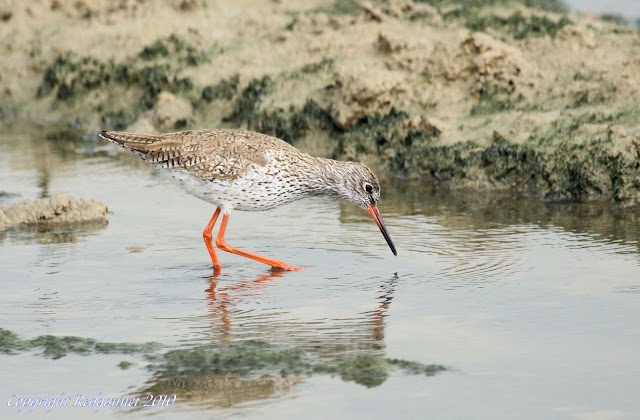 As the birders started picking through the seething mass, they began calling out what they were seeing. I caused a moment of excitement when I called a Spoon-billed Sandpiper, only for it to turn out to be a stint with a piece of mud stuck to it’s bill in a jaunty, spatulate-like manner.
Prominent among the spotters was a chap called Phil who patiently scanned with his scope calling, Broad-billed Sandpiper, Red-necked Phalarope and Kentish Plover that I might otherwise have missed. Other waders (in a tally of 31) included Terek Sandpiper, Ruddy Turnstone, Whimbrel, Grey Plover, Long-toed Stint, the list seemed to go on and on. 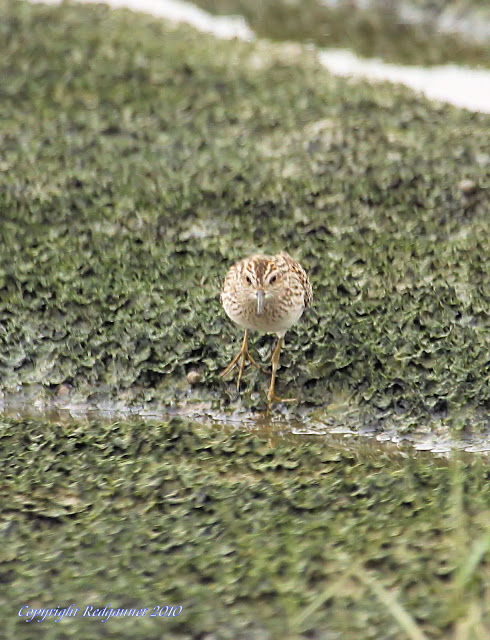 A sharp shower of rain drenched the left side of the hide and soaked my field-guide. 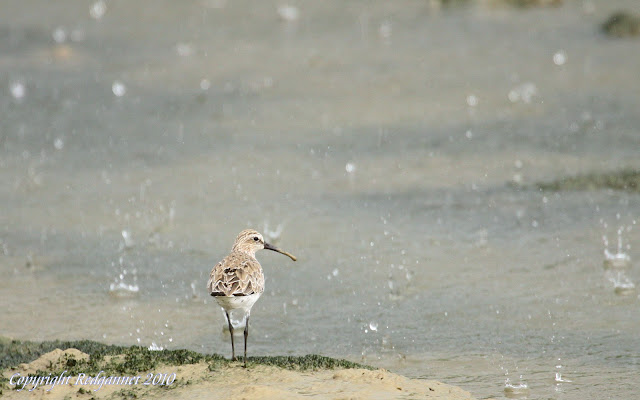 Although the book has stood me in good stead for 14 years and has even been used to ward off feral dogs, it’s inadequacies were brought home to me today with the vast amounts of birds at different stages of plumage . I now have a good excuse to update it. 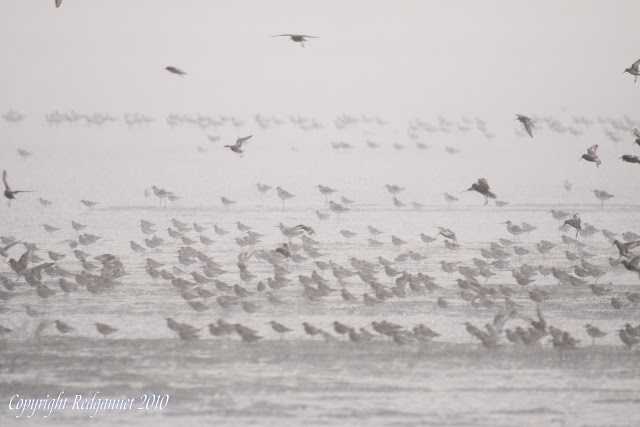 The birds all turned to face the weather head-on as we battened down the hatches and retreated to the lee-side of the hide. By the time the rain was over, the water had ebbed far out into the bay. 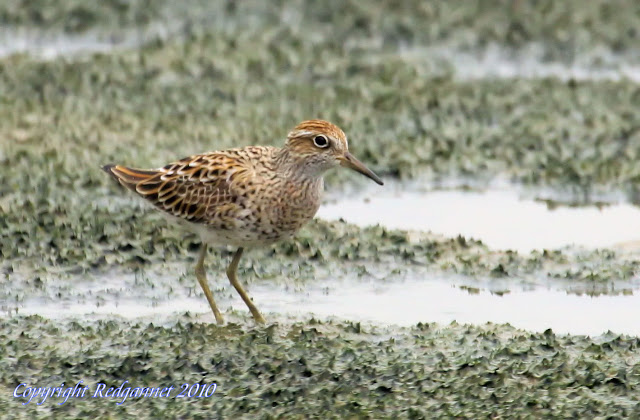 A small flock of Sharp-tailed Sandpipers stayed within range to have their photos taken.
Other birders began to leave until just Phil and I were left. A grey-tailed Tattler had us holding our breath until we decided that it was not the first ever Hong Kong record of a Wandering Tattler. 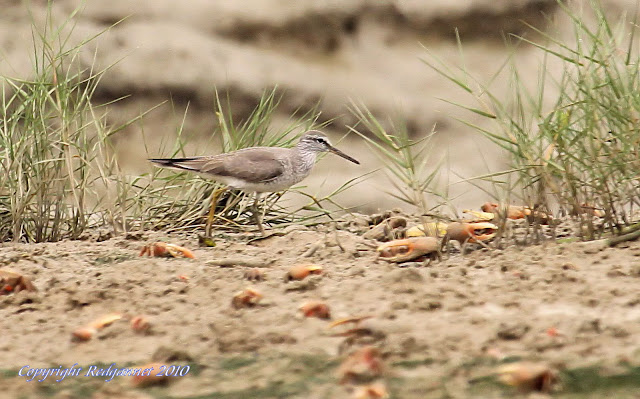 As I left, Phil was still patiently scanning for a Spoon-billed Sandpiper. I returned along the boardwalk, serenaded by the strident songs of the very common Yellow-bellied Prinia and made my way back to gei wei 16/17. Phil joined me there later, hoping to get a look at the Painted Snipe. He called my attention to something in the water out to our right. The Black-winged Stilts had seen it too and were not happy about it. We realised that it was a big snake, certainly 2, maybe as much as 3 meters long and as thick as my wrist.

The Stilts escorted it across the water flapping and fussing all the way. We speculated that the snake was interested in the stilts’ nesting progress and may have been checking to see if there were any eggs yet. This all happened a long way off and it was difficult to see what happened once the snake got on to the island. Eventually however, it returned whence it came across the water. Reinforcements in the shape of a dozen Black-faced Spoonbills arrived to watch it leave, perhaps too late to save a stilt egg.