A flash caught the attention of a Forster’s Tern as it hunted over the northern lagoon at Bolsa Chica. The tern banked and dived. It hit the water with barely a splash and came up with a little fish. 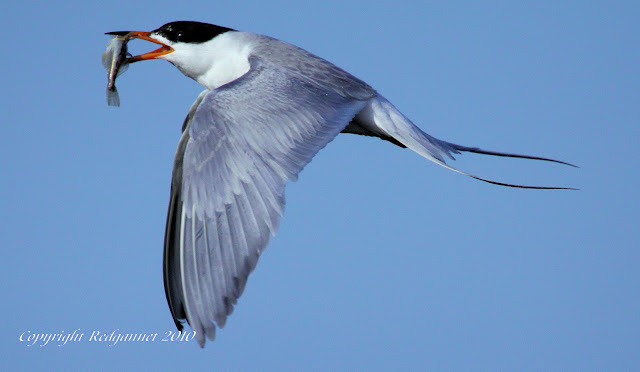 So started my day and so it continued. I have never shown a particular leaning towards terns before, in fact I sometimes find them rather tricky, but today I developed an unexplainable fascination for the family.
It was early morning, the sun was just up and I was on a raised bank about 5meters above the level of the incoming tide. 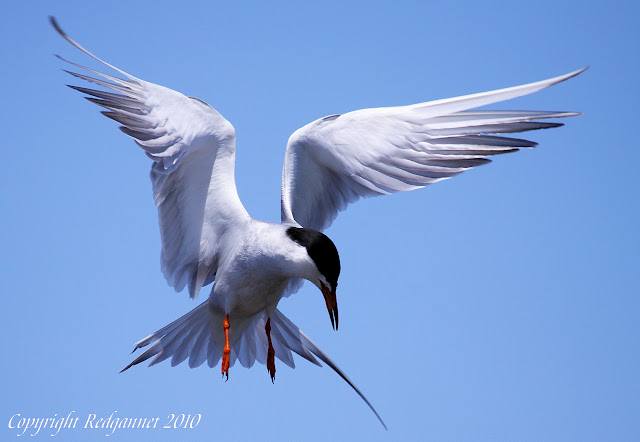 Forster’s Terns were searching for food, occasionally hovering at about 8 meters before plunging towards the water, putting me in a good position for photographs. I set my camera to maximum FPS and AI Servo Focus to keep up with the action.

Smaller birds were the Least Terns, They seemed to prefer hovering higher than the Forster’s and would make step descents before taking the final plunge. 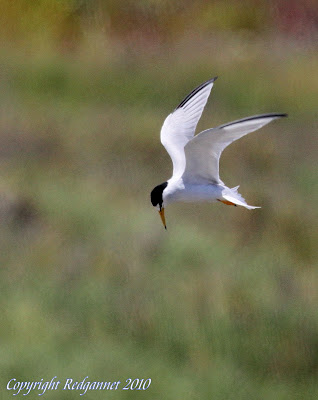 Big gull-like terns were Caspian, but I had to check them carefully as there was the possibility of the similar Royal Terns in the area. 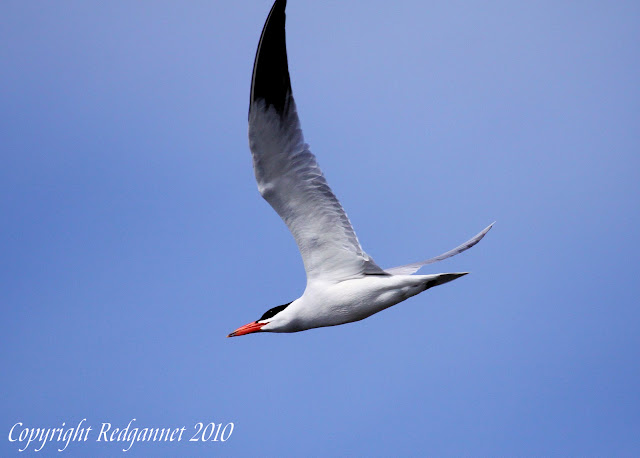 A flock of Black Skimmers swooped up and over the road bridge on Warner, back down to the water’s surface and they were gone. They were too quick for me. Now I know that if I venture to suggest that skimmers are terns, some of my more vigilant readers may scoff. They are related in the Charadriiformes order, but then so are curlews, stints, gulls and guillemots. While the Terns are members of the Sternidae family, the skimmers are related within the Rhychopidae. Taxanomically, they are next door neighbours as well as first cousins. Morphologically, they share more similarities than differences. So for today, they will be terns. 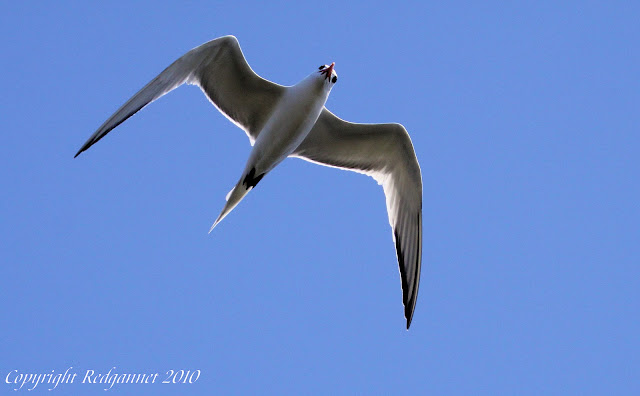 The fifth species was Elegant Tern, but again close inspection was required.  Many of the birds heading to roost were flying singly, while later in the day, the birds heading out to feed seemed to be doing so as couples. 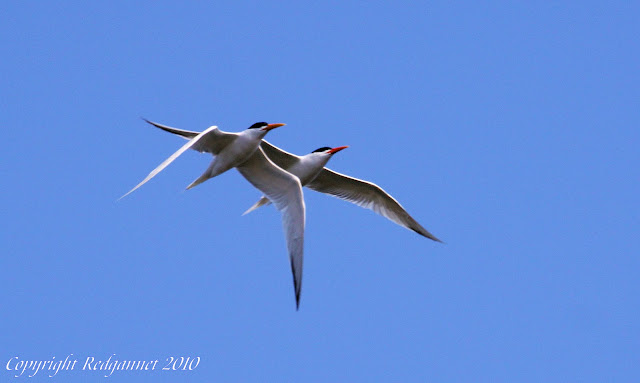 There is an area close to the boardwalk where the gulls and terns like to roost, so I would head there later to examine them on the ground, but for now, I was enjoying the Forster’s Terns. As well as fishing, they were pair-bonding. They flew high, the male (I’m assuming) above with his wings held at an acute dihedral angle; the female (by process of assumptive elimination) banked gently from side to side beneath him. On the ground, they offered one another small gifts of fish and kept up a constant chattering.
As the water level rises in the northern lagoon, it is forced through a pipe, under the dividing road and into the next lagoon. More Forster’s Terns were fishing the tide here as it channelled through the pipe. 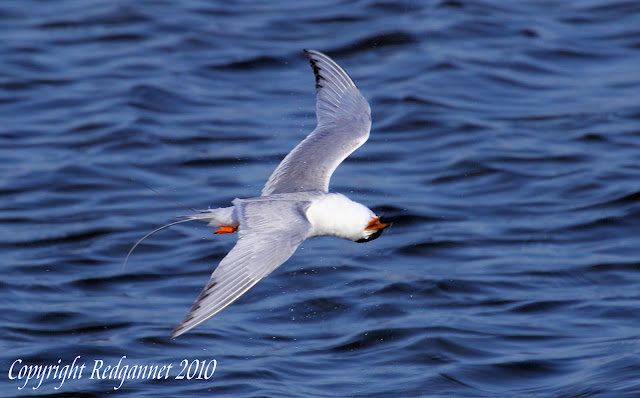 As they rose up out of the water after diving for a fish, they would shake themselves, much as a dog might, to get the excess water off. 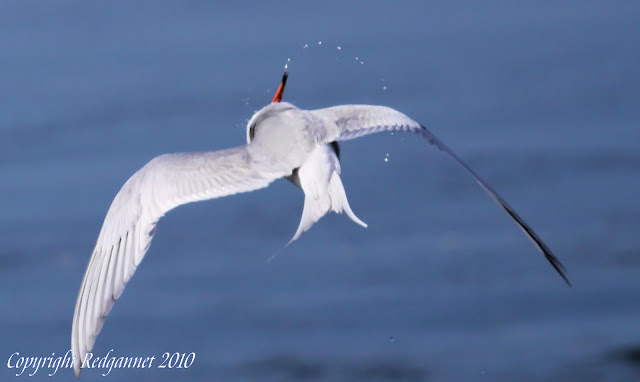 On a hill over looking the lagoons, a small wooded area holds a few Great Blue Heron nests. Earlier in the morning, the herons had been hunting in the wildflower meadows close by until the Red-shouldered Blackbirds chased them off. Now, in the freshwater lake, they were looking to feed their chicks by the more accepted method associated with herons. 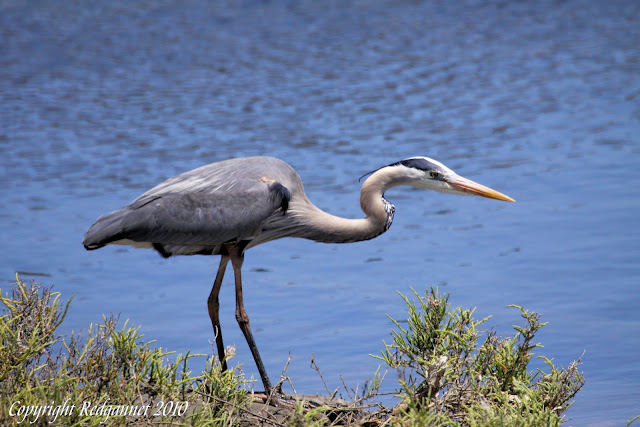 Low bank-side weeds provided a stage for the local speciality of Savannah Sparrow. This is Belding’s Sparrow. 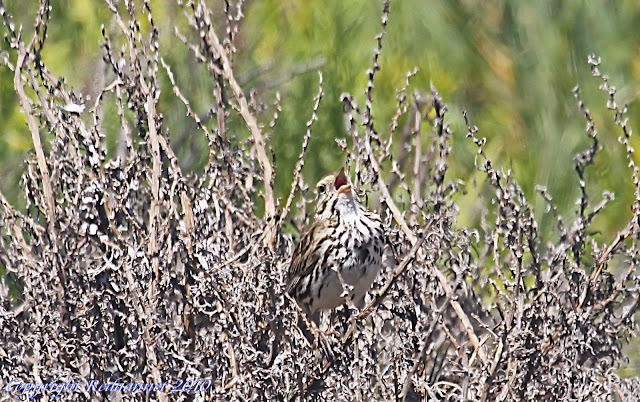 After a brief sidetrack, I was back to the terns. An area by the boardwalk has been fenced off and allows the terns to nest in peace and quiet (if such a thing is ever likely at a tern colony). While the Forster’s Terns were still the prevalent species, Least Terns were increasing in number here. A small flock of Elegant Terns were roosting on an island in the back lagoon. 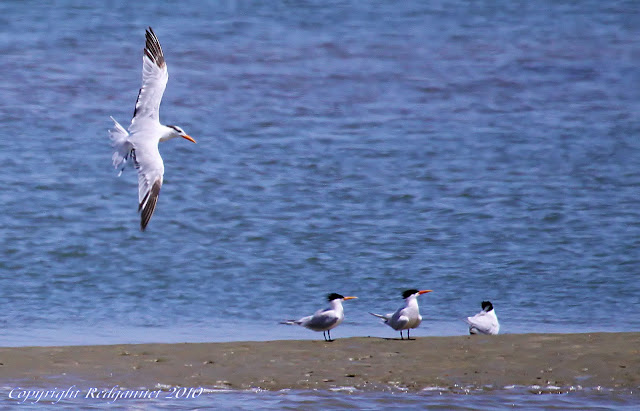 Despite seeing many flying over, the larger terns were not well represented on the roosts. Only when I looked South from the boardwalk did I see an island with a large flock of Black Skimmers and the bigger sternidae.
I would really love to get a picture of a skimmer skimming and an idea struck me. When they came out on to the water to feed, they would probably fly straight up this stretch of water towards me, offering the perfect opportunity to photograph them. So I settled in to wait.

Just in case you are unfamiliar with skimmers, they are famed and named for their manner of feeding. 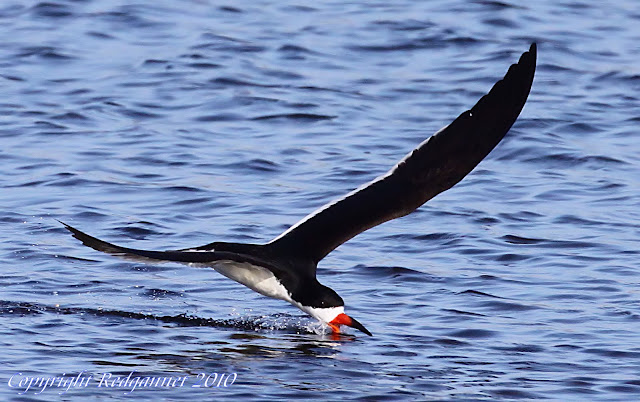 They fly along just above the surface of the water with their bill open and the bottom mandible lowered into the water. 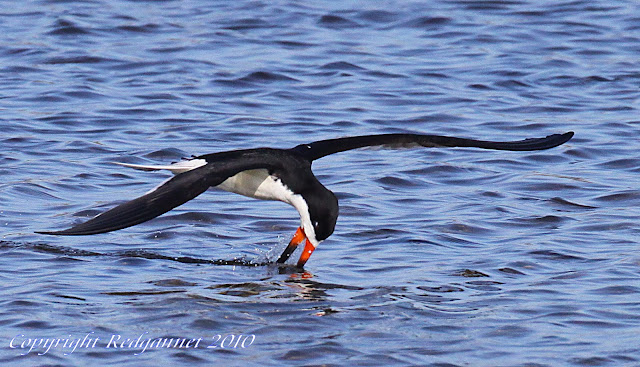 If the skimming bird crosses the path of a fish, the head flexes down as the bill snaps shut. It seems a bit hit and miss, but it seems to work. If you look closely, you might just see the little morsel the bird in the picture below has caught. 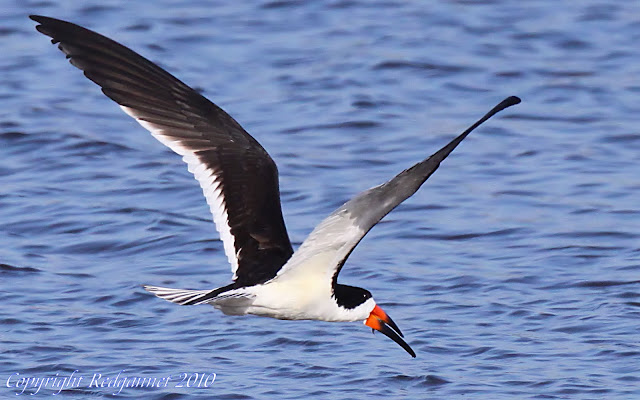 Many times the flock took flight as if spooked by a Peregrine Falcon, but they soon settled again, too far away for a photograph. Then a wonderful thing happened. Another photographer arrived and struck up a conversation about my lens. We discussed stuff for a while before he unexpectedly asked if I would like a go of his lens. It was a Canon 500mm F4, why did he feel the need to ask, I wonder? He set it up on a sturdy tripod with a gymbal head mount and left me to it. 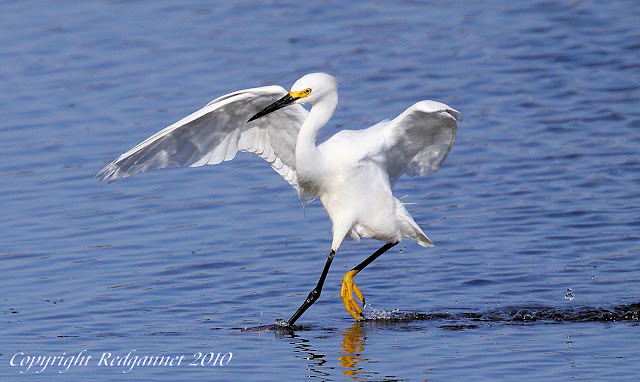 I felt like a Cypriot with a scattergun, shooting everything I could see and soon filled up an 8GB card. 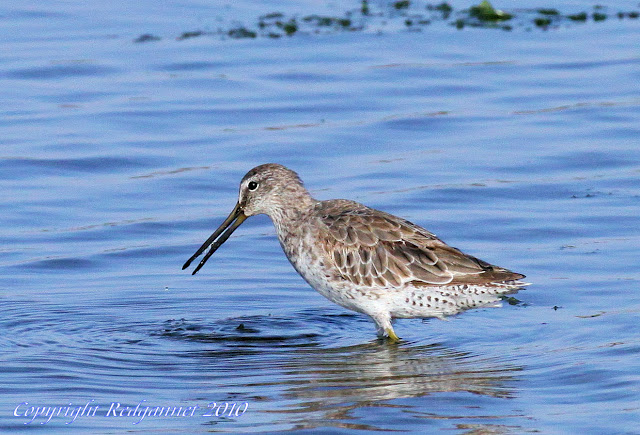 The 4 Black Skimmers above as well as the Snowy Egret, Short-billed Dowitcher and the Marbled Godwit in flight were all taken with the big lens. 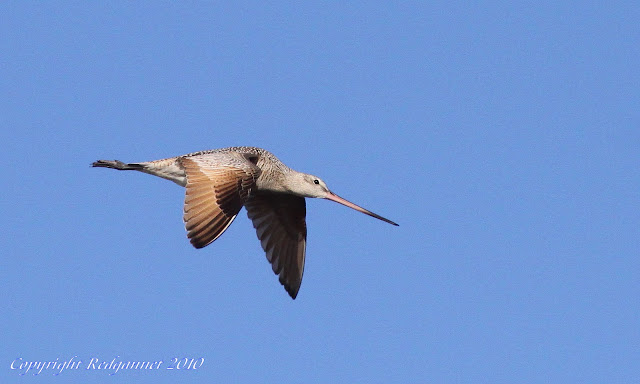 It was certainly a hit with the ladies too, drawing admiring glances and saucy remarks from passers-by. If you have not seen a Canon 500mm F4, picture a bucket on the front of a camera and you won't be far off. 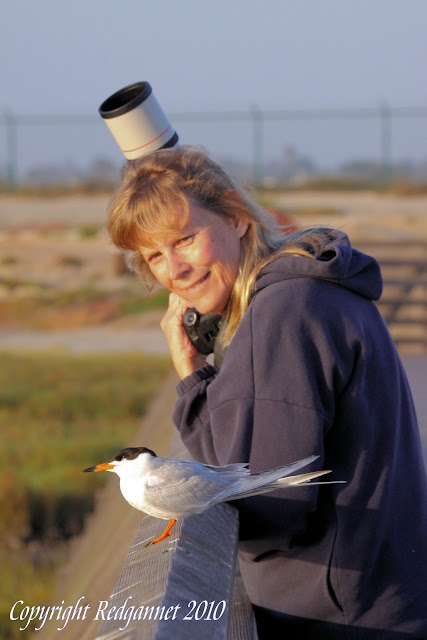 Other photographers started to arrive as afternoon turned to evening. They told me that skimmers are nocturnal feeders and do not usually make their move until the evening is well advanced. I hadn’t known this, but it fitted in with what I had seen today. At around 18.00, they began to come out onto the water, just one or two to start with, but as the evening drew on, small parties began to feed. I was surprised by their size, speed and manoevreability. It was hard to keep the camera on them. 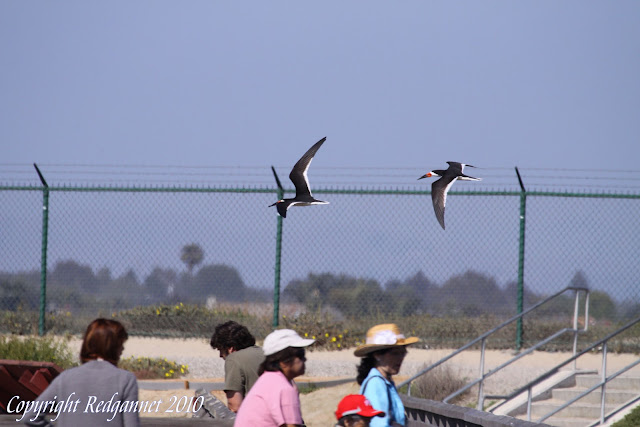 The boardwalk interrupts their skim path so they suddenly have to pull up and gain altitude to carry them over the rails. When a large bird such as this with such an impressive beak is hurtling towards you at great speed, it is hard not to duck.
As predicted it was only once the light was leaving the sky that they came out in force. Close to the water while feeding, they move in a perfect synchronous formation. In the sky, they are awkward and haphazard. 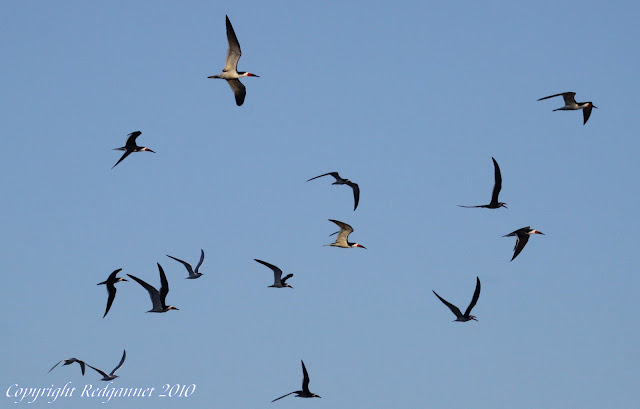 I had the opportunity to compare the results of both lenses and I must say that the 500mm F4 is a great lens, but….. it does not come with the vital accessory to compliment it, a porter. The size and weight of the lens itself plus the sturdier tripod and gymbal mount would make it impractical as a travelling lens. The 100-400 is much more convenient, light and can be hand held. Therefore, despite Carl having to wrestle it from me, I will not be getting a 500mm F4. I shall stick to the smaller, more useful lens and resign myself to the ladies admiring Carl’s equipment instead of mine.
But just in case I start pining for the power and clarity of the 500mm F4 and begin to resent the limitations of my 100-400 F4.5-5.6, I have included a couple of comparison pictures to commend the smaller lens. 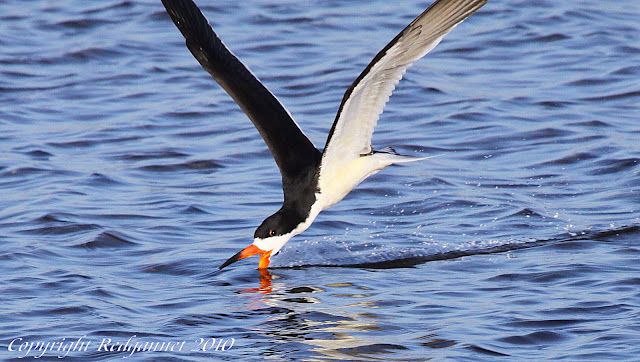 In fact, this may be my favourite one of the skimmers! 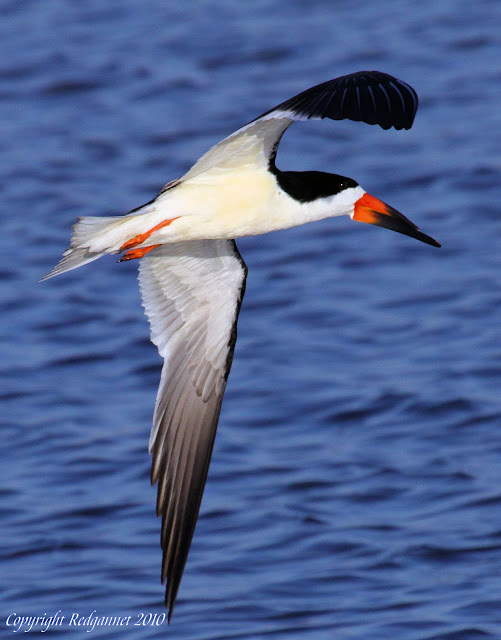 Of course terns were not the only birds at Bolsa Chica today. 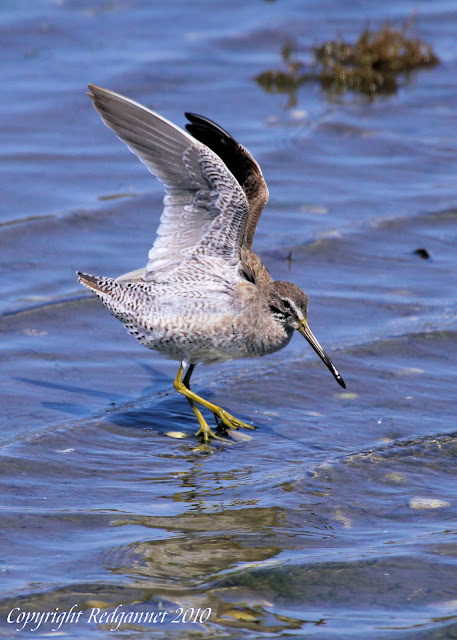 A few waders were still hanging around after the rest had headed north. Willet, Short-billed Dowitchers and Marbled Godwits were the most numerous. These pictures were also taken with the 100-400. 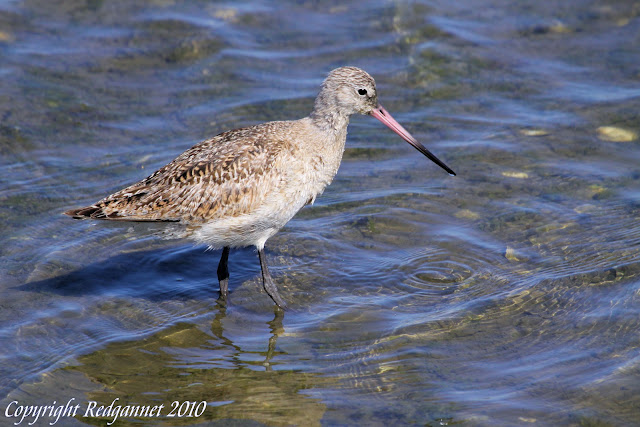