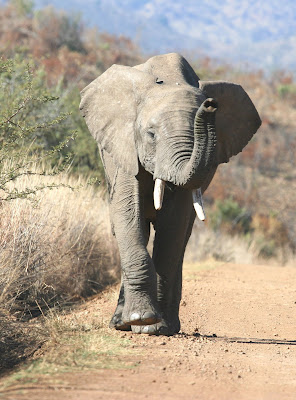 Before I was struck by the joy of birding, I was a mammaler. If you can be a birder or a mother (one who likes moths) then I am sure mammaler should be acceptable. Safari in Africa was my overriding passion and I indulged myself freely at every opportunity. With a job that took me around the world and which often sent me to Africa, I was living the dream.
Of course, when out in the wild looking for mammals, it was inevitable that I would run into a few birds, in fact I used to include Ostrich on my sightings list. Soon an interest developed and was encouraged by my friend Martin. I quickly realised that one can find birds pretty much anywhere and that I could go birding in every destination that my work took me.
But every so often, I slip back to my old ways and target a mammal as my objet de jour. Last year the winter timetables changed for Vancouver flights. This gave me more time in Vancouver, more importantly, it allowed me to find something that I had wanted to see for a very long time.
I first met Nemo the killer whale in a drunken dare, many, many years ago, whilst at college in Clacton-on Sea, Essex. He fascinated me so much that I got a part-time job mucking him out and maintaining his tiny pool on the pier. The pool which had been deemed adequate when he had arrived 6 years previously was now hopelessly small and plans were afoot to move him to Windsor Safari Park. Here he had been promised a larger pool and company in the form of a female called Winnie.
Sadly Nemo was never able to settle well at Windsor. All those years isolated from others of his kind and kept in cramped conditions had left him with emotional issues which he was unable to resolve. He did not mix well with the other animals at Windsor and had to be kept in a side pool which was even smaller than the one in Clacton. He died in the side pool 2 years after his transfer and Windsor Safari Park is now the celebrated and more eco-intelligent Legoland.
Having been associated so closely with Nemo (let’s not get carried away here, I used to clean out his pool)I developed a deep affection for Orcas as they should correctly be called and dreamed of seeing one in the ocean where it is supposed to be. Little did I know then that I would end up working for an international airline and might actually get the chance one day. Sadly the whale-watching cruises from Seattle and Vancouver cold not guarantee to get back to land in order for me to be on the plane in time for work. Instead, I often used to take a ferry across to Vancouver Island and then come straight back again in the hope of seeing Orcas on the crossings, but never had any success. For the birders amongst you, I did have some success on the ferries with Rhinoceros Auklets, Bald and Golden Eagles and the like.
Anyway, my big chance came when my airline decided to re-schedule the flight to leave later in the evening. This meant that I would be able to go whale-watching and be back in time for tea. So I did.
Whizzing along in an open-topped boat at the end of October is a chilling experience. Even with immersion/exposure suits we were cold and huddled into any shelter to stay out of the wind and the spray. But let’s get to the whales. 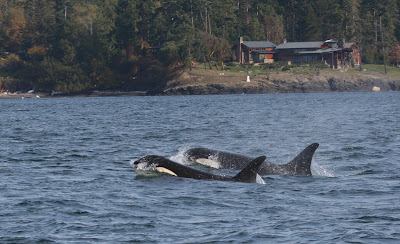 The whale-watching cruises have an extensive network of spotters on the water, in the air and on the shore who call in when whales are spotted. After one and a half hours of huddling, a call came through to say that Orcas had been spotted a long way South of our position. The good news was that they were travelling quite quickly in our direction. So we decided to enjoy an opportunity to take it slow and warm up in the weak sunshine in the lea of the islands to the east of Vancouver Island. Here we saw Bald Eagles and a small family of River Otters to coax our hands out of our pockets as we warmed gently. After a short while, the exposure suits started to peel back and everybody became more comfortable and chatty. 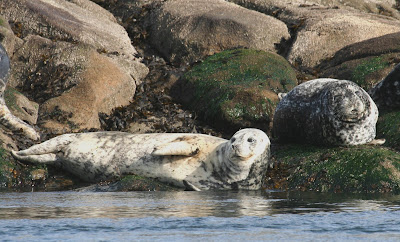 There is always a sense of anticipation on tours like this. Is it excitement at having the chance to experience something wonderful, or stress in case you don't? Knowing that the Orcas were on their way, we were able to relax. There were seals to be seen, Dall's Porpoise and the promise of Stellar's Sealion. 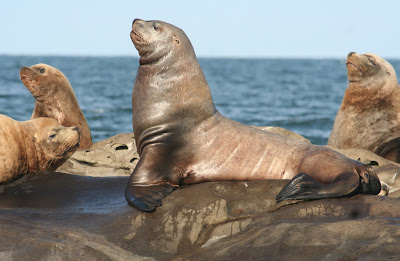 Soon enough, it was time to speed up again to intercept the Orcas and get a good view before they moved out into the larger channel. In case you are concerned, I have a big zoom on my camera and a cropping facility on my picture processor. I believe that the code of practice requires that boats remain at least 100m from the Orcas, but on this occasion a bigger distance was given as the whales were travelling along close to the shore. Our tour company was very aware that trapping the whales between the boats and the land would cause them stress and were keen to avoid this eventuality. One of the whales however seemed to have no concerns about our presence and passed so close to the boat that I could not get him all in. 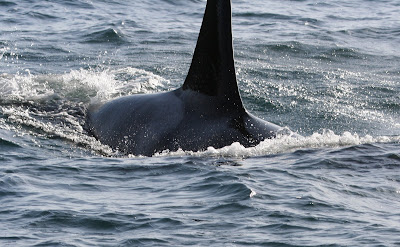 There were approximately 20 whales mostly from a well known group called Pod K. There were also a couple of males from Pod L, consorting with them. 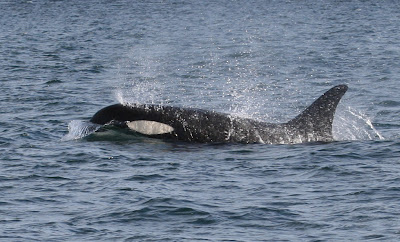 Around the Vancouver Island area, there are a number of pods of Orcas. They have been extensively studied and are well known to the tourist vessels and researchers. The resident animals, K and L pods, feed exlusively on fish, while the transients are mammal predators.

If you wish to know more, visit; http://www.whaleresearch.com/

For a tour from Vancouver; http://www.whalesvancouver.com/