In my profile, I glibly claim to be a family man who devotes his attention to his family. It is only fair after all that I should attempt to make up for being away so much. But on this occasion, I have not had a rostered trip for 2 weeks and my family were getting fed-up of me. My son is back to school after the Easter break and my wife needed to do some “girly shopping” so there was no reason to kick my heels at home.
It is late April and the weather is glorious. There was no wind this morning to disturb the phragmites reeds at Oare Marshes and I was hoping that the Bearded Reedlings would give me a better view than the usual obscured sightings through the stems. I confidently packed my camera for just such an opportunity.
Oare Marshes Reserve is run by Kent Wildlife Trust and features in http://www.kentos.org/
I was planning a stake-out on the eastern side of the reserve where a dyke runs along Faversham Creek and holds back the tide of the Thames Estuary. 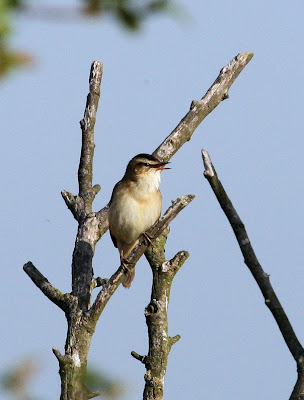 It took longer than anticipated to reach my ambush spot as the Sedge Warblers were showing so well and were begging to be seen and heard. They were sitting up high in the reeds and on scrub and brambles, singing their varied songs. 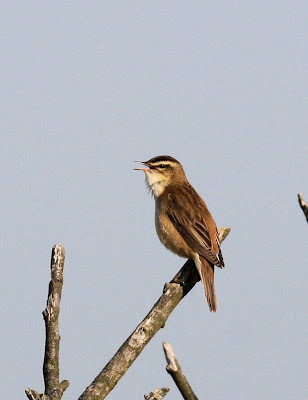 Their display flights sent them high into the air before gliding back down into the reeds. If the reedlings were as accomodating as this, I would be in for a good day I thought.
I could hear the reedlings further round and continued on beyond the spot that I had mentally picked on the journey in. The place I chose was not as close to the reedbeds as I would have liked, but there was a small hawthorn bush as cover and the birds were close by.
They were moving quickly from stem to stem and their miniscule weight bent the seed head down into the cover of the surrounding reeds. But luckily they were staying in the same general area. I hoped that it would only be a matter of time before they ventured close to the edge of the reed-bed and allowed me a clear shot. 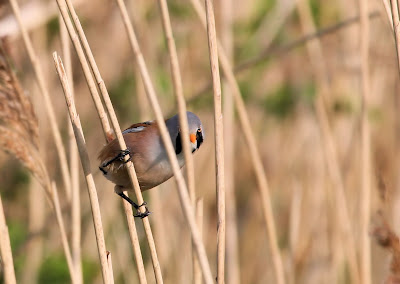 I sometimes feel as predatory with a camera as I might if I had a gun. In both instances, there is an element of ambush or stalking in order to achieve that clear shot. I wonder if the birds ever consider my body language. After all many birds, such as Cattle Egrets and ox-peckers have intimate relationships with other mammals, why do they feel uncomfortable near humans? Perhaps it’s the lurking and the skulking that makes them suspicious. Possibly it is the response to a very real threat. There is shooting allowed very close to Oare Marshes and many of our migrant warblers may have been shot at as they passed through the Mediterranean countries on their way here. 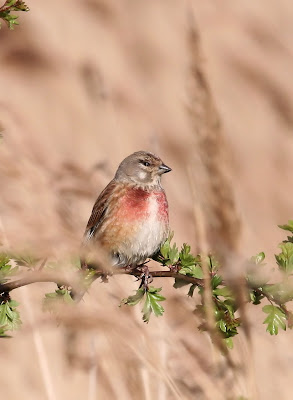 As I waited a Linnet stopped to see what I was up to.
After a while I felt that I had blended nicely into the scene and the birds were moving a little closer. I risked a little “pishing” to try to pique their interest. This had a great effect with 2 males coming right out of the reeds and a third flew a big circle around me to check me out. This gave a great chance for the photos below. 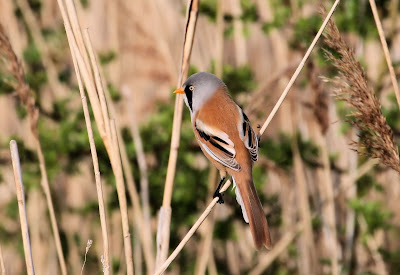 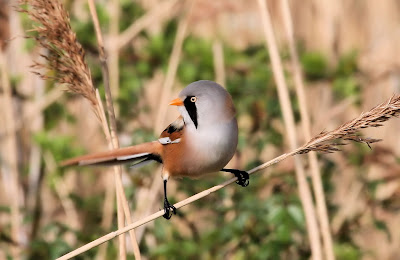 I was concerned that I was disturbing them as only the males came to investigate the “pishing”. If their interest had been stimulated, then I might have expected to see the females coming closer too. As it was I think I must have caused them to perceive a threat and the males were reacting in a defensive manner.
Once the males had satisfied themselves that there was no threat, they moved back into the reeds, but occasionally popped out again to keep an eye on me. They appeared to be relaxed now and fed right on the edge of the reed-bed in front of me. 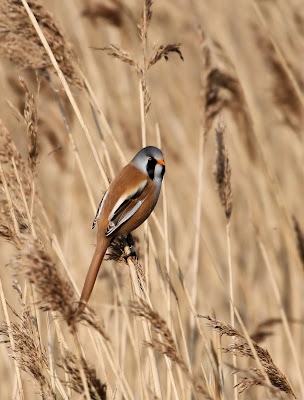 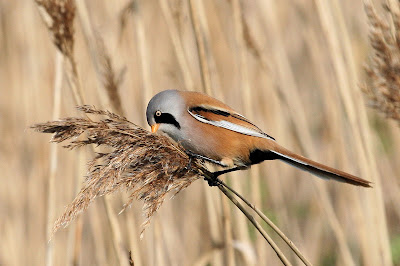 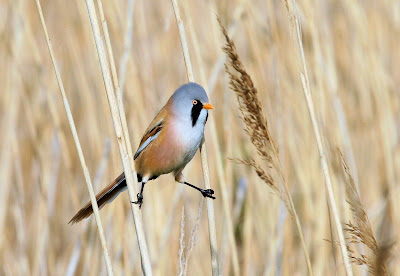 My last picture of the day was a Meadow Pipit trying to confuse me into thinkiong it was a Tree Pipit. 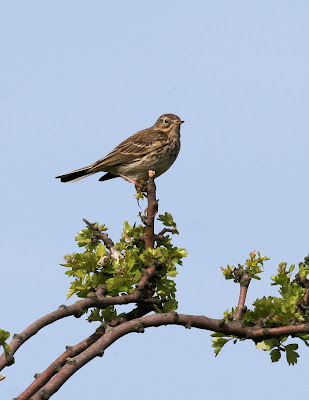