This week, I am going to Newark, New Jersey, twice. We leave for the first sector on Saturday and return into Heathrow from the fourth sector on Thursday morning.
Our designated crew hotel is undergoing renovations and so we have been relocated for the first half of the trip. We stayed in East Rutherford, which is surrounded by huge phragmites reed beds known locally as the Meadowlands.
The brief glimpse afforded to me from the bus on the way to the hotel, looked very interesting, especially given my recent phragmites adventures at home. But this being America, the meadowlands within sight of my hotel window were out of reach. The USA does not provide good facilities for pedestrians. Indeed hotel concierges across that great country reserve their most quizzical looks for “Limeys” who suggest that they might like to walk somewhere rather than drive.
There were however smaller patches of reed beds interlinked with torpid channels. It was possible to reach some of these, but only after walking along the hard shoulder of the freeway and scrambling over the crash barriers and down a precipitous slope with one of the aforementioned torpid channels at the bottom. A police car spotted me on the access ramp and braked as if to stop, but there was a big build-up of traffic behind him and so he continued on his way.
The patch I was exploring was bordered by a mosaic of car parks and offices in an area known as Wall Street.
The temperature on the previous day had reached a surprising 31C and today was hotting up too. It was predicted to pass 30C again.
I had hoped for some rallids which must have been in there somewhere, but none showed themselves. There were some Tree Swallows nesting in a stump and plenty of Red-winged Blackbirds calling and displaying from the trees along the edge as well as in the reeds. There were some carp in the shallow water chasing each other as if about to start spawning.
An open-water area harboured a flock of orange-legged yellowlegs and I stopped to see if I could decide between the greater or lesser versions. 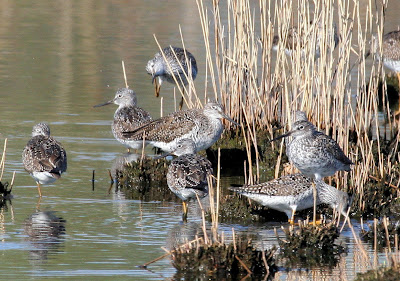 As I sat a rustle in the fallen reeds beside me caught my attention. Something large was moving around in there. For some reason, I immediately thought, ”Skunk!” and moved myself to a safe distance. The creature never showed itself, but I did see 3 Muskrats as I continued along and I suspect that my skunk was actually one of those.
The yellowlegs were roosting on small tussocks of cut reeds and I could clearly see an upturn to their bills, characteristic of the Greater Yellowlegs. The Lesser Yellowlegs has a thinner and straighter bill. Barring on the flanks served to confirm. 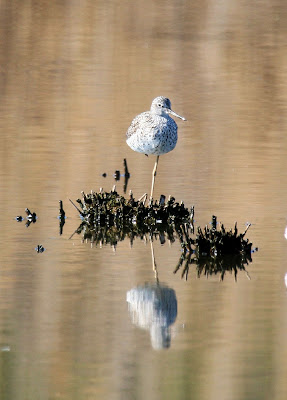 I realised now that I had wandered close to another Tree Swallow nest. The birds claiming the hole in the tree were being very attentive to me and swooping fairly close. When I withdrew, the swallows calmed down and alighted onto reed stems to take stock of their situation, kindly posing in the process. 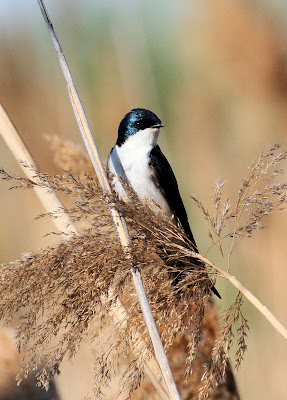 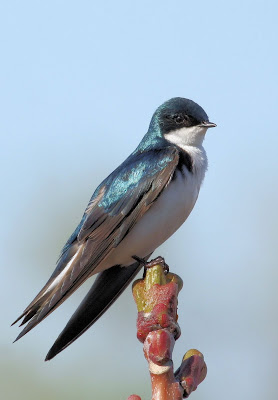 There were occasional attempts at landscaping as I passed through the back lots, car parks and dumpster areas. Like little oases in the tarmac, each held something to cause me to linger. A Song Sparrow was belting out his refrain from a short tree while some White-throated Sparrows hopped about beneath a picnic table. For the first time I heard 2 mimids singing together. A Northern Mockingbird was singing richly and repeating each phrase 2 or three times, while a Brown Thrasher gave his varied calls without repetition. I even managed my first picture of the thrasher. 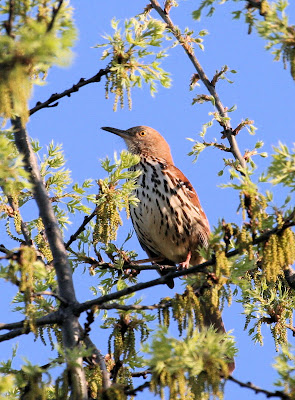 Returning to the hotel brought me past a Red-winged Blackbird in full display. He wound up his “Kong-koreee” fluffed up his feathers and thrust his shoulders forward to show off his epaulettes to their best effect, all the while apparently suffering a grand-mal seizure. 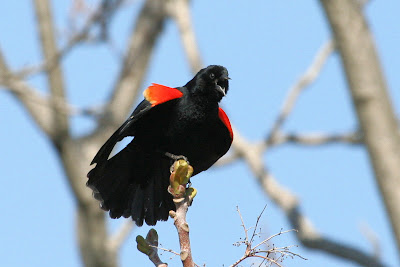 On the edge of the reeds just below the singing blackbird was a Muskrat seemingly fascinated by the display. 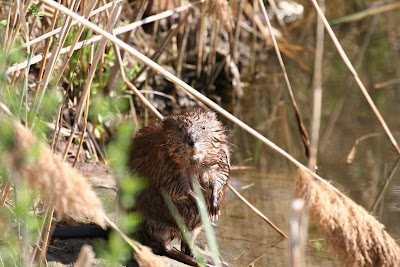 Later in the afternoon (when ideally I would have been resting in preparation for the overnight flight back to London), I popped across the road to the cemetery to check the larger trees there and see if I could find any warblers. It is after all the second half of April and I had only seen 2 species earlier in the day, a Blue-headed Vireo and a few Yellow-rumped Warblers. These were seen at the little road running along the bottom of the cemetery. I later found that my wander down that track would have been considered trespassing if anybody had seen me. Ooops!
In the cemetery I missed a beautiful chance for a picture of a Red-tailed Hawk. It was sitting on a horizontal dead branch in full view. He was well lit by the softer afternoon light, and he was scratching into a crevice in the branch while flickers mobbed him. I am guessing that the flickers had their nest here and the hawk had cornered one of the birds inside it.
Because of the heat, I had opted to travel light, ie without the big camera and lens. This was such a good-looking picture that I rushed back to the hotel but was, alas, too late. The hawk had given up and left by the time I returned. Still, I did get a shot of a PalmWarbler, which brought my warbler total to 3 species. 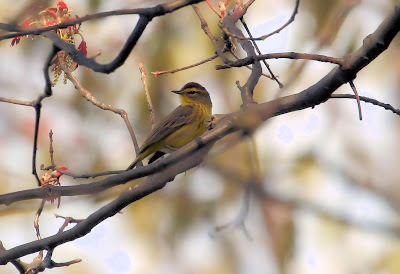 Wish me better luck for the 2nd leg. Woodbridge here we come.

The temperature was holding up when we arrived back into Newark for the second part of the itinerary. I hired a bicycle to explore the area around Woodbridge where we were staying this time.
I started at Merrill Park. This is a pleasant park which has managed to combine social, sporting and ecological needs into a neat bundle. It stretches from West to East following the flow of a small river. The southern bank of the river was sloped and wooded with understorey tangles and a good natural feel. The northern bank held the grassy areas, picnic sites and sports fields.
A ride downstream along the northern bank produced surprisingly little. A few Red-winged Blackbirds, Mourning Doves and American Robins. I found a likely looking spot to sit and wait for something to come to me. I had chosen a gap between some large trees in the hope that warblers would cross the open area on their passage through. There was also a good view across the river into the tangled slope of the south bank.
Sadly the warbler idea came to nought. A Blue-grey Gnatcatcher fell to my cunning plan by crossing the gap, but that was all. Most productive was a tree just a few meters away.
After sitting for a few minutes. I heard a Hairy Woodpecker call. 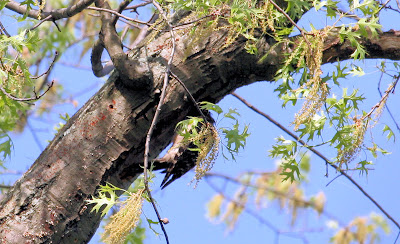 Sure enough the bird appeared from the far bank and made for a hole in the nearby tree. During the hour or so that I sat vigil, a pair of them returned 3 or 4 times each. I could see the entrance hole and saw the pair pushing their heads inside, though I heard nothing from within. I am assuming that they were feeding young.
Next came the White-breasted Nuthatches, 2 of them spiralling around the trunk and feeding vigorously from the same nearby tree.
Across the river were A Red-bellied and a Downy Woodpecker and some Blue Jays.
Downstream was a small gravel bed dividing the river into 2 channels. On the far side was a medium-sized wader. 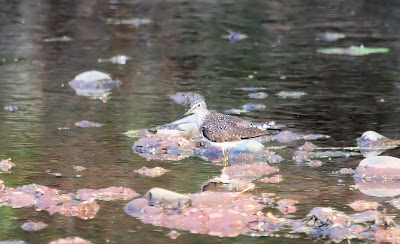 It was a Solitary Sandpiper, only my second ever sighting of this bird. The light was fading by now and I still wanted to visit Roosevelt Park to trail-blaze for the next morning. So I grabbed a quick pic and moved on. On the way I passed through Evergreen Meadows, a small housing estate with a preserved area around it. 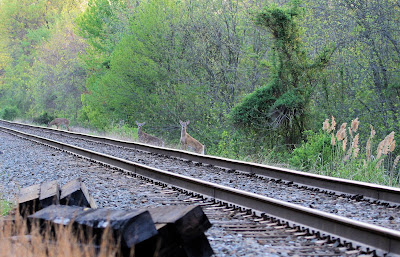 Then as I approached a railway bridge, I thought I saw some deer on the embankment. I stopped beyond the bridge and climbed the slope on the other side of the tracks. 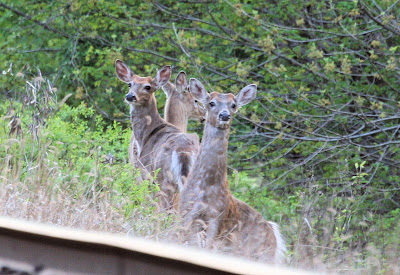 Sure enough, there were four White-tailed Deer which waited just long enough before giving a demonstration of the phrase “high-tailing” and showing at the same time where their name comes from. 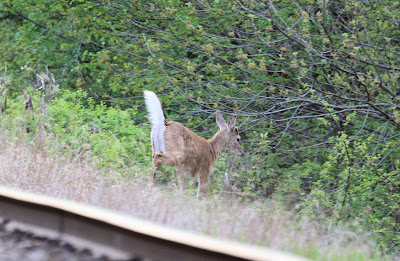 On my way back to the hotel I passed a bar and recognised a colleague. I stopped for a while and was subsequently delayed the next morning. The weather was a little hung-over too. The temperature had plummeted to 13C. It was overcast and raining. The wind was coming from the North and I anticipated lots of warblers struggling to make headway and so stopping to feed instead. There were a few Yellow-rumped Warblers flitting high in the oaks. A Cat bird sat and sang for a while, reminiscent of a scratchy Robin. Taking the Northern Mockingbird and the Brown Thrasher from the first leg into account, this completed the list of mimids that I was likely to see in New Jersey.
I reached Roosevelt Park and found some Barn Swallows flashing in and out from under the outflow bridge on the lake. There were 3 Double-crested Cormorants and a Song Sparrow and further round the lake, 2 Northern Rough-wings were collecting mud from the island.
Roosevelt Park is well wooded and has areas with undergrowth, particularly along by the stream. Here there were American Goldfinch and Eastern Phoebe. But again I failed to find warblers.
The weather did not look conducive to photography this morning so I didn’t bother to bring the camera. So, I have no pictures to show what an attractive place Roosevelt Park is and I am sad to say that I probably did not do it justice from a birdlist point of view.

On the way back to the hotel I committed my fifth misdemeanour of the trip.
It was a disappointment that my rap sheet was longer than my warbler list
(possibly more than a dozen in total but I am only counting each different one once). There was the trespassing and walking on the access ramp from the first leg. To that add cycling on the pavement, trespassing on the railway (a separate trespassing offence). To get back to the hotel I had to ride on the hard shoulder of the freeway against the flow of oncoming traffic. This is another good reason for writing anonymously.