A morning in Tel Aviv

This week Tel Aviv.
Tel Aviv is situated on the shore of the eastern Mediterranean.
The field guides indicate that there is a strong migration route through the area, so I was hoping to see plenty of warblers passing through. There were plenty, but only of a very few species. There are also a few specials from the area.
The Syrian Woodpecker is strikingly similar to our Greater Spotted Woodpecker, but with the addition of some light streaking on the flanks and the lack of the barred tail-sides.
The Palestinian Sunbird is unmistakeable as the only likely sunbird of the region.
The Graceful Prinia is distinctive with dark and light spots at the end of each feather on it’s strongly graduated tail. 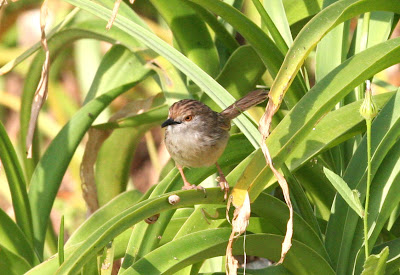 So these were 3 targets to look for during a stay which allowed me a very quick outing in the evening when we arrived, and the best part of the next morning.

Across the road from the hotel is a tiny park with a bus rank and childrens’ play area. It is a very unlikely spot to find much bird-life, but it constantly surprises me. I have found Eurasian Wryneck, Bluethroat, Black-capped Jay and the sought-after Syrian Woodpecker here in the past. This evening was only a very quick visit of about 40 minutes before the light began to fade. A group of refugees had made camp in the park and I felt uncomfortable there once the other park users moved on, so I left while the going was still good. 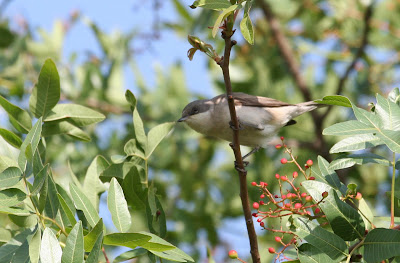 I am ashamed to say that I was not able to correctly identify a Willow Warbler. I have plenty of excuses that I used to save face, but that’s all they are excuses. They were actually Lesser Whitethroats who had been feeding in a bottlebrush shrub and had picked up yellow pollen stains on their heads and throats. 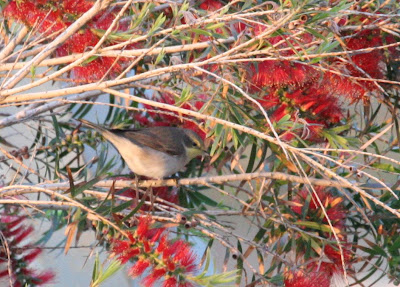 The next morning became a trial with my camera, freshly back from the menders, misbehaving, my monopod broke, my lens jammed and it took nearly 45 minutes to get to Hayarkan Park, supposedly just 10 minutes from the hotel.
Park Hayarkan, to use it’s correct moniker, runs along the Hayarkan River flowing east to west into the Med. The western stretch is known as the Sportek and is fairly sterile as far as birdlife is concerned. It is mostly sports fields, but with the saving grace of the scant riverside vegetation and a few bushes.
Here there were Pied Kingfishers and Blackcaps. Common Bulbuls, Common Mynas and Roseringed parakeets were noisy and obvious. These were to be expected unlike the flock of Monk Parakeets which I must assume had escaped from a childrens’ play park further upstream. 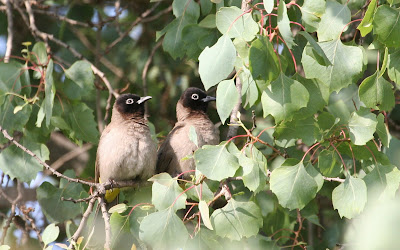 The further upstream I walked, the rougher the park became. By this I mean, the people using the park remained polite and non-threatening, but the vegetation became thicker, ranker and far more birdy.
Now I started to find the prinia and some more of the Lesser Whitethroats. A Black-crowned Night Heron roosting within a couple of meters of a busy pathway seemed oblivious to the joggers, cyclists and road traffic. I do not recall seeing one napping with it’s bill tucked into it’s breast before. I have no reason to suspect it of abberant behaviour, but I am surprised never to have observed it before, after all BCNHs are widespread and common and I have seen them many times. 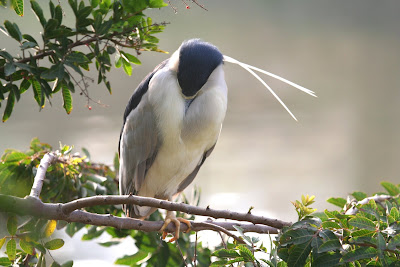 There is a small garden on the north bank of the river and here were the first Palestinian Sunbirds of the day. Flowering trees attracted them in and I sat watching a proud male calling from the top of one of them, his dark plumage flashing with blue and purple as he changed his angle to the sun.
White-throated Kingfishers were very common along the river and their descending call became a very familiar sound. 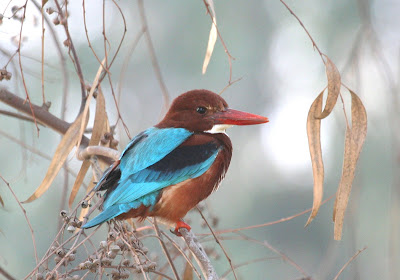 The river forks about 2 miles inland. And I took a bridge across the north fork and found a large area planted with eucalyptus and large yellow daisies. There are plenty of picnic tables, a large children’s adventure area and a cycling circuit. Beware of the cyclists.
This looked promising, but yielded little until I came back to some indigenous habitat back on the north bank by a large lake.
A pair of Egyptian Geese caught my eye at the river crossing, but they were amongst a lot of domesticated mallard-types and Muscovy Ducks. Possibly someone’s idea of an exotic collection. A Pied Wagtail showed beautifully by a water control system and I gave the camera a full workout on it. 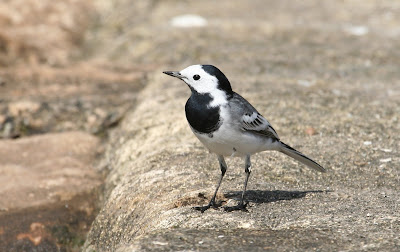 Right alongside, a Spur-winged Plover posed graciously for me. 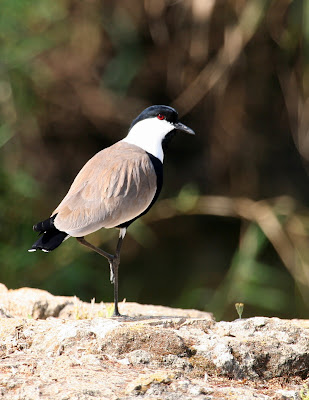 Along the lakeshore, the Lesser Whitethroats were abundant and had a few Chiffchaffs mixed in. A bottlebrush tree held 6 blackcaps and my lens jammed during what should have been a terrific photo of goldfinches on a flowering thistle. Perhaps the purple and green of the thistle with the yellow and red of the bird, overloaded it’s colour capabilities.
Posted by Redgannet at 17:13