My knee was on probation today to see how well it could hold up. Rain was predicted and was looking likely. I took a bus, any bus going north on Madison would have done, to 85th St and cut across to the park from there.
This brought me into the park at the southern end of the reservoir. 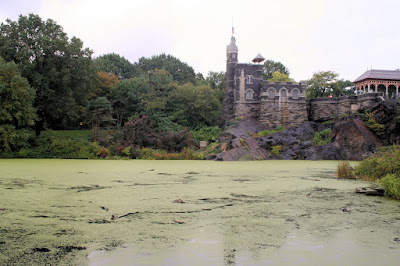 South from here, overlooked by Belvedere Castle, is Turtle Pond. Today it was covered with a mat of duckweed. Mallards were there the most obvious duck on the pond with 30 or so Gadwall in loose groups. 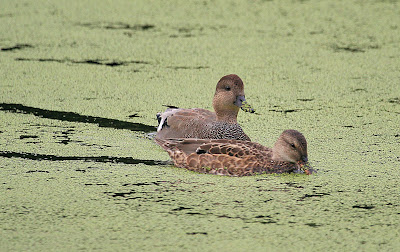 I watched from the jetty in the northeast corner of the pond. Beside me a Grey Catbird called from thick undergrowth, then hopped up into an open space at eye-level to feed quickly on the red berries. 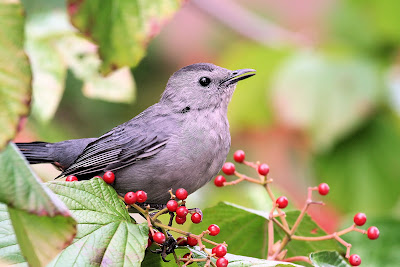 The flag on the castle was flying at half-mast today. The resident red-tail found it a good place to perch for a while. Out in the open, he was less likely to be bothered by smaller birds trying to move him along. I guess that while he is in full view, he poses less of a worry. A single Chimney Swift was feeding above. 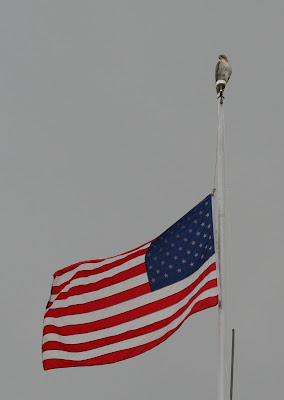 From the castle, I moved into the meadow on the west side. An Eastern Phoebe was hawking from a perch on the low fence. American Robins on the lawn found the fence a good refuge as I passed. 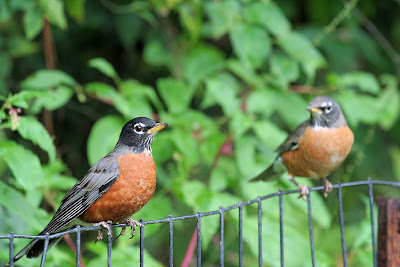 There is an area above the upper, west lobe of the boating lake that has been fenced off to protect a re-planting project. Here were Yellow-bellied Sapsucker, Wood Thrush, Grey Catbird, Common Yellowthroat and Blue Jay and White-throated Sparrow.
The robins and catbirds had been the most conspicuous birds of the day, followed by the jays whose constant calling followed me through the park.
Near the Azalea Pond was a shallow part of The Gill stream. It should be an easy enough puzzle to work out which bird was bathing there. 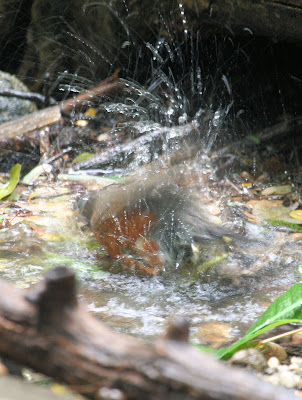 I passed The Oven, hoping that a few straggler Ruby-throated Hummingbirds might be feeding in the Jewelweed. They were not, but a Blue Jay sat out in a pleasant pose. A female Rose-breasted Grosbeak looked lonely on the willow. 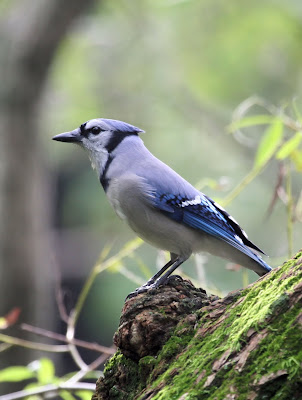 My knee had held up well and I decided to give it one more task; get me to Strawberry Fields. Sparrows and Eastern Towhees were flitting about through the trees there. A bird party suddenly approached. Ruby-crowned Kinglet, Brown Creeper and Chestnut-sided Warbler passed through as I watched.
I was about to call it a day when the redtail flew through the trees and landed just ahead. Among the trees, the hawk was considered a much bigger threat and the jays were mobbing it madly. 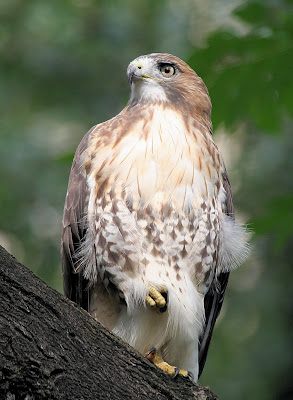 I could hear an impression of the hawk's wheeling call. Earlier, I had heard something very similar and assumed it to be a jay mimicking the call. Actually, it was a Grey Squirrel making quite a passable impersonation. 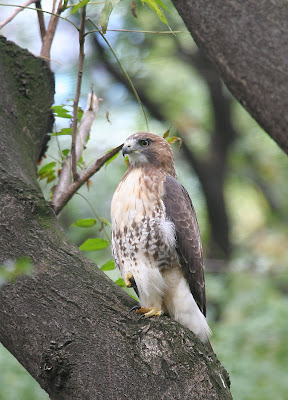