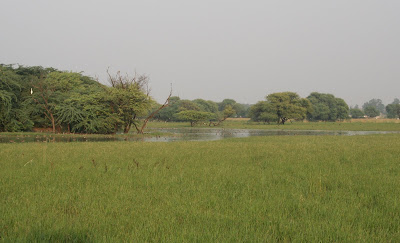 The tranquillity of Sultanpur National Park seemed quite surreal after two and a half hours in the chaos and mayhem that is New Delhi traffic. Strikes and civil disobedience had brought the roads to a standstill while the police and cattle watched, bemused.
Sanjay, my driver for the afternoon was determined to get me to Sultanpur and cut across fields and even through someone’s garden to gain some positive forward movement. Finally with a big sigh of accomplishment, he pulled into the car park at 15.00. 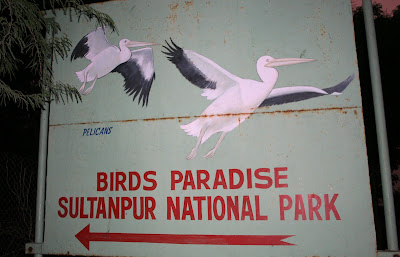 Normally, the journey would take around one and a half hours from the city. Entrance fees are IR75 for a non-Indian with a camera. Sanjay and his car cost IR1200 for the return trip and a 3 hour wait.
Inside the park, it was wonderfully quiet apart from an hysterical man who wanted to take me to see some snakes.
But I had already spotted the first photo opportunity of the day and was aiming my brand new Canon 50D at a dragonfly. For more on the camera and the dragonfly, see the parallel post on http://www.redgannetsdragonflies.blogspot.com/

Sultanpur Jheel was wet. While this may appear to state the obvious, the lake only holds water for part of the year. It fills up during the southwest monsoon between June and September, but with no further supply, levels start to recede as soon as the rains finish. It is often dry by March.
It is shallow with wide marshy margins and a few islands with nesting trees for storks, herons and cormorants.
Waterbirds take advantage of the lake during it’s season and had already started arriving in good numbers by the time of my visit in the second week of October. Duck were well represented with 4000-6000 birds on the water and roosting on the islands. I counted 8 species of duck. 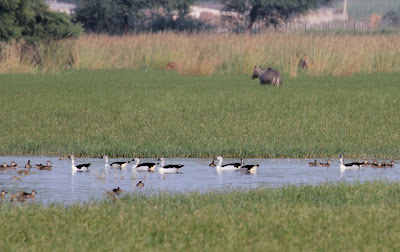 The Comb Duck stood out at a distance, but I didn’t spot the Ferruginous Ducks until I sat down and had a good hard scan. There was a White-breasted Waterhen beneath the overhanging vegetation on one of the islands and a few coots, moorhens and Indian Swamphens.
Purple Herons had obviously had a good year with at least 6 young birds feeding amongst the high water grasses. 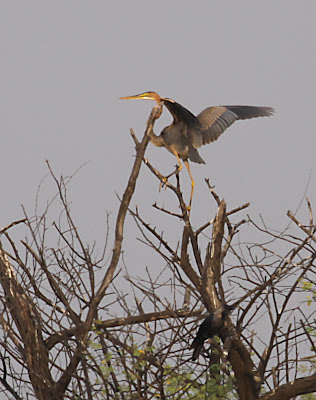 Other herons included Great, Intermediate, Little and Cattle Egrets and a roosting Black-crowned Night Heron. Across the water a white expanse came into focus as Black-headed Ibis and Painted Storks. 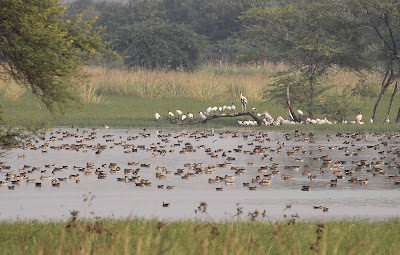 2 woolly-necked Storks flew over, but I didn’t see them settle.
A feature of Sultanpur is the Nilgai antelope. Some were grazing amongst the tall grasses and sedges surrounding the water. They appear to have no qualms about the water and will readily cross to the sanctuary of the islands. 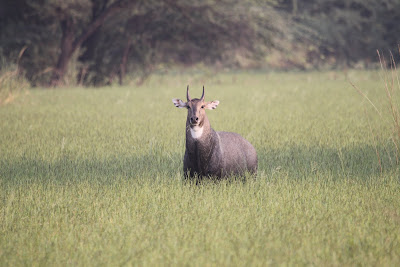 The females retain their caramel brown through adulthood while the males progressively develop a slaty grey colour as they mature and go by the name of Blue Bulls.
I was eager to test the 15.1 million pearl-plated pixels of my new camera and tried the picture of the Nilgai females which were 400m away.

It has been cropped to make the animals the subject of the picture and I think the camera did quite well from that distance.
I am sure it was a nice day with blue skies, but this picture of the painted storks says otherwise. It was possibly a white balance error on my part. 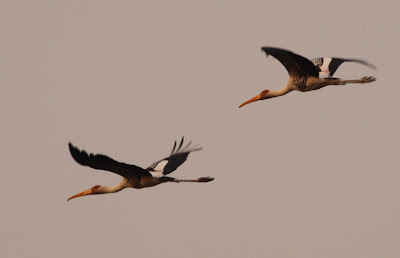 A narrow spit allowed me to get closer to the water, but I still could not approach closer than about 200m. 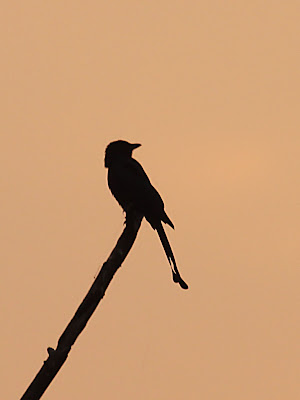 Black Drongo
A blockhouse, in the trees away from the lake, often holds Spotted Owlet, but they were not to be seen today. Instead a Grey-headed Canary Flycatcher flitted through the trees and a Black Redstart pumped it's tail on a nearby fence.
I must confess that the birding took second place today. I am easily sidetracked at the best of times. Today with the moist margins full of dragonflies and the added distraction of a new camera, I was like an alcoholic at a wine fair; trying everything with abandon, not worrying what it was. So I got a few nice pictures, but not of birds. I did get a bad picture of a Plaintive Cuckoo, the Grey-bellied Cuckoo is the race over most of peninsular India. I had seen a cuckoo earlier as it flew over, but could not count such a poor view. Only when I returned from the narrow spit did I get an adequate look at it in the top of a large bush.
Three youths had paddled out through the reeds into the water grasses closest to the water. They all carried cutting hooks and appeared to be harvesting the long grass, probably for cattle feed in the village. They were in the foreground when the birds spooked and the whole lakeful of duck took to the air. 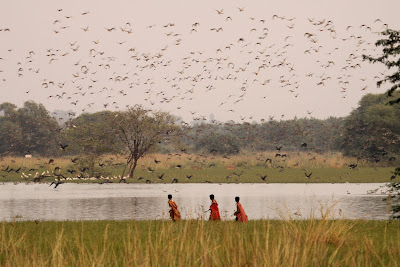 It is possible that a raptor was in the vicinity, but I didn’t see it.
Returning to the car, I encountered a small troupe of Rhesus Macaque, one of whom decided that the apple core in the netting part of my rucksack should be shared with him.
The light was almost gone by 18.00, but my last sidetrail of the day proved the most exciting. A Shikra flew out from low down in a tree and seconds later a Jungle Cat flushed from almost beneath my feet. 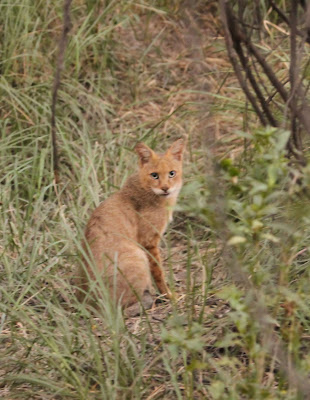 I just had time to register the long legs and short tail with 3 dark rings at the end. Luckily, it stopped a few meters down the path and looked back. The Jungle cat is bigger than the domestic moggy and lives wild across India. I had seen them before, but had never managed to get a picture of one.