The sun had already got his hat on by the time I left the hotel at 06.00. I was heading to South Platte Park and stepped from the RTD light railway at Littlewoood/Mineral just before 07.00. A bridge took me across the line and into a Park ‘n Ride car park. 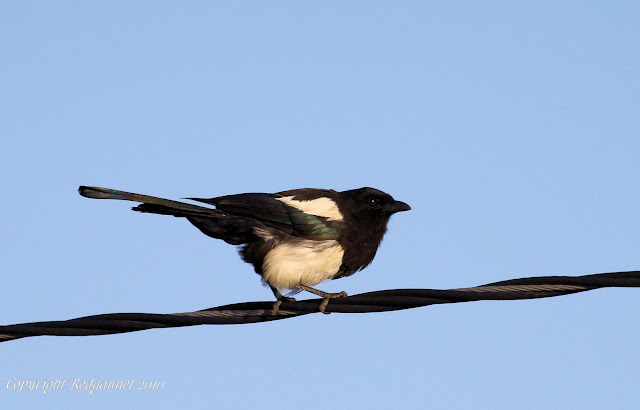 A Black-billed Magpie was perched on the wires in the overspill close to Carson Nature Center. The center is closed on Mondays, but the park is open from sunrise to sunset throughout the year.
The park consists of a complex of lakes with meadows and woodland. A cycle and walking path runs close to the South Platte River as it flows from southish to northish through the park. Only one pedestrian bridge, close to the nature center, crosses the river within the park. 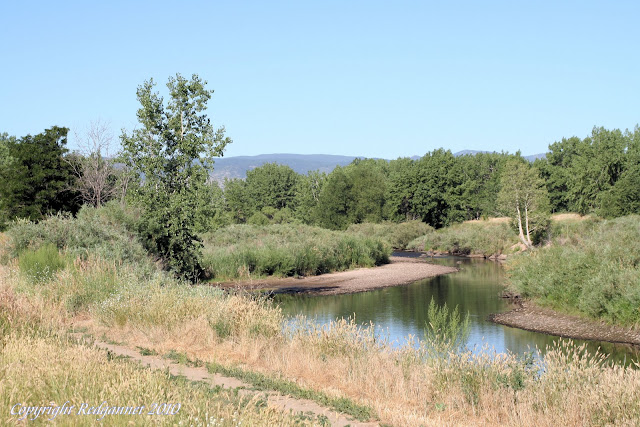 A few Red-winged Blackbirds were at the feeders and in the meadows surrounding the center. There were lots of Common Starlings feeding in berry bushes here too and one Western Kingbird.
Above the river, some Cedar Waxwings were picking insects from the air, and I spent a fruitless half-hour trying to get a picture.
Not knowing any better, I elected to continue down the east bank with the river on my right as I headed upstream (southish). The road bridge at W. Mineral Ave., was festooned with Cliff Swallow nests; they were all quiet now (3rd week of July). Just beyond the bridge, a discrete path led away from the river to a wooden platform overlooking a damp patch full of small willows and cattails. 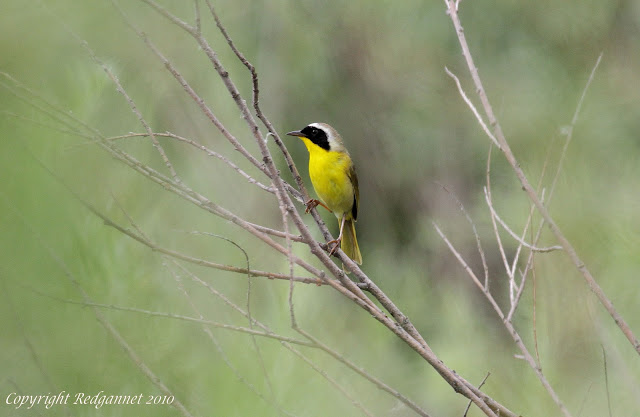 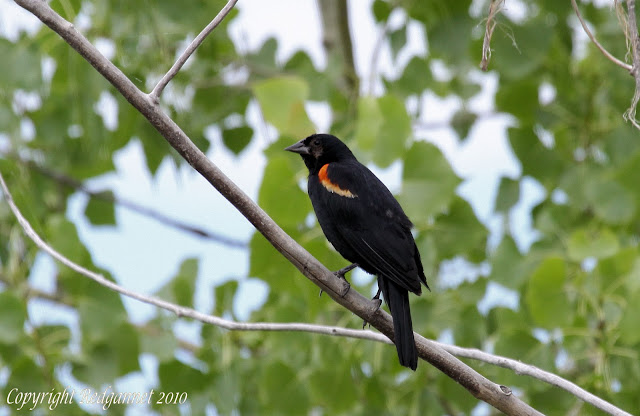 A call prefaced with 3 sharp “tic”s betrayed the presence of a Song Sparrow, but the bird did not show.
Back by the river, I continued upstream and encountered my first hotspot of the day. The path had entered some woodland and the birdsong here was intense. Song Sparrows and Yellow Warblers were calling noisily and a pair of Downy Woodpeckers arrived, whinnying. 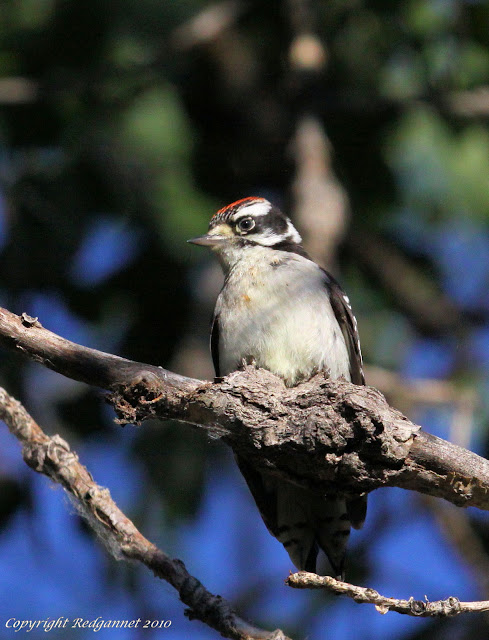 A Western Wood Peewee had sensibly found itself a perch in the shade. It was already hot, but that didn’t stop the House Wrens joining in with the chorus. 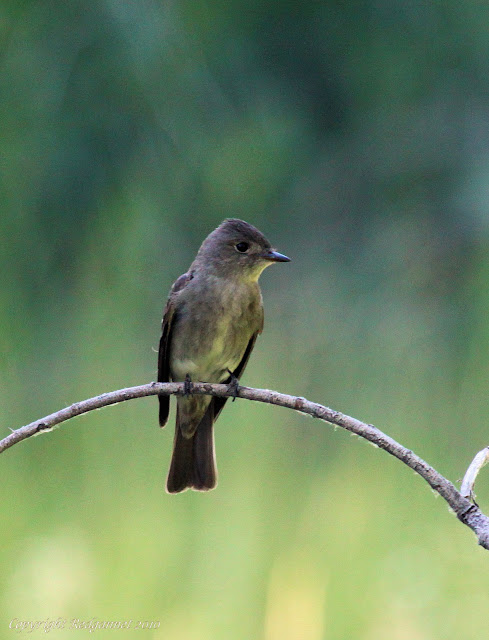 The path was quiet with only an occasional walker. It ran close to the river, occasionally veering into the trees. Another hotspot held more Yellow Warblers, Northern Flicker, House Finch and Black-capped Chickadee. A large shadow crossed the path ahead of me. I turned to look, expecting to see a Red-tailed Hawk or Turkey Vulture, but instead saw the flat-faced features of a Great Horned Owl. It crossed the river and landed in the trees opposite. 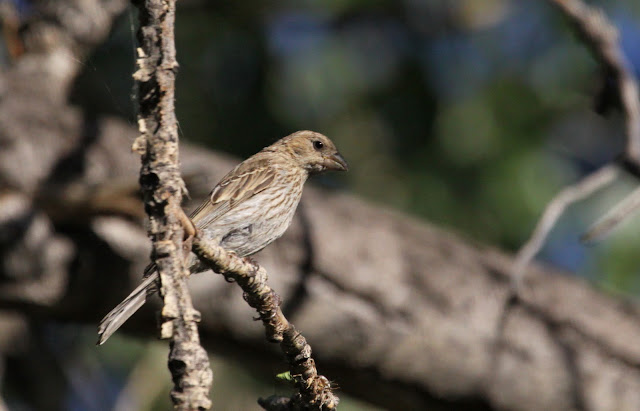 By now I had realised that what, on the map, looked like pedestrian bridges were in fact boat launching chutes. I would have already known this, if I had looked at the key on the map, but I hadn’t. I retraced my steps to the iron bridge at the nature center and crossed there. A young American Robin sat nicely on the way. 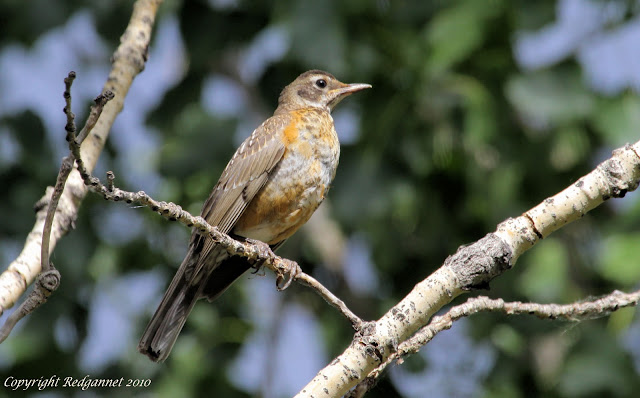 By contrast, the path on the western side was paved and a bit busier. Cyclists enjoy this path, but they were inevitably courteous and unhurried, unlike the House Finches which rushed off as soon as I raised the camera to my eye. 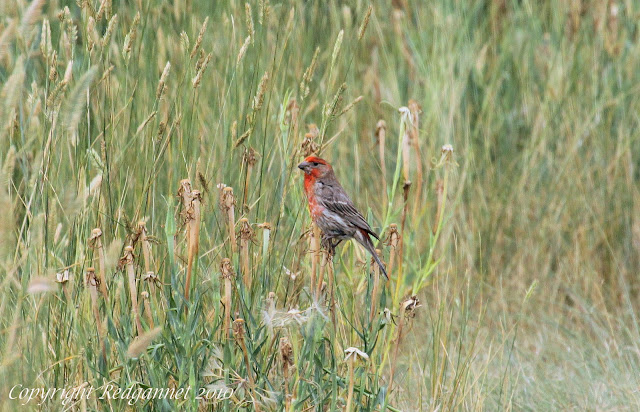 I looked for the owl briefly in the Mary Carter Greenaway. This area is protected and may only be viewed from the path or from a hide around the corner. The hide is not enclosed, it is just a screen with holes cut in it, but a cover provided some welcome shade from the sun which had brought the temperature close to 100F.
A House Wren was scolding something in a bush beside the blind and was too busy to respond to my pishing with much more than a quick, impatient glance. 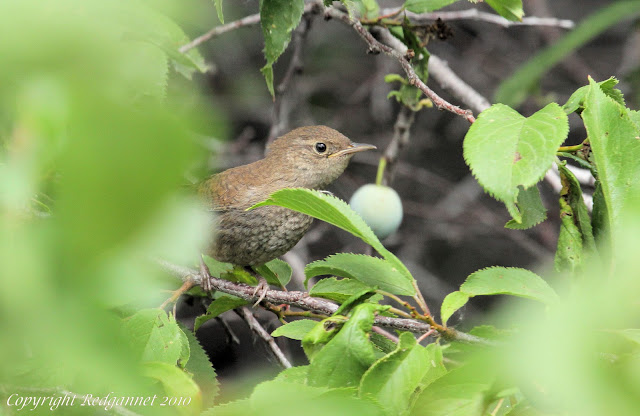 A strident squeak caught my ear as I rounded a corner. A colony (known as a “town”) of Black-tailed Prairie Dogs had deployed a sentinel which had spotted a couple walking their dog. The guard was squeaking his alarm to the others who were feeding in the surrounding grass. The town extended on both sides of the path (without counting, I would guess that there were about 50 burrows in a small area) so that each time anyone walked along, the town was put on orange alert. I had seen these animals before, but from a speeding bus on the way to the airport, I was unable to positively identify them. An information board at the viewing screen gave me the confidence to use my red crayon this time. 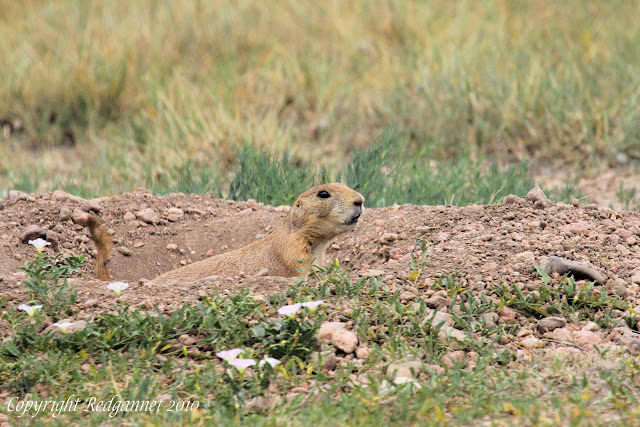 The sun was high and hot now. It would have been a good time to either rest in the shade or to go looking for dragonflies. Since there wasn’t much shade….
I followed the main path south again passing between 2 large lakes and found the following flying beasties. 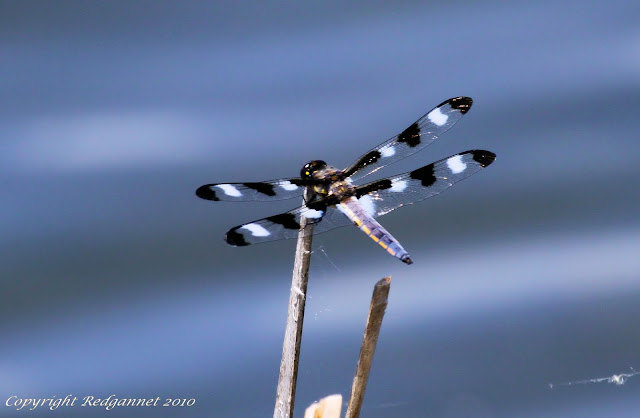 Superficially similar are the Twelve-spotted (Libellula pulchella) and Eight-spotted (Libellula forensis) Skimmers. The difference is easily seen if you count the black and white blotches on the wing (you get the eggs and I’ll get Granny pucker’d up). 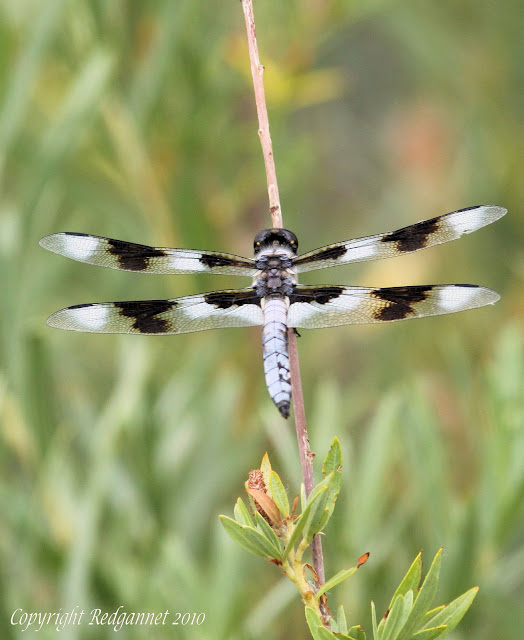 The Widow Skimmer (Libellula lucuosa) also has a few lookie-likies. It shares a similar yellow band on both sides of the abdomen with other species, but the broad dark bands on the basal half of both sets of wings is the characteristic feature to look for. 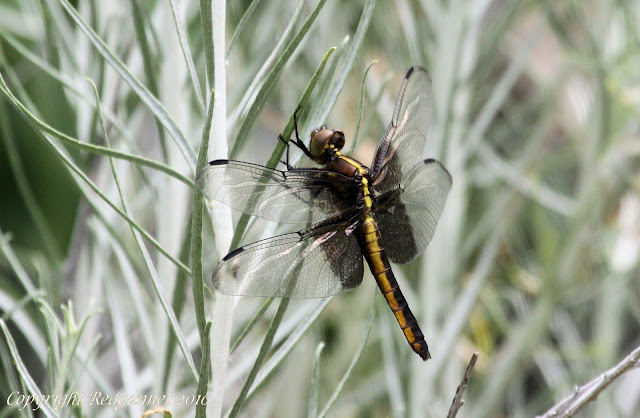 The one pictured is female. The male lacks the yellow piping, but the dark wing markings are a constant between the sexes. He develops a blue pruinose latter half of the abdomen and the wings include white blotches which may extend from the dark bands to the wingtips. I saw 5 females today, but no males which is the other way round to previous experience with other odonata. 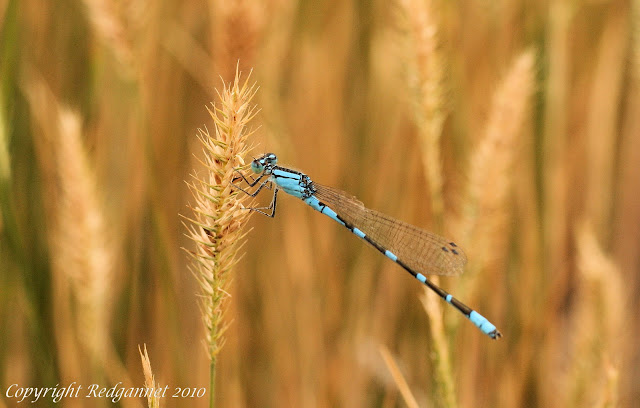 This small damselfly was away from the water’s edge in a patch of seeding grass. Its identity is still under consideration. My first thoughts are Arroyo Bluet (Enallagma praevarum). 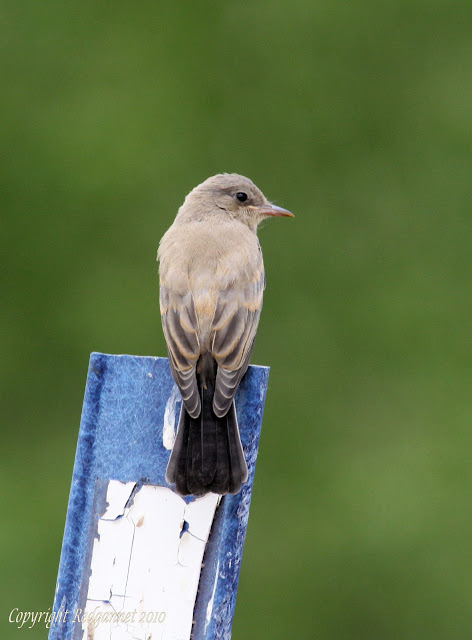 A Say’s Phoebe was hawking the same area of dry grass for a late lunch. I wonder what damselflies taste like? I have always thought that they would have a piquant flavour, but not quite as tangy as the Anisoptera. The phoebe returned to the post each time, but would not turn to face me and show its reddy, buff belly. 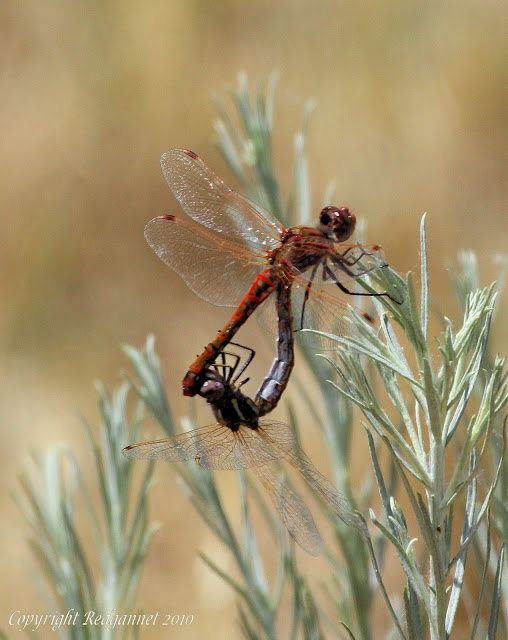 These are Sympetrum sp I believe, but the species escapes me at the moment. 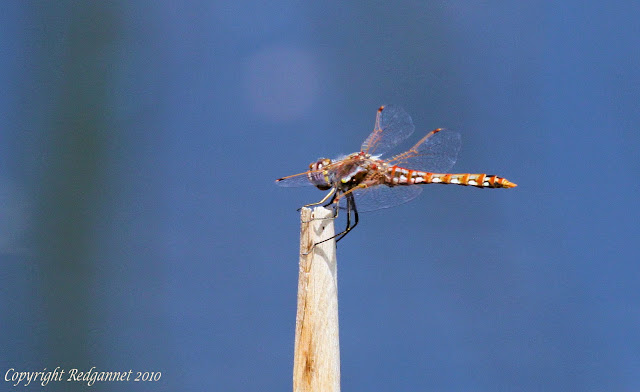 This one is a Variegated Meadowhawk (Sympetrum corruptum) which was seen over the water as well as high on bare tree branches and on the gravel path. 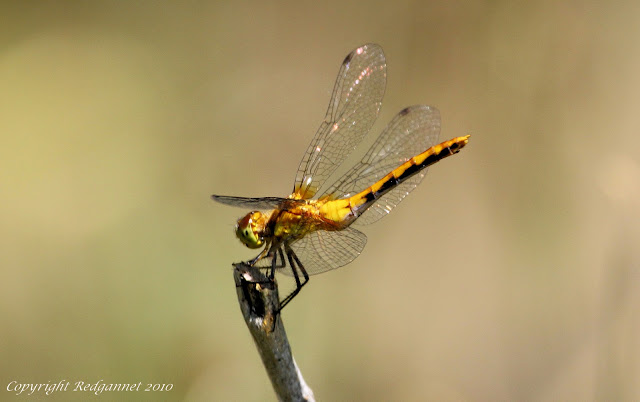 I am hoping that someone with a more experienced eye than mine could give me some guidance for this ode. I wonder if it could be a young Black Meadowhawk (Sympetrum danae)? All thoughts are welcome.While you are at it, why not venture an opinion on the two below. I am unable to commit myself on either of them. 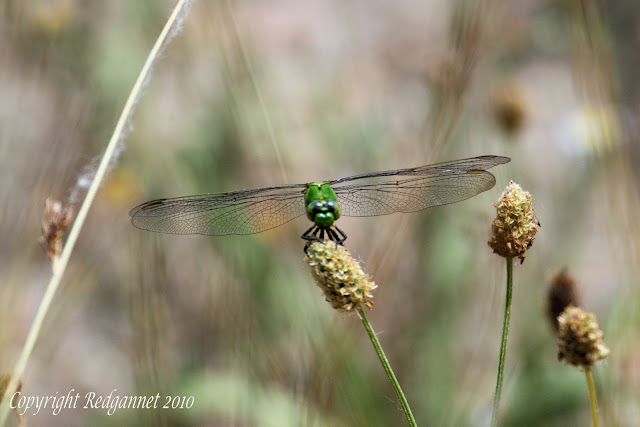 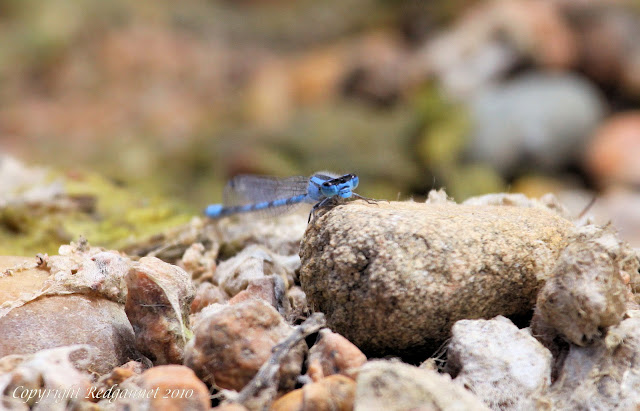 A last look for the owl on the return journey resulted in a Black-chinned Hummingbird instead. Then I trod on my glasses and ruined them, effectively putting an end to my day. I had been labouring with a cheap pair of binoculars today after dropping my best Bushnells and decollimating them. I didn’t realise how important a good pair are until I had to revert to a cheap pair. Even now, in a darkened room, I feel twitchy knowing that I don’t have adequate optics. What would I do if something needed looking at?
This morning, I turned right out of the front door of the Denver Marriot onto California. Two blocks along, I turned right onto 16th St and walked a block to Stout where the 16th St./Stout station for the RTD Light Railway is located outside Walgren’s.
From here, the D-Line runs services every 15 mins from very early (I caught the 06.12 service), taking 35-40 minutes to reach Littleton/Mineral at the end of the line. 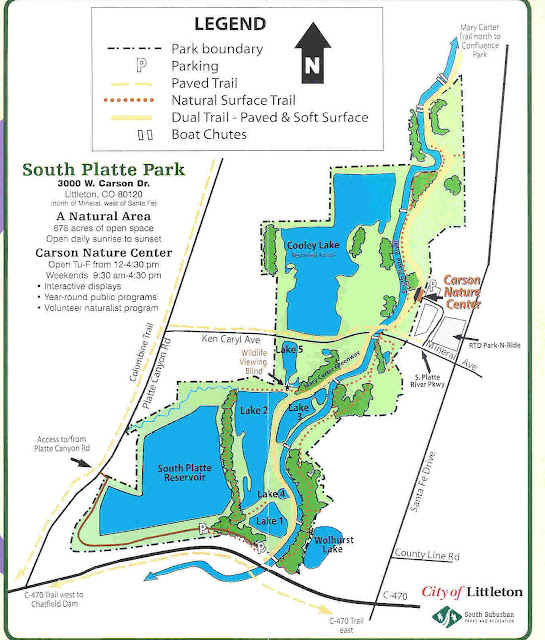 Cross the bridge and pass through the car park to reach South Platte Park and the Carson Nature Center. The nature centre has toilets and a drinking fountain. These were available despite the center being closed. Among the shops nearby at the Park 'n Ride were some eateries. Otherwise there are no facilities at South Platte Park.
Mammal Species; 3