The city of Boston steamed gently in the early summer heat. Despite it’s delightful appeal, Boston is still a city and therefore not the natural habitat for a Redgannet. 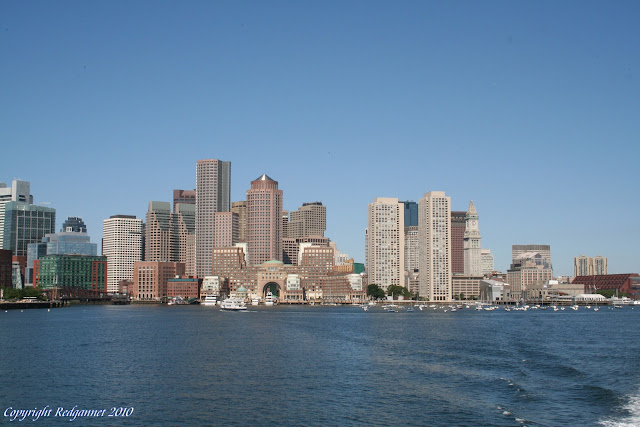 The Founding Fathers greatest gift to the city was to site it by the shore and within an hour on a fast catamaran, of Stellwagen Bank. This is a plateau that raises the seabed to within 30 meters of the surface on a line between Cape Ann and Cape Cod.

Here the cold currents are forced upwards bringing nutrients from the depths closer to their end users at the top of the food chain.
The New England Aquarium ( http://www.neaq.org/ ) runs whale-watching trips twice a day during the season which runs from April through October. 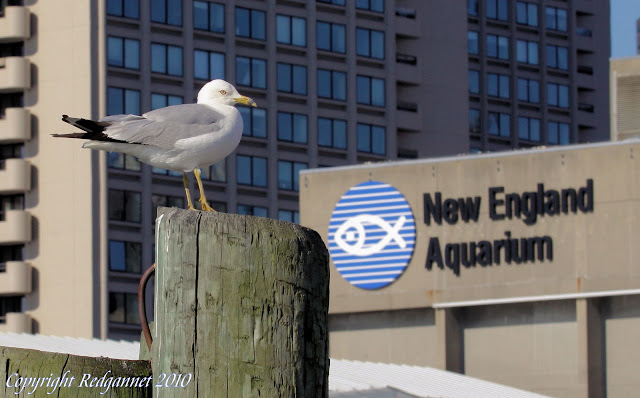 I caught the trip leaving from the dock at the aquarium at 09.30 (high season schedule). Trips usually last for 3 or 4 hours. I was concerned that this might be a little tight for my early afternoon flight back to UK, but the morning trip must return on time in order to take the afternoon trip out at 13.30, so they are reliable enough. 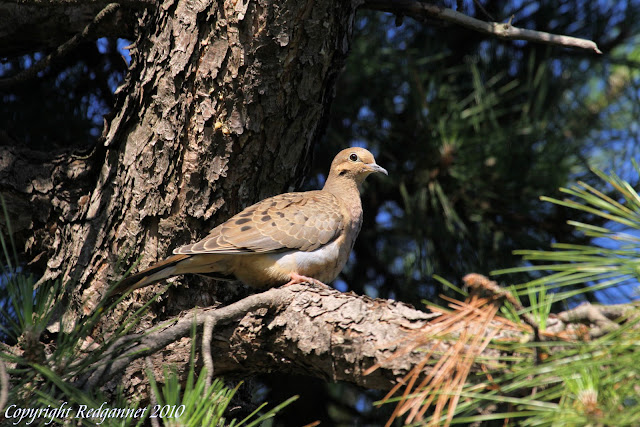 My first birds of the day had been spotted around the harbour area while waiting for the boat. A Mourning Dove sat well while Common Grackles flew over and an American Herring Gull rinsed itself in the shallow of the harbour. 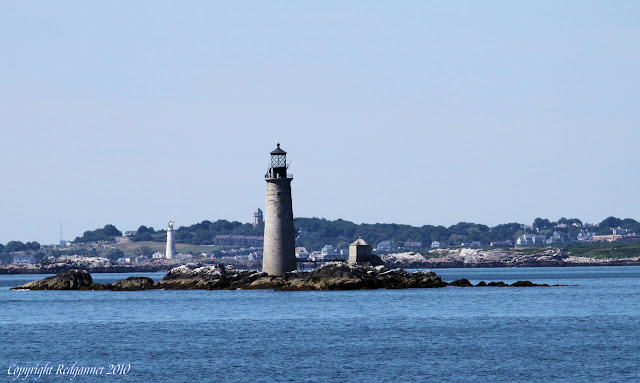 Once out on the water, a few more gulls were seen. A couple of ring-billed Gulls were outnumbered by occasional pairs of Black-backed Gulls. Double-crested Cormorants flew low across the water until we made it beyond the shelter of the islands and onto the ocean. Here an occasional Brown Booby was seen ( actually, they were far more likely to have been juvenile Northern Gannets. Please see comment below). 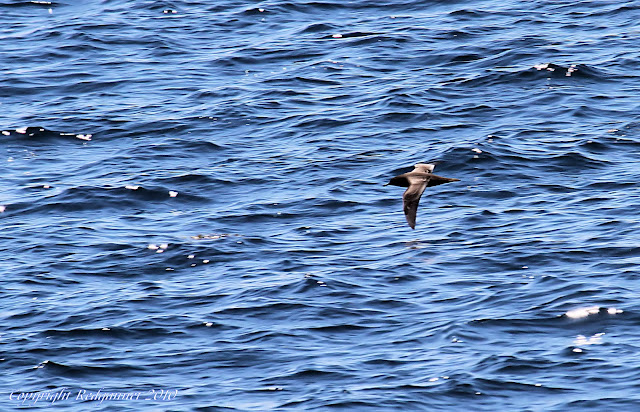 My first open-water bird was a Sooty Shearwater that flew abeam of us for a short way before crossing our bows.
Next was a Wilson’s Storm-Petrel which stayed distant and small in the lens... 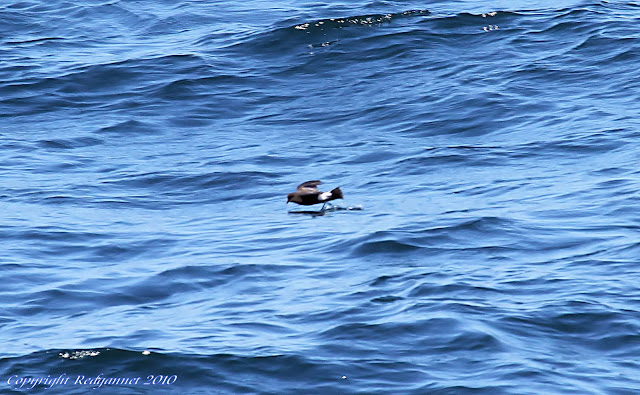 It was this bird that I had in mind when I considered whale-watching for today. I would love to get a decent picture of this little bird, but that is now a project for next time as the photo above was as good as it got. 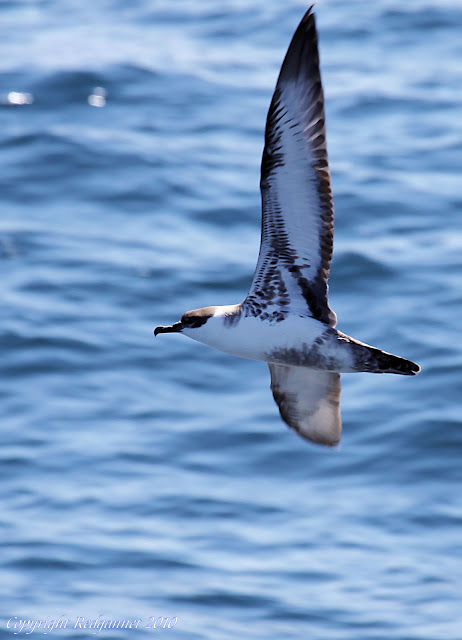 The most confiding bird was the Great Shearwater. This was the most numerous and the one that approached the boat close enough to make a picture. I had not brought my field guide with me and had to rely on the naturalist on-board to narrow my possibilities. I should have been able to identify the Greater Shearwater without help. 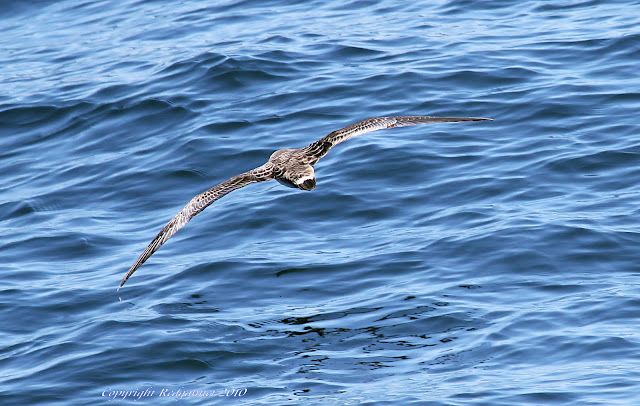 The combination of a narrow pale band on the rump, a white collar and a smudge on the belly is distinctive. The Sooty Shearwater, I felt fairly confident about and could think of no likely alternatives. 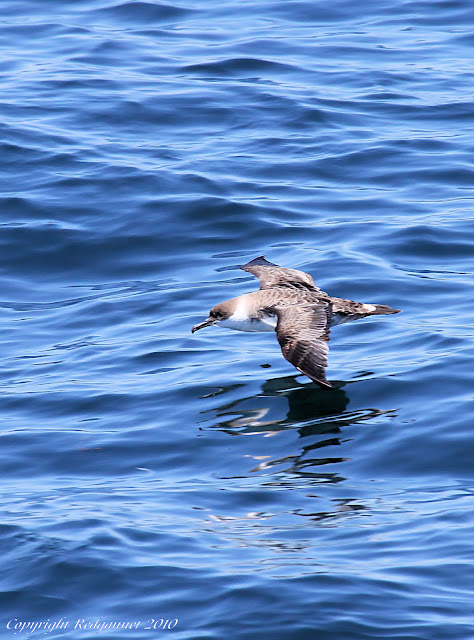 A sudden change of direction and a drop in the tone of the engines indicated that something exciting had been spotted. The public address struck up and informed us that a small group of whales were up ahead. 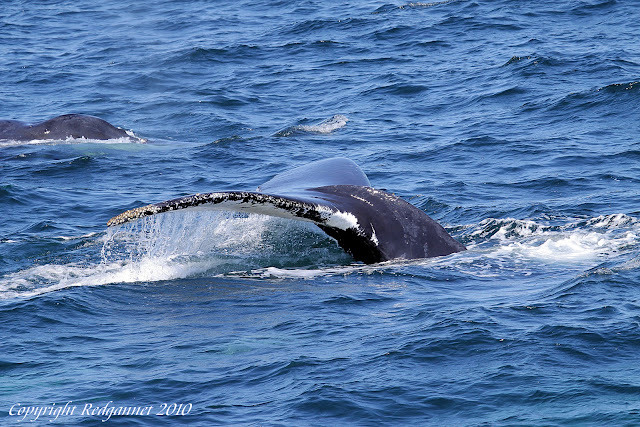 They were Humpback Whales, a mother with calf and an adult male. Their manner of movement suggested that they were feeding. The naturalist kept a commentary going while we stayed with the whales, describing their migration patterns and social interactions. He was very informative, but I had issues with the Captain who seemed to prefer to keep the whales at our 11 o’clock position. 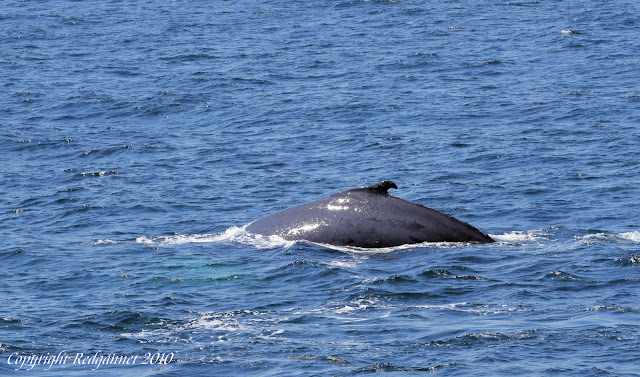 We had agreed a system of locating whales whereby straight ahead of the boat was 12 o’clock. Directly astern was 6 o’clock. I was at a point on the starboard bow that might be described as 2 o’clock. Get the idea?
For some reason the captain would manoeuvre the boat so that the best view of the whales was from the 11 o’clock point. This resulted in a rush to that part of the boat. I thought that the whales would move about and appear on different sides of the boat, so I would get my chance to be in the best position if I was patient. Time and time again, the captain shifted the angle of the boat to put the whales off the port bow. It became apparent that this was her preferred position so I relinquished my place at the starboard bow and joined the throng on the other side. Only then did the whales move into the 2 o’clock position and I was left on the wrong side again. We stayed with the group for a few dives and enjoyed a few tails as they took a deeper dive. 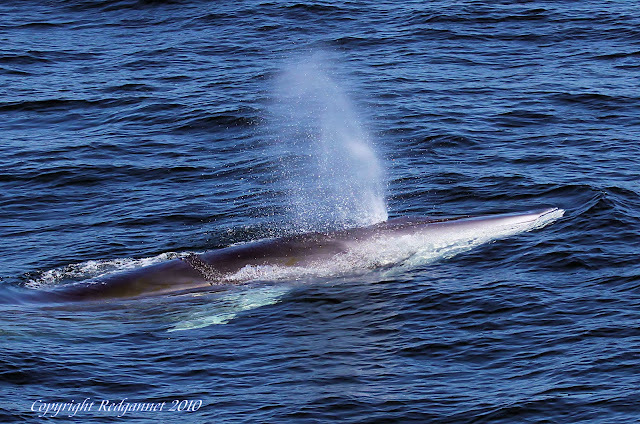 Reports were coming in from other vessels about some Fin Whales which were being watched in the vicinity. A democratic round of applause, gave the captain her cue to break away from the humpbacks and go in search of the world’s second largest whale.
As we approached, I was pleased to see that the whales were on my side and that I was in pole position. Then the captain announced that she was going to manoeuvre the boat so that the whales were in the 11 o’clock position again. I was beginning to take it personally until I realised that there was actually a half-good reason for this. The Fin Whale is asymmetric with a pale streak that runs from the lower jaw on it’s right side and extends along the flank. The corresponding areas on the left side are dark.
The captain had moved the boat so that the pale area was visible to us and we could see the asymmetry.
I was about to make comment on how rare it is to find asymmetry in the animal kingdom, but I suddenly realised how wrong that would be. Zebras, giraffes and the spotty or stripy cats are all asymmetrically patterned. Flatfish have a left/right bias. Fiddler Crabs have one small claw and one massive one. New Zealand’s Wrybill and the Black Skimmer of the Americas both have bills with a sideways bent. 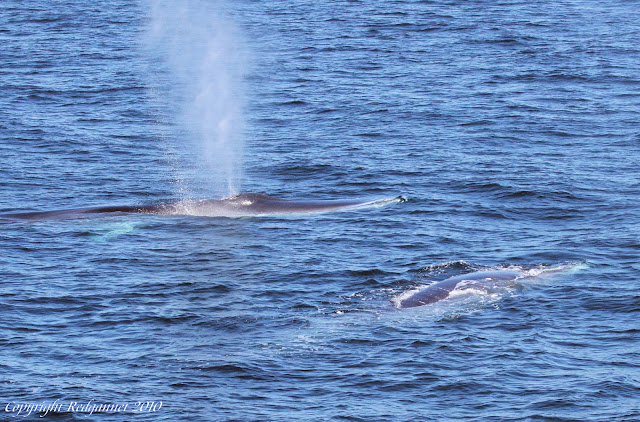 Anyway the captain was keen to show us the pale areas, so I was poorly positioned again. Nevertheless, we all had good views of a huge Fin whale and her calf. Eventually.
On the way back towards the shore 3 shearwaters flew across our starboard bow. I could see that they were smaller than the Great Shearwater and did not have the characteristic traits as described earlier. These were Manx Shearwaters. I have not seen any of these since I last went whale-watching in Boston. 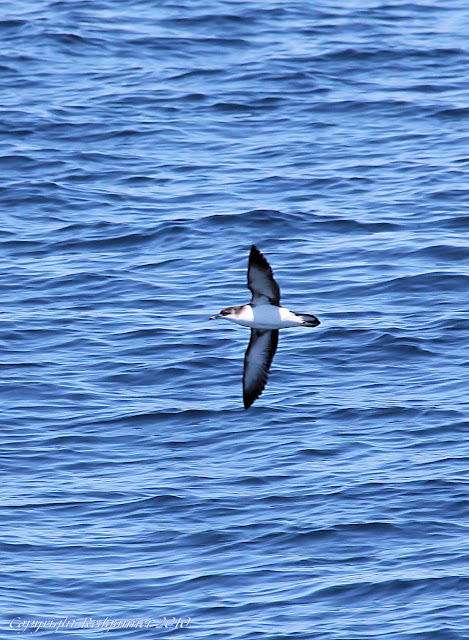 Despite the temperature being very high in the city, it was cold out on the ocean. The Voyager 3 makes around 25 knots so it is windy too. The ride back to Boston was only made bearable by the Manx Shearwaters and some pleasant company from Wisconsin. I would advise a jacket or an inside seat whatever the weather.
The subway system in Boston has a stop right beside the New England Aquarium. The stop is called Aquarium, so it shouldn’t be too hard to find. 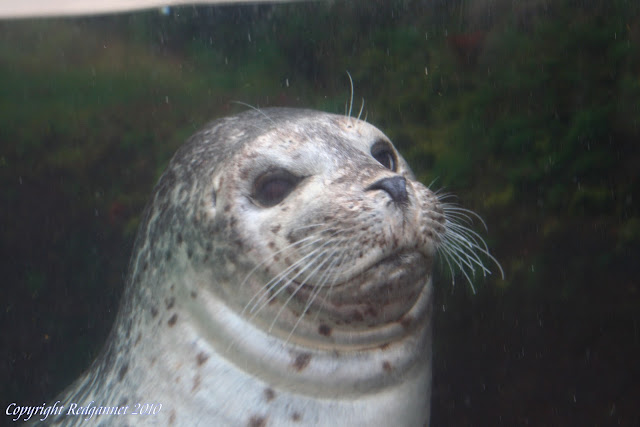 The boat goes from the dock right beside the seal tank. Schedules vary during the season and at weekends. Bookings can be made online or by turning up at the ticket booth beside the dock 30 minutes prior to departure.
The boat boasts a snack bar and toilets with an onboard naturalist and spotters. A small education exhibit is located inside where there is plenty of room to shelter from the worst of any weather.
Bird species; 12

Visit the dedicated page for posts from various locations in USA and Canada
In response to a comment, I wanted to check my claim to have seen a Brown Booby. It would be a very rare event indeed to see one of these in New England waters Richard tells me.
After checking around I must concede that it was far more likely to have been a Northern Gannet. I saw a few of them and the chances that such a rare bird would appear in numbers is most unlikely, but....I am reasonably familiar with gannets and I recall the reason for choosing Brown Booby was the yellow bill and dark cleanly marked breast.
Hmmmm?
I did not realise the status of this bird at the time, so did not pay it any particular attention. I have no photos or notes taken at the time to refer back to, so it would be unrealistic to claim such a rarity.
I should hate to be the cause of birders flocking to Boston Cruises hoping to find a mega-rare bird, when in fact it was a mistake on my part. So, in this case I shall relinquish my claim on the Brown Booby in favour of a juvenile Northern Gannet.
Thanks to Richard for spotting the error.