Come on in. The water's great!

There are some sightings on the Los Angeles River that can be easily predicted, there are consistently large numbers of Black-necked Stilt for example. There are also a few escaped exotics such as Red Bishop, a weaver that usually lives in Southern Africa. But I didn’t expect to see anything quite so exotic as the young lady who skipped naked through the drain in front of me. I will put her on my mammals list; after all she was au naturel. 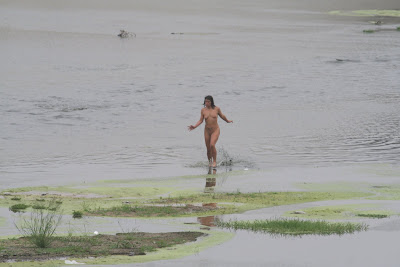 After years of suffering the jocular question from my colleagues,”Will you be looking for the feathered variety of bird?” I can now enigmatically shrug and reply, “Mostly.” 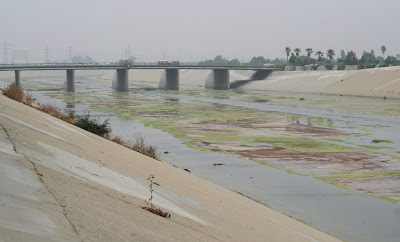 A Metro train takes just 15 minutes from the Transit Mall at Long Beach to reach the Del Amo stop. A 2 minute walk east along Del Amo Avenue, takes you across a small tributary drain, then under the freeway. The Los Angeles River runs on the east side of and parallel to Freeway 710, flowing from north to south. It is a concrete drain for much of it’s length with an uninterrupted cycle path along it’s east bank. There is a path on the west-side, but in-coming drains interrupt it from time to time.
The best viewing is from the east cycle path while moving southwards. This way the sun is over the viewer’s shoulder for most of the morning. The mist and cloud cover made that irrelevant this morning. 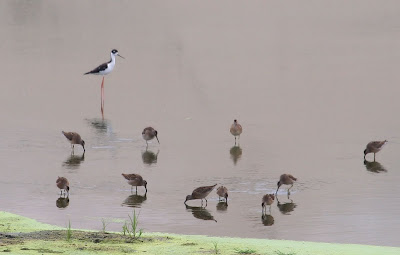 Among the stilt flocks were smaller gatherings of Short-billed Dowitchers, Wilson’s Phalarope and the occasional Greater Yellowlegs. 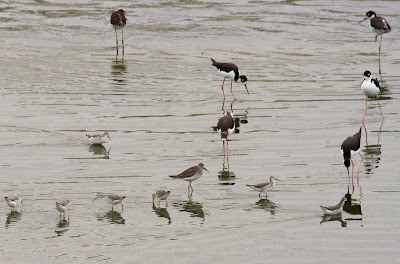 There were a few eclipse ducks, mostly Mallard from what I could see and plenty of House Finches and Bush-tits in the sage and creosote bushes on top of the bank. 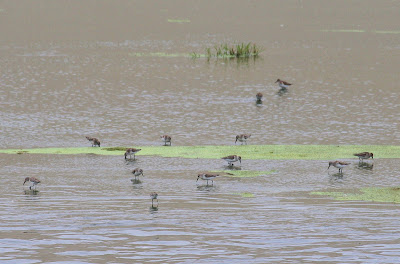 Western Sand pipers are usually well represented, but only in small numbers today.
As I walked, fully dressed, along the cycle path, the stilts would call their alarms and move towards the centre of the drain. When Cally (I named her after the state she was in) ran naked through the drain, they didn’t pay her much attention. So there’s a thought for next time.
Walking downstream, I had the river on my right and a wide ditch to my left. The ditch is known as the Dominguez Gap Conservation Project. It is lined with reeds and rushes and is an attempt to re-create habitat which has been lost. 200 years ago, much of the area around LA was wetland. Since then it has been progressively drained and paved. More than 90% of freshwater habitat is gone forever. The Dominguez Gap is only very small, but is very popular with birds and I surmised, might provide a rich odonata experience. I would come back later to have a look. Among the rushes were other exotic birds. One looked like an African Weaver. I will have to check it out in the appropriate field guide. There was a small flock of Scaly Munia too. 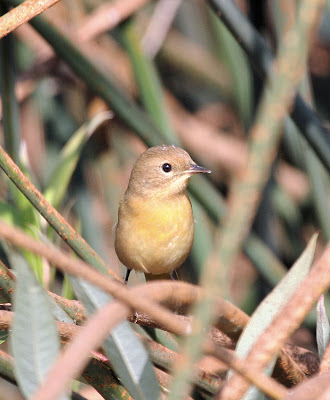 Common Yellowthroats were indeed very common and there were more Bush-tits than you could shake a stick at. 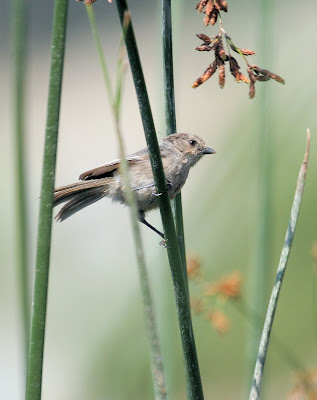 A blue bird popped up out of a sage bush. I am pretty sure it was a Blue Grosbeak. Two young Green Herons waited patiently for their parents among the rushes and Black Phoebes chased insect on the far bank. 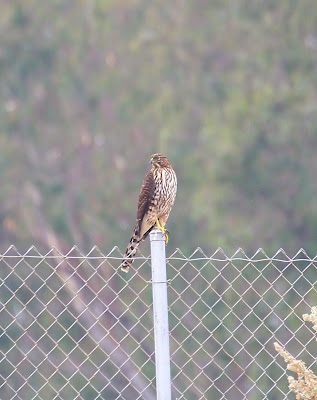 A Cooper’s Hawk perched on a fence and was dive-bombed by Barn Swallows. 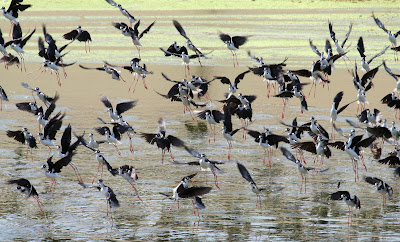 Back in the LA River, a flock of stilt suddenly took flight. A Peregrine Falcon, was hunting along the drain. 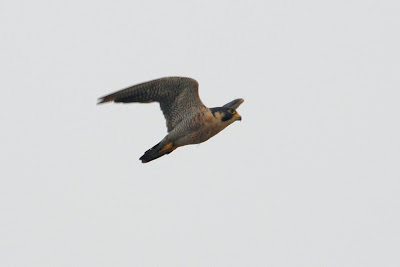 It was unsuccessful on his first attempt and came back over the bridge for another go. It was interesting to see the “birds of a feather” flocking together during the peregrine attack. Western Sandpipers formed a distinct fleeing flock, as did the dowitchers, the phalaropes and the stilts. 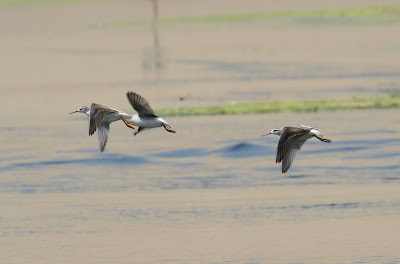 Each flock separated from the others, escaping at different speeds and heights and in different directions, but all eventually landing in the same area and mixing again when the danger had passed.
Other birds of prey seen today were Turkey Vulture, Coopers Hawk, Red-tailed Hawk and American Kestrel. Ospreys are common, but usually found further downstream than I ventured today.
Around mid-morning, the first dragonfly came over the bank between the gap and the river. This was my cue to start exploring the wetland at close quarters. A path running below the cycle track enabled me to do this. The sun was just starting to burn through the clouds and was creeping round to the south, so returning north with the light behind me should have worked better than it did. I managed to overexpose a lot of shots.
8 or 9 different types of odonata were seen today. First was a bright blue darner. I had a good view of him and reckoned I should be able to get an ID from my observations. It was a Blue-eyed Darner. Next, a beautiful darner, reminiscent of our own Emperor Dragonfly. 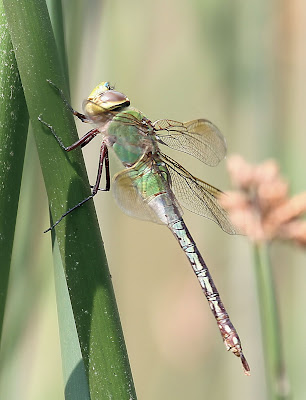 This was the female Common Green Darner. Perched just beyond her was a third darner-type which I am struggling to identify.
There were dozens of dragonflies on the bank among the sage and creosote bushes, but I couldn’t get sufficient detail on them, but I suspect that they were the same as the one below which sat quietly, sunbathing. 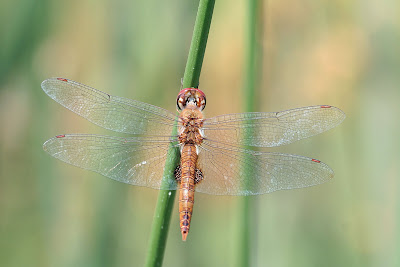 There were females and males of the Spot-wing Glider. At last, having seen 15 or 20 of the Blue-eyed Darners, I found one sitting and was able to capture a record shot of it. The Blue Dasher was also very common. 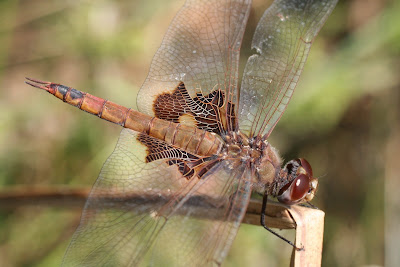 This one is a Red Saddlebags. I was able to approach so near that the 50mm macro couldn’t focus closely enough. I was even able to hold the tip of the reed to keep it from blowing in the wind. That’s the answer my friend! A damselfly stopped nearby and while I had the macro fitted, I tried to get some shots of this blue-tail look-a-like. I assume the light-headed one to be a female.
By now, the sun had won the day and was shining brightly. 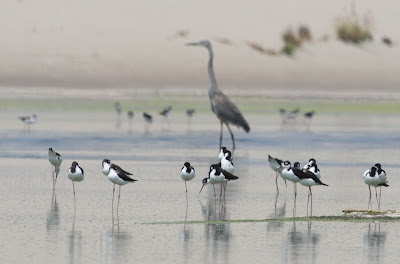 Since this is supposed to be a bird blog, I returned to the river to try to get some better lit photos for my reader. The stilts were clustered very close together in the same way they had after the peregrine attack. 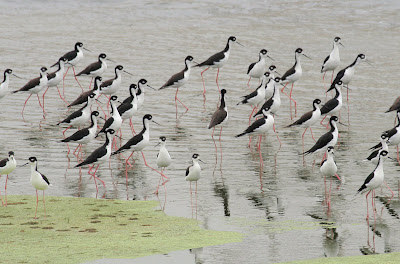 They had dispersed quickly then, but now they were remaining tightly packed. Perhaps the falcon was perched on the bridge out of my vision. The birds looked jumpy and took flight when a helicopter flew over.
Some bank-side vegetation was harbouring some damselflies. An ovipositing pair had settled on the other side of a stalk where I couldn’t see them. My only option for a photograph was to wade in. The water was surprisingly warm, but I drew the line at my shoes and socks. The water was clear, but I was not sure about it’s provenance. Although the drain is concrete lined, there were some patches which were, let’s say, sedimenty.
The dragonflies were abundant now with many of the Common Green Darners coupled-up and laying eggs. As I watched one pair, engrossed in the process of continuing their line, a coot sidled up and ate them!
I recognised a Mexican Amberwing from the trip to Arizona, where I had also seen the Blue Dasher previously. 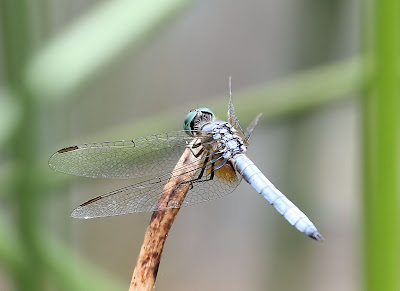 The final ode caused me some ID problems. It was beyond the capabilities that I could reasonably expect from the 400mm and even though I got a decent look at it through binoculars, my notes didn’t tally with anything I could find on the web, until I found the Flame Skimmer. 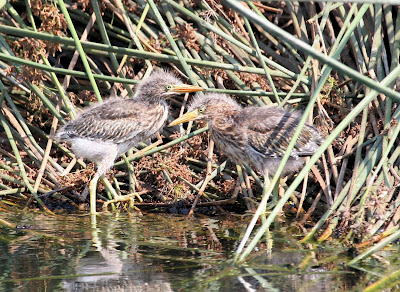 The young herons had become impatient with their parents and were engagingly trying their luck with at least one success each while I watched. Also among the rushes and reeds with the marauding coots were Black-crowned Night Heron, Snowy Egret, Great Blue Heron and Pied-billed Grebe.
I had returned to where I had started, so retraced my steps towards Del Amo Metro station. Cally had disappeared, much to the disappointment of some young boys who had got more than they bargained for during their cycle ride. They had been cruising up and down all morning trying to find her again.

Tuesday 18th Aug
The next morning was dull and misty again. It is the norm for the season I’m told. Cloud and mist first thing, burning off by midday. It was time to go home shortly after midday, so I took a quick walk on the Long Beach harbour front and by the mouth of the LA River as it flows into the ocean. 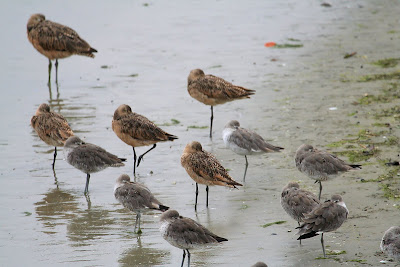 I started from Golden Shore Marine Biological Reserve. This is a reliable spot to find Willet and Marbled Godwit. Note the bigger bulkier Long-billed Curlew in the background. 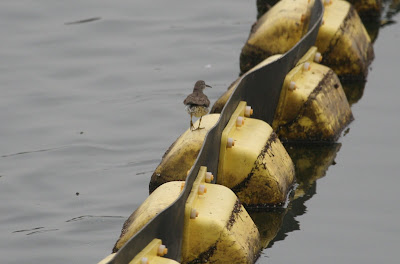 A spotted Sandpiper sat on the barrage across the entrance. 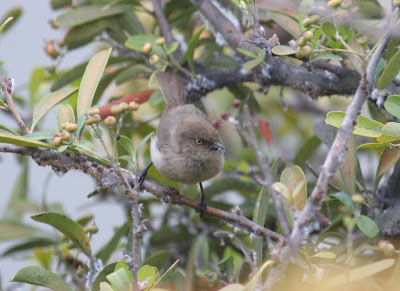 A party of Bush-tits was enhanced briefly by a Wilson’s Warbler as they made their way through the low bushes of the car park. 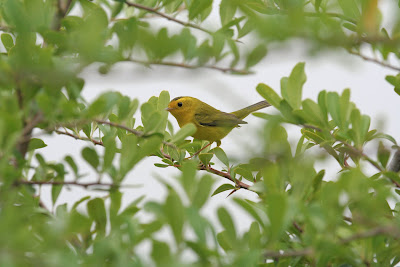 Out on the main river, some Western/Clark’s Grebes were floating upstream with the tide as a Brown Pelican flew overhead. Further up on a larger barrage sat approx 300 Ring-billed Gulls.
As I passed under the last bridge before the ocean, I could see the Queen Mary across the harbour. Between she and I were Double-crested Cormorants, Western and Heerman’s Gulls out on the water. 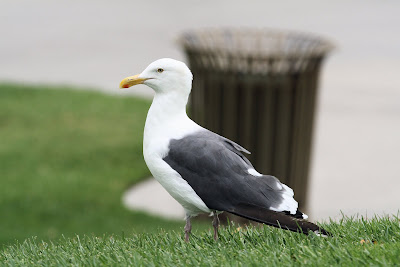 A Western Gull on the grass sat for a photo, but the Heerman’s never came close enough.