In anticipation of the route moving to a short-haul agreement, we have moved hotels in Tel Aviv and I needed to start my plans from scratch. Only once we had arrived at the hotel could we pin ourselves on a map and found that we were approximately 2.75 kms from the beach. The hotel provides a scheduled shuttle-bus which runs every 2 hours, but my beach-bound colleague wanted to get there before the sun went down, so we walked.
If I hadn’t wanted to count these birds on my 10,000 Birds Year List, I could have suggested a cab which might have run to about 60 Shekels. As it was the walk took around 45 minutes, the bus beat us there and I only got to add one bird to the list. I wanted to take a look at a couple of green patches close to the shoreline, but the sun was already very low in the sky. Hooded Crows were coming in to roost on the aerials of the British Embassy and on the Dr Seuss house nearby.

In Spiegel Park (opposite at Google Earth ref; 32° 5'18.35"N 34°46'13.13"E), a White-throated Kingfisher flew over my head as I watched some Eurasian Hoopoes. It was really too dark to take proper pictures, so I amused myself trying to take pictures of the bats. The moon was showing its second full face of the month and warranted a picture as the celebrated 'Blue Moon'. Against the odds, this was also my second full moon of the day as I had seen it setting that morning as I drove to the airport for an early check in. I was lining up a shot when I heard an eldritch shriek. I am not familiar enough with the cry of the European Thick-knee to be able to imitate it from memory, but when you hear a weird ghostly call in the night, you are unlikely to mistake it for anything else. It was completely dark now, but I decided to follow the cries and shortly came across a lawn with a street lamp on the far side, about 50 meters away. By crouching down, I was able to see two silhouettes of the Thick-knees against the light. The photo, I am sure you will agree, is hardly worth publishing, but I got covered in dog mess and grass stains to get it so you are going to see it whether you want to or not. 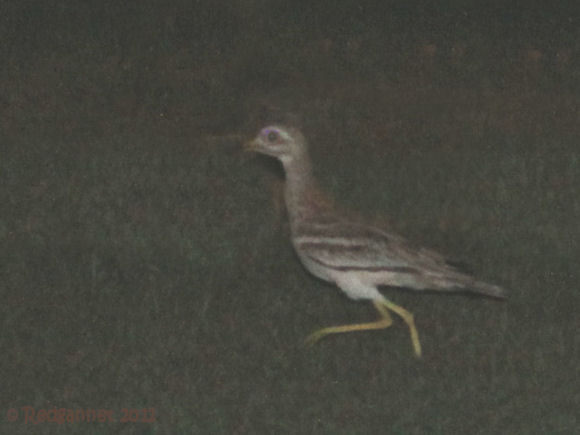