The Metro whisked me along beneath the snarled traffic that was already choking Mexico City. I was on the Green Line, heading towards Universidad. At 06.30 there was standing room only on the subway train. Whoever heard of students getting up to get to lectures at that time of the morning? 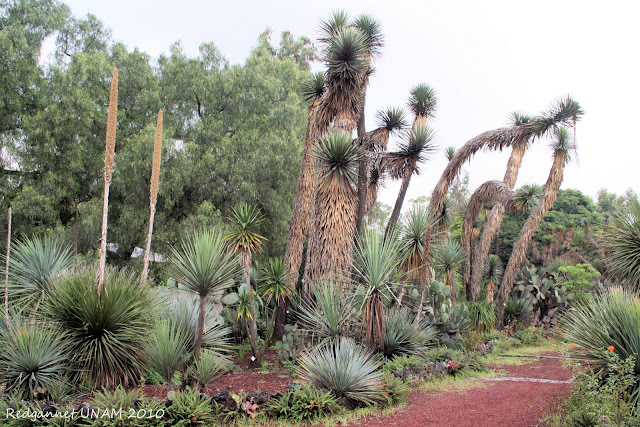 A short taxi ride took me to the barrier at the UNAM (Universidad Nacional Autonoma de Mexico) Jardin Botanico. Beyond the barrier, on the approach road to the gardens proper, is a line of bushes and a stand of alien trees. Here there were Wilson’s Warbler, Bullocks Oriole, Buff-breasted Flycatcher and Grey Silky Flycatcher. 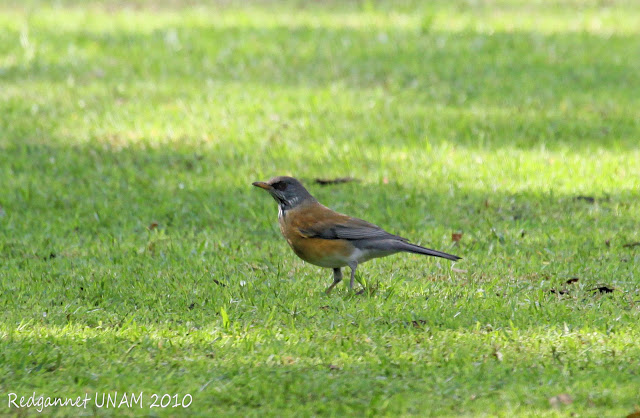 On a small lawn opposite, a Rufous-backed Thrush and the first of the day’s Canyon Towhees picked through the grass.
As I passed through the gate, I was called back by the security guard and told that I needed a permit for the camera. The officer to whom I applied was not yet at her desk, so I relinquished my tripod and promised not to use the camera until I could get a piece of paper granting me permission to do so (see Mexico gripes above).
Silky Flycatchers were very common and were rivalling the House Finches and Canyon Towhees for numerical supremacy. 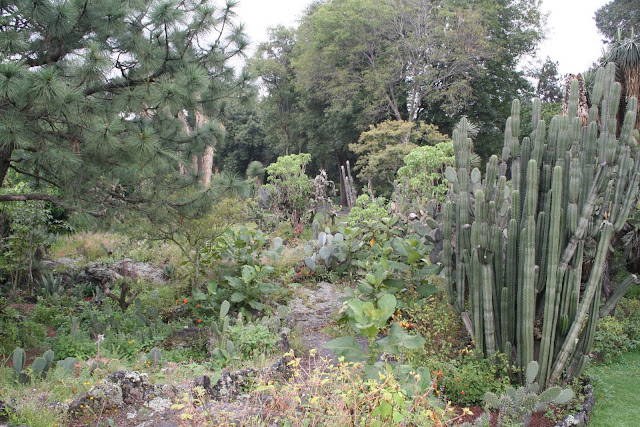 In the arid section (which was, incidentally, looking very lush) Wilson’s Warblers were picking through some low trees and I got a fleeting glimpse of a Black-throated Grey Warbler. Northern Cardinal, Curve-billed Thrasher and Broad-billed Hummingbird all looked very much at home here.
A Blue-grey Gnatcatcher made me dive for the field guide. Once again Steve and Sophie had anticipated problem areas and included illustrations of the potential gnatcatchers. It had shown very well and was easy enough to identify as the common North American species.
At 09.30 I returned to the office on the left of the approach road to obtain my permit. This was a simple process made difficult by my lack of Spanish and I would like to thank Guadeloupe for her assistance and for looking after my tripod which I was now allowed to use.A Western Peewee waited for me outside the office. 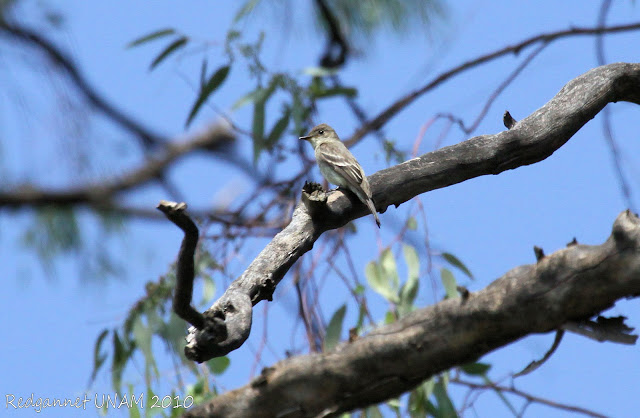 I went back over some old ground to find a few photographs to set the scene before heading along the main road towards the top of the gardens. There were more Wilson’s Warblers along the way and a small flock of bandito-looking Bushtits. 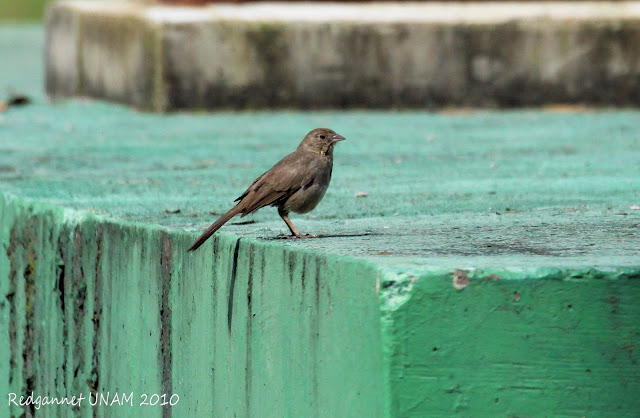 An open area of grass on the right was busy with thrushes, thrashers and towhees. I had never noticed the glaring red eye on an Inca Dove before. How did I miss that?
In the large trees across the lawn a Western Peewee and some silkies hawked for insects from high exposed branches. 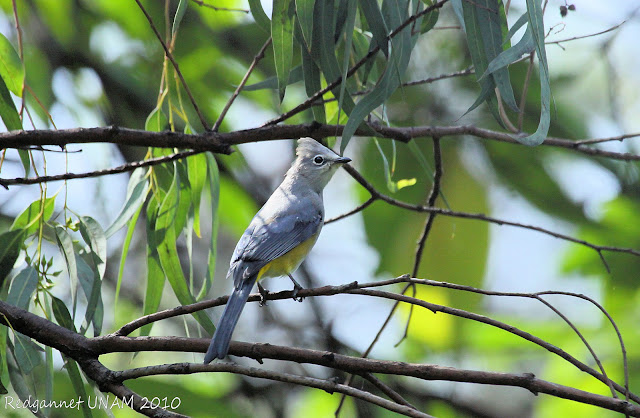 From the top of the gardens, I turned left across the event lawn which was hosting a reception with tablecloths and little sandwiches. The reception meant restricted access to people with big cameras, permit or no permit, so I had to sneak along the maintenance track into the large area of comparatively unmanaged scrubland beyond. 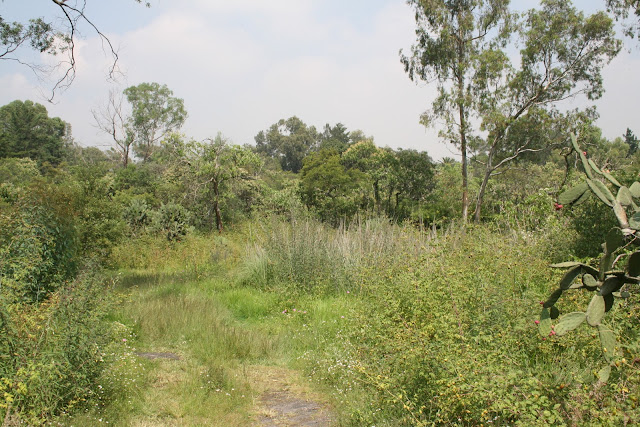 There were plenty of birds here with nearly all of those already mentioned plus a Blue Grosbeak and some Chipping Sparrows. 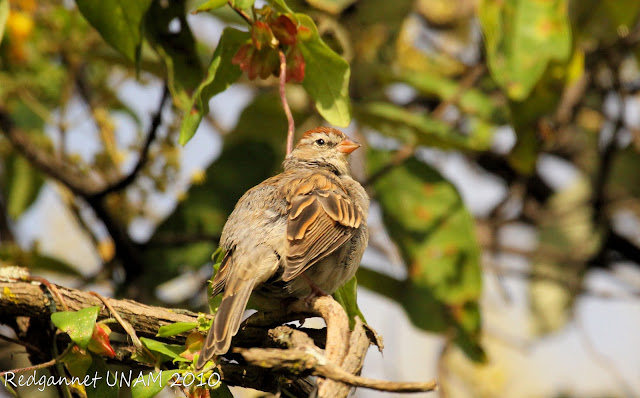 I was hoping that I might come across a snake in this area and nearly wet myself when I almost trod on this little fella! It is known (to the lady with the clipboard at least) as a Cincuante; a common, non-venomous snake. Sadly, for him especially, he was dead and I picked him up with a stick and posed the photograph. 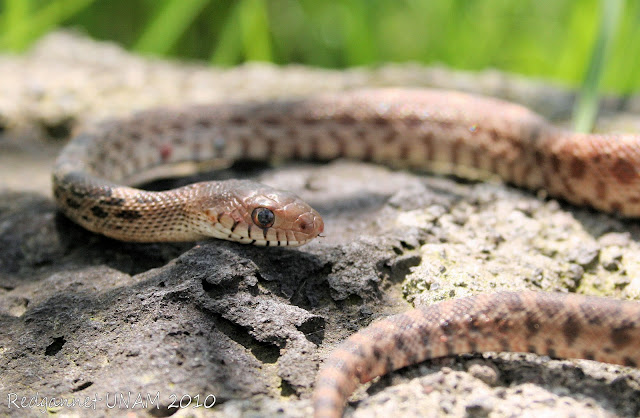 Once you get your eye in for the Berylline Hummingbird, they are quite easy to identify even when back-lit. The rufous panel in the wing shows through and makes identification straight forward. Mexico City is beyond the distribution range for any of the other potential candidates and I can’t understand why I have never managed to put one on my list before. 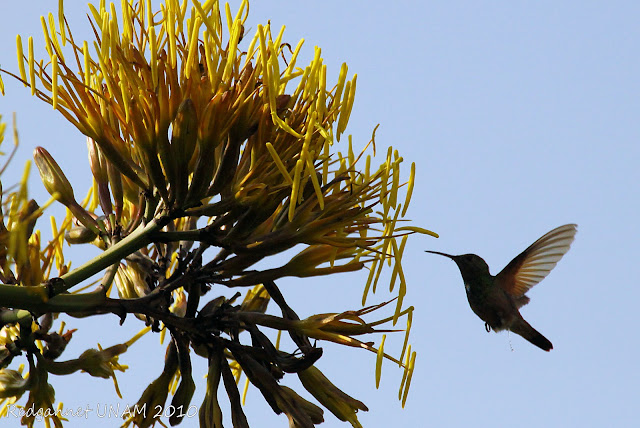 The heat of the day usually means insects and my attention was drawn by this rather dashing hopper. 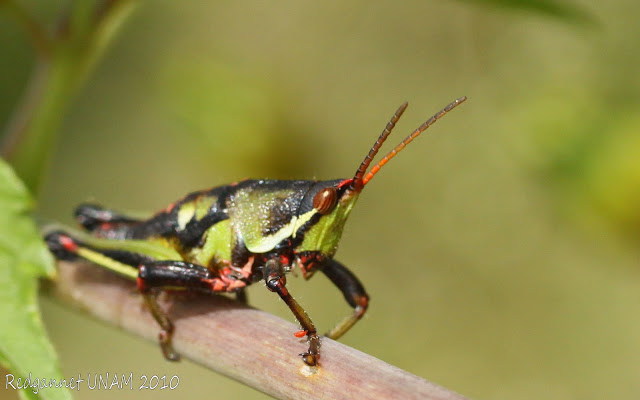 This was followed by a couple of beautiful butterflies and before you know it, I was heading to water, pulled by the urge to spot a few dragonflies.
The ponds, ironically, are in the dry area and the odonata were very obvious. I believe this one to be a Variegated 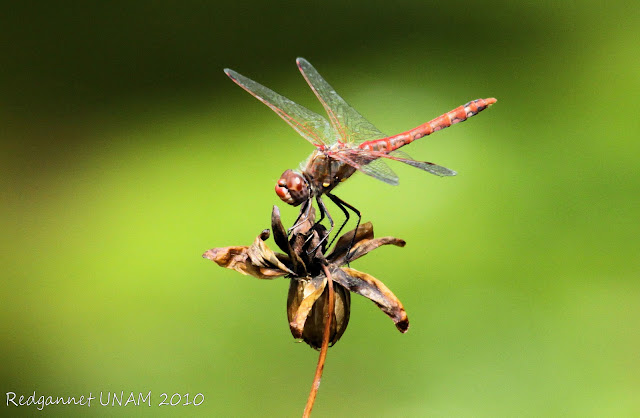 The Blue-faced Darner and Roseate Skimmers that I had seen yesterday were here as well as a new one for the red crayon. It will need confirmation, but I think that it may be a Pin-tailed Pondhawk, Erythemis plebeja. 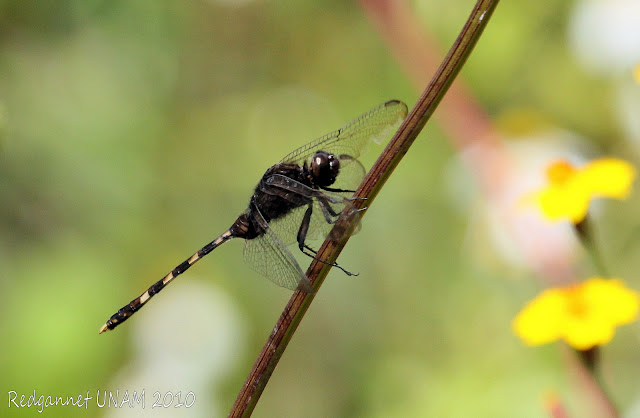 Of all the insects, I am keeping track of dragonflies. To list any of the others, would be such a gargantuan task that I leave it to those who passion lays along those particular branches of the entomological tree.
Barn Swallows were swooping down to take sips of water from the larger of the pools. Potentially this could make a splendid photograph, but instead I learned a lesson which should have been obvious really. 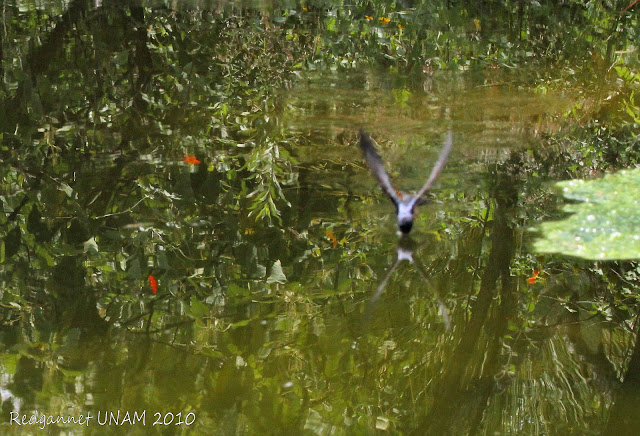 I decided not to use Servo Focus as my target bird was too small and moving too fast to get right in the cross hairs. They were skimming across my field of view, not straight at me, so I didn’t think that Servo Focus was the way to go. Instead, I identified a spot where the swallows swooped most regularly and set up a camera trap there. It was not a technologically advanced trap; I put the camera on the tripod and aimed it at a patch of water between two clumps of floating weed. I used the auto mode to gain focus on the water’s surface and then switched to manual. The trigger device was me, using the remote release on high frame rate, hoping to catch the exact moment of scoop as the bird passed through the hit-zone. 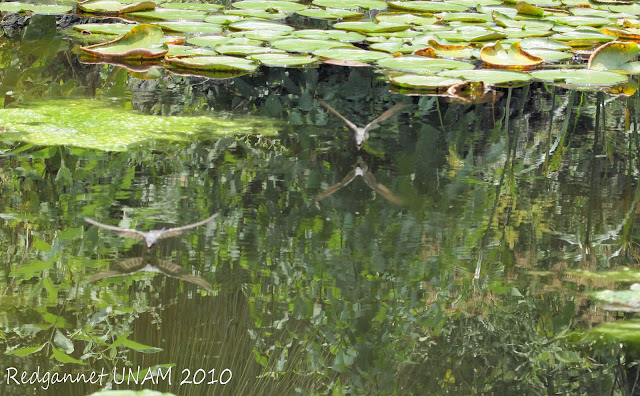 I took lots of pictures, but they were all hideously out of focus. I tried again and again until I realised my mistake. I had focussed on the reflections on the water, but that is not the actual surface that the swallows were scooping from.
The reflection’s focus is equidistant beneath the water’s surface as the object is above it (of course it is!).
Did I explain that well?
A simple experiment in the hotel bathroom mirror confirmed my theory and will demonstrate the effect much better than I can describe it. 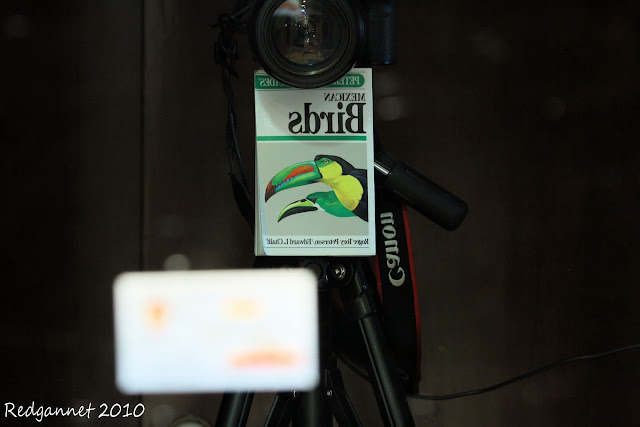 If I take a picture of a reflection (the Peterson field guide), the focus point is not at the surface of the reflecting medium (shown by the taxi card stuck to the mirror), but the same distance beyond the mirror's surface as the book is this side of it. Therefore any subject, such as ...oooh let's say a swallow for example, or in this case, the taxi card, is out of focus. 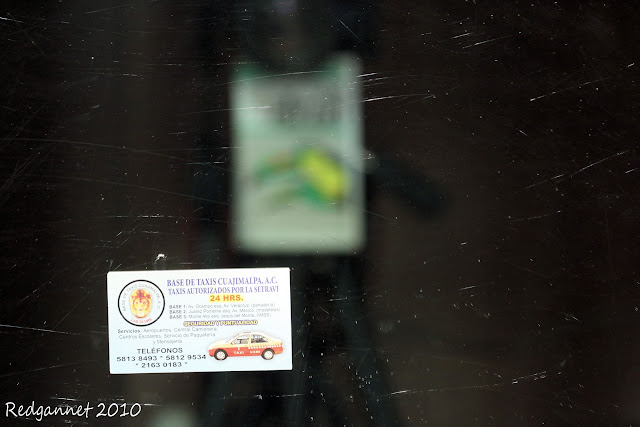 What a scratchy mirror.
If I had wanted to get a sharp picture of anything at the surface of the water, I should have focussed on the mats of floating weed.
Still I spent 30 minutes in the sunshine by a pool, watching swooping swallows and darting dragonflies. How was I to know I wasn’t having fun?
I hoped to find a field guide in the garden’s gift shop to help me identify the snake. While I was there, I was caught by the camera permit lady with a clipboard and more formalities for the use of my photographs. Thus UNAM in the copyright caption indicates that the pictures were taken at UNAM Jardin Botanico and that they retain rights to their use. In fairness to the lady, she was not officious or difficult about the pictures. It is an insistence from on high and she did provide me with a local name for the snake.
Bird species; 25