The water from Sydney Harbour flushes in and out with each tide, passing through The Heads and mixing with the Pacific Ocean.
Looking from North Head across the harbour inlet is South Head and beyond that, the city of Sydney. 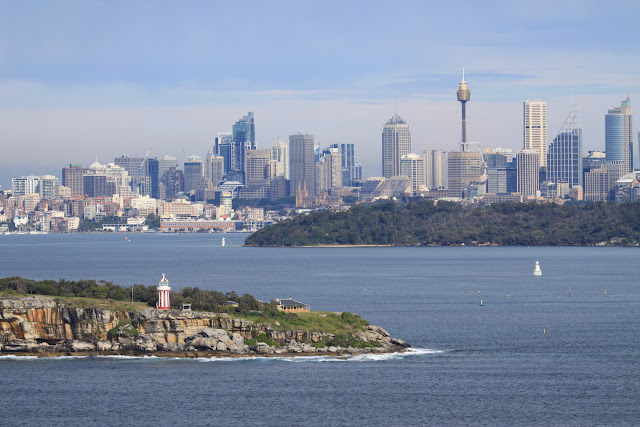 Sydney National Park is made up of fragments of coastal scrub, forest, cliff and beach. I had come to this part hoping to see whales, albatrosses and Little Penguins.
The bus dropped me off at the approach road to the Quarantine Station. From here, I walked into the preserve with my binoculars at the ready.
A Brush Wattlebird was first to pop its head up to be spotted. I could hear the Eastern Whipbird calling with its slow build up and emphatic finish.
The Pied Currawong also has a distinctive voice which is easy to recognize and the in-flight pattern of black and white is a reliable ID feature. 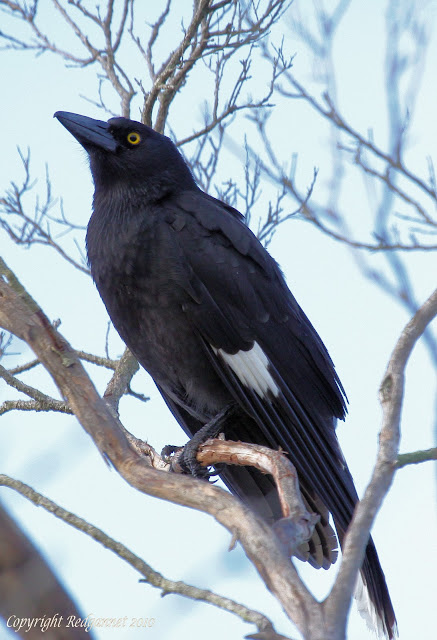 The most common bird in the brush either side of the road was the New England Honeyeater. They squeaked as they flew and chased each other around in what looked like fun, but probably had a more serious side with the southern summer approaching. 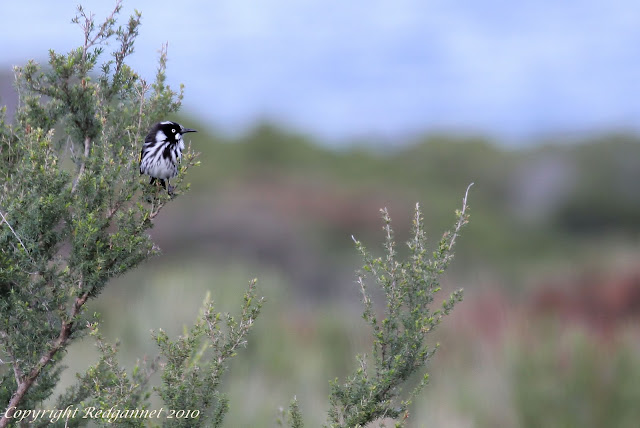 About 500m along the road, opposite the military museum, the right side of the road opens out and the observer is rewarded with a view of the harbour with Sydney in the distance.
The road ends in a circular drive with Fairfax Walk looping from it along the cliff top. 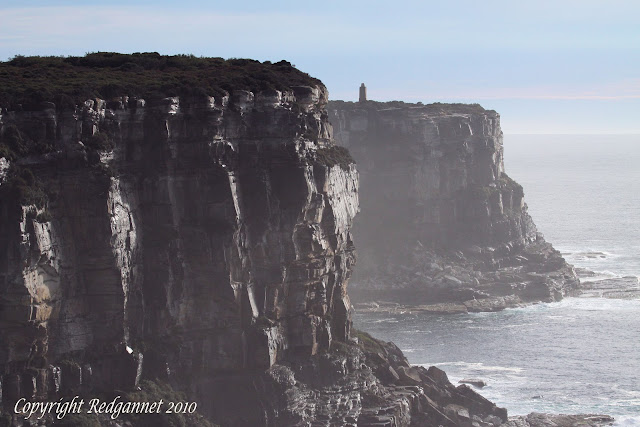 Looking east I could see nothing but ocean, but a puff of spume betrayed the presence of a whale. Another blow beside the first, then a few more further out showed that perhaps 8 or 10 whales were feeding close to shore.
The whale migration involves mostly Humpbacked Whales with lesser numbers of Southern Right Whales moving north during May and July, returning towards Antarctic from August.
The cliff top walk affords stunning views of Sydney as well as enabling the sea-watcher to gain an elevated vantage point with a huge expanse of ocean to watch. 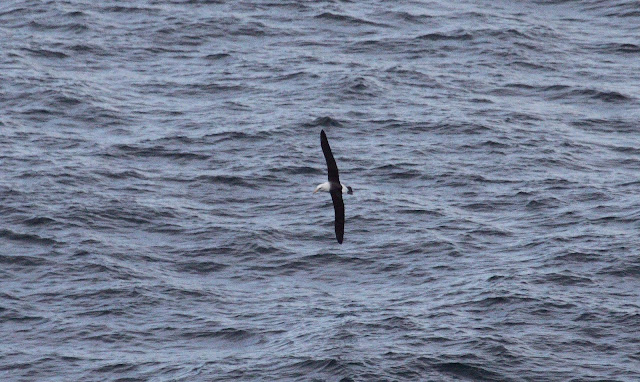 To my naked eye, there was nothing to be seen, but a scan with the binoculars revealed the outline of a Black-browed Albatross as it wheeled and glided on stiff wings. One stopped to look at something in the water while another younger bird approached and chased the first one away. Note the younger one has a dark, not yellow bill. 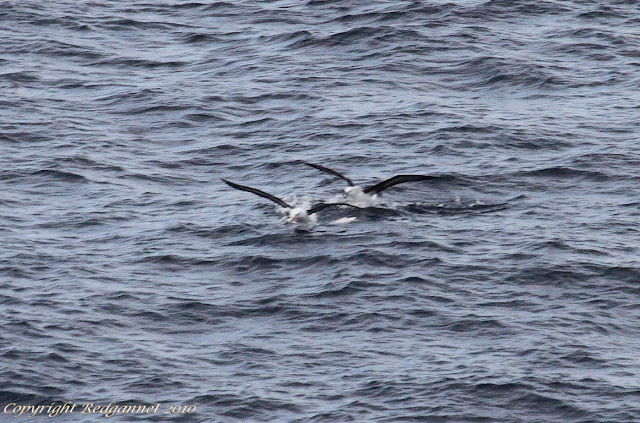 A flock of some 300 Silver Gulls drifted beyond the wave line at the base of the cliff. They were more restrained than when I usually see them outside McDonald’s at Circular Quay. 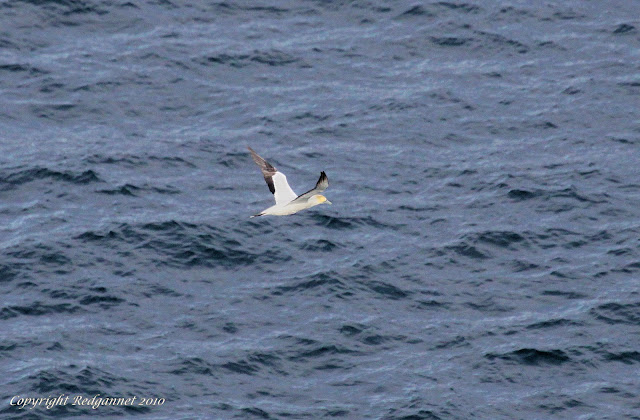 A single Australian Gannet passed below me, heading towards the city and some shearwaters surfed the wave fronts but were too distant to identify reliably. 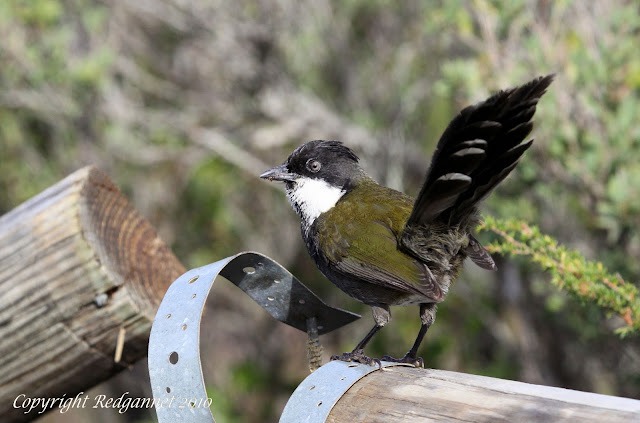 Back in the bush the Eastern Whipbirds were raising a big noise with the female replying instantaneously following the male’s “ooooo ee WHIP”. 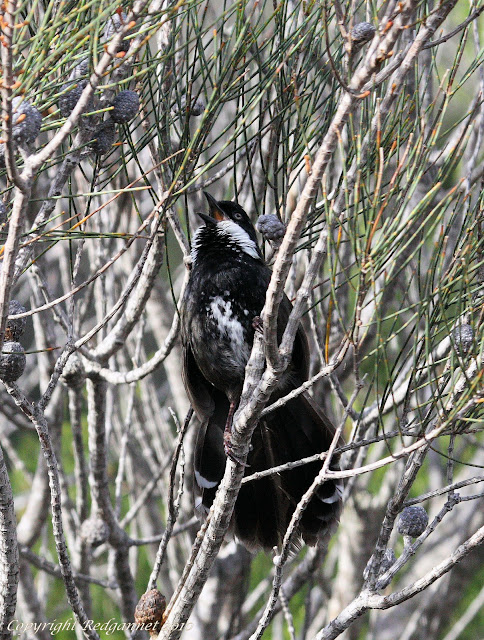 I was able to mimic part of the call and one of the birds came up onto the rail to have a look. The female preferred to respond from cover. 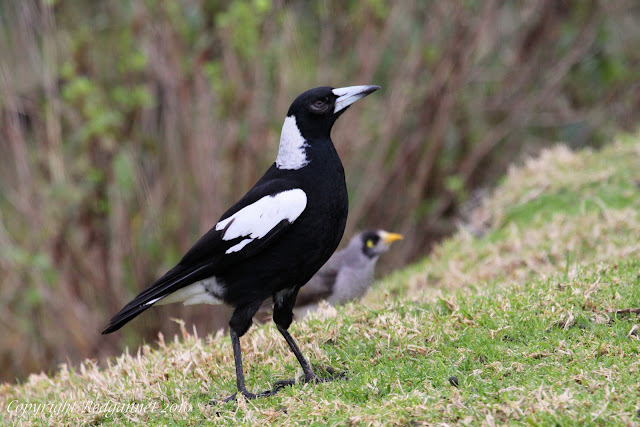 An Australian (black-backed) Magpie with some damage or infection on its right eye was being escorted by two Noisy Miners. 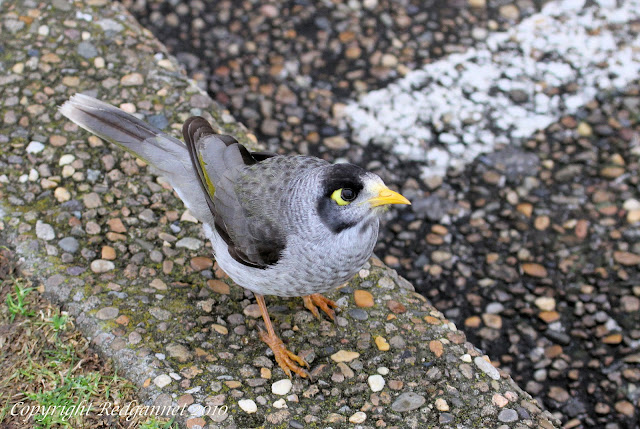 The miners were very confiding but left  me in order to follow the magpie as soon as it flew off.
A flock of Silvereye in the dead branches at the top of a spindly tree came down to feed in a fruiting tree. Some of them fed on the ground beneath the tree on fallen berries. 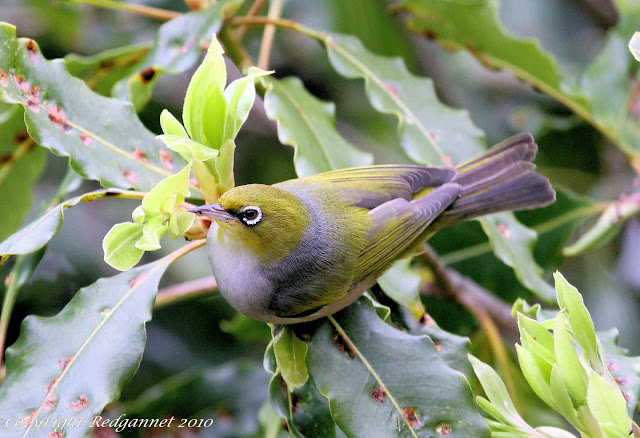 Given more time, I would have liked to explore some nearby beaches to find a good location for a stakeout. A few pairs of little Penguins breed near Manly. But are only likely to be seen at dusk when they return to their burrows. There are a few scattered burrows very close to Manly Wharf where the ferries from Sydney dock. It would almost be possible to watch for the penguins from the café on the pier.
I wanted to know if they still returned to the burrow each night outside of the breeding season and whether it would be worth hanging around on a cold, wet, late July evening (my only chance, last night, was washed out so my curiosity was in preparation for my next trip).
A local told me that he had seen some people waiting for the penguins one evening during the previous week. He couldn’t say whether they had seen any penguins, so the question remains open if anyone has any thoughts.
The penguins are protected and security is put in place each evening to ensure that they are able to return from the water to their burrows without being intimidated. It is important to keep a good distance from the water’s edge and the burrow and not to encroach on their passage from the water. They are sensitive to flash photography, so I am unlikely to get any shots to grace these posts, but they are delightful little characters and well worth laying the camera aside for a few moments to watch.
For other redgannet posts about Sydney follow the links below;
http://redgannet.blogspot.com/2009/05/plover-or-dotterel.html
http://redgannet.blogspot.com/2009/05/cockatoos-at-dusk.html
Bird species; 21


Also seen in a wet and miserable Sydney Botanical Gardens and bringing the running total to 27 were;

Having read the post, you may now be interested to witness a neurotic breakdown.
The provenance of the albatross is in question. My colleague, birdie buddy and self-appointed proof reader, GL, has pointed out that the hitherto forms of  the Black-browed Albatross have been split and awarded full species status. The original Black-browed Albatross retains the latin binomial, Thalassarche melanophris while the new Campbell Island Albatross goes by the olde Thalassarche (melanophris) impavida.

Before the split, they were known as Dark-eyed and Light-eyed forms respectively with the (then)T.m. impavida form sporting a honey coloured iris. Though.... the light-eyed form wears more black in the brow, giving the appearance of a darker eye. Looking for iris colour from any distance is strictly for the professionals.
Perhaps a better field mark from range is the underwing pattern. My guides indicate a bird with a solid block of white within a black margin under the wings to be the Black-browed Albatross. One with a broken white pattern with streaks on the axillaries and at the base of the primaries would be the Campbell Island Albatross. The individual above appears to have an underwing consistent with T.impavida, yet the black in the brow is restricted and the distance is too great to see any colour detail of the iris. 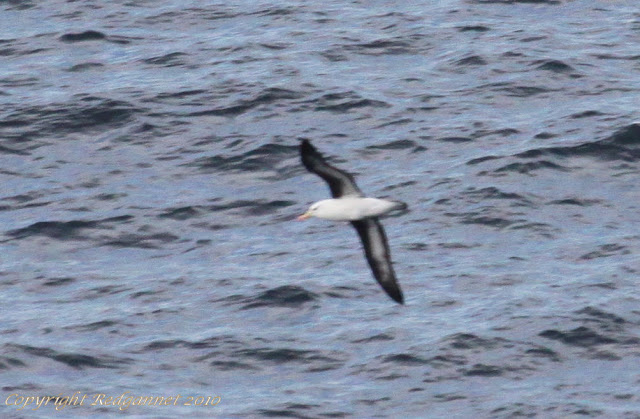 Except for the young bully, all the pictures are of the same individual.

Take a look at this photo and the one from the post. Note the black of the back melts into the white on the neck. My guide shows a definite demarcation between the black and white in the T. melanophris 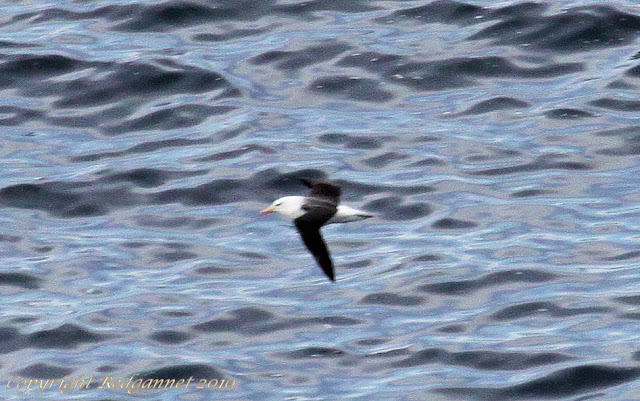 The Black-browed Albatross ranges across the Southern Ocean from the tip of South America to the Antipodes, Very occasionally one will stray north; as far as the Outer Hebrides in 2007.
The Campbell Island Albatross is more restricted in its range. It occurs from the Campbell Islands, and adjacent islands off the Southern tip of New Zealand and is fairly common in the waters of the Australian states of SA, Vic, NSW and Tas.
I have trawled through pictures on the internet of both types and I am struggling to come to a decision. The  honey coloured iris does not stand out until the bird comes very close. The broken underwing pattern is present on many of the photos titled "Black-browed", but many authors (who must have missed this taxanomic event, as I did) are still using the species and form, ie "Black-browed Albatross, Campbell Islands race"
To add to the dilemma, the IUCN notes the Black-browed on its Red List, but recognises a breeding population on Campbell Island.

So where does that leave us?
On balance, I am going to stick with my first impression that it is a Black-browed Albatross. The underwing pattern is not conclusive and indeed looks as if it could be half way between the two. The black brow is not so extensive to make me change to Campbell Island and even in super-duper full pge pixels, I can find no evidence of the honey-coloured iris.
If anyone with an experienced eye for this sort of thing would like to offer any help on this, both G and I would be pleased to hear from you.
Posted by Redganet at 00:31