Parque Ecológico do Tietê and a whole day were at my whim. A nagging feeling about my personal safety was the only thing that prevented me from actually skipping (that and the tripod-mounted camera). It is difficult to be discrete with a big lens and throughout the day I kept wondering whether it was worth carrying all my gear and making a potential target of myself. Seeing the results of my photographic endeavours, the answer must be a resounding “No!” 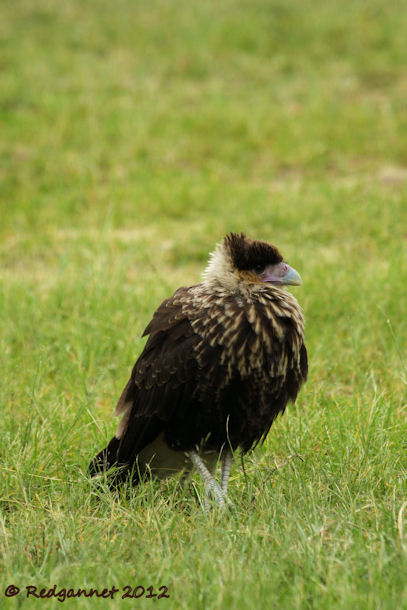 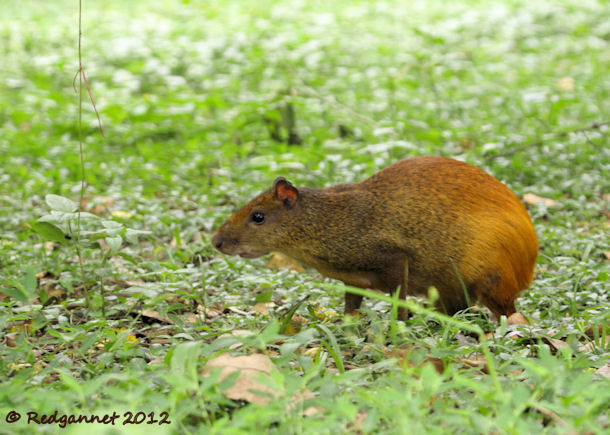 Agoutis, Coatis and Black Cappucchin Monkeys were found just behind the museum. At the forest edge, House Wren, Creamy-bellied Thrush and Crested Cardinal were quickly noted. On the ground, a pair of Masked Water Tyrants were collecting nesting materials and appeared to have chosen a spot to build in an bush overhanging the water. 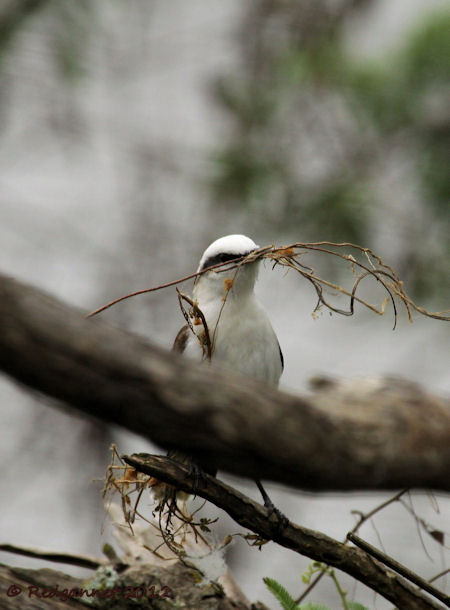 Yellow-chinned Spinetails were further along with their project, but the materials they were using were much more rigid. The nest has a characteristic pattern and the birds use consistently sized twigs in its construction. 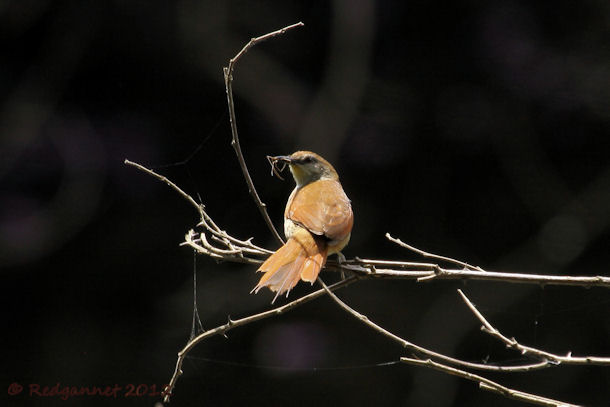 An emergent dead tree was popular with flycatchers. The distinctive silhouette of a Fork-tailed Flycatcher was easy, but a couple of other birds took a bit of looking at in the poor light. One was an Epaulet Oriole, another proved to be a Tropical Kingbird.
I recalled that a line of Bottlebrush Trees had been in flower on my previous visit (August 2009) and had been seething with Bananaquits and Swallow-tailed Hummingbirds. Without the blossoms, they were far fewer and further between. 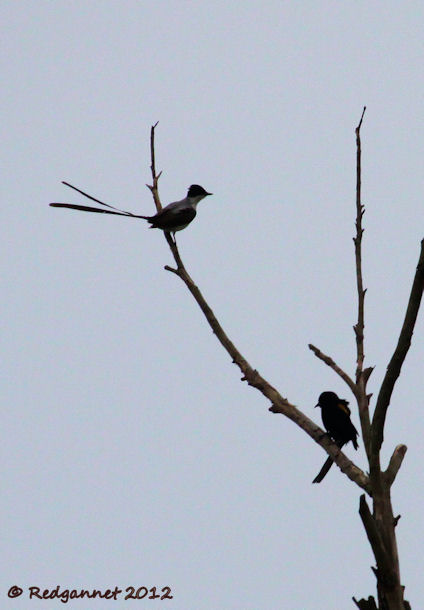 Beyond the boating lake is an area of playing fields, mostly football pitches. Southern Lapwings were plentiful here and were joined in lesser numbers by Southern Caracara, Cattle Tyrants, Ruddy Ground-doves and a few Masked Water Tyrants. The trees between the pitches held another Fork-tailed Flycatcher and Tropical Kingbird. A small browny-yellowy-greyy, finchy bird, managed to evade identification. 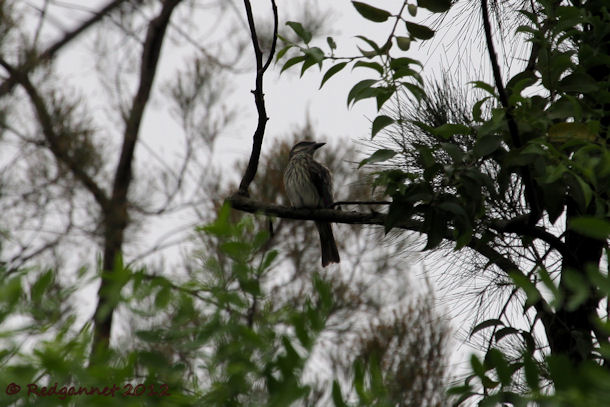 The furthest pitch had lights and a small stand of concrete seating. It looked as if it doubled as a running track. The woods at the top end turned out to be another hot-spot. My first lifer of the day came in the shape of a Variegated Flycatcher. Campo Flicker, Smooth-billed Ani, House Wren Rufous-bellied Thrush and Orange-headed Tanager were also seen. 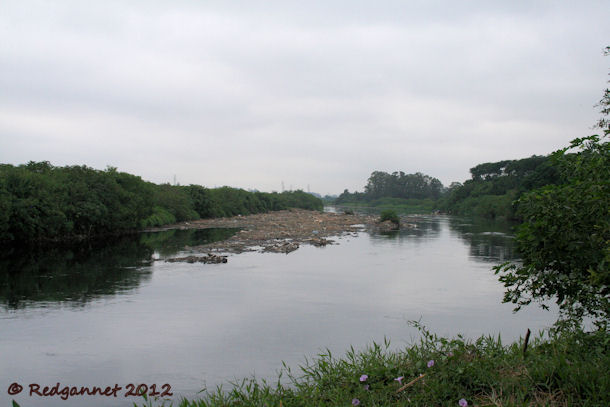 From here, it is possible to cut through to the marshy edges of the river. I was disappointed to see that the grass had grown high and that it was difficult to make out anything at all. I moved along the road a short distance to the left and found an opening onto the Rio Tietê. Common Gallinules, Picazuro Pigeons and Southern Lapwings could be seen upstream on a bank of mud and detritus. 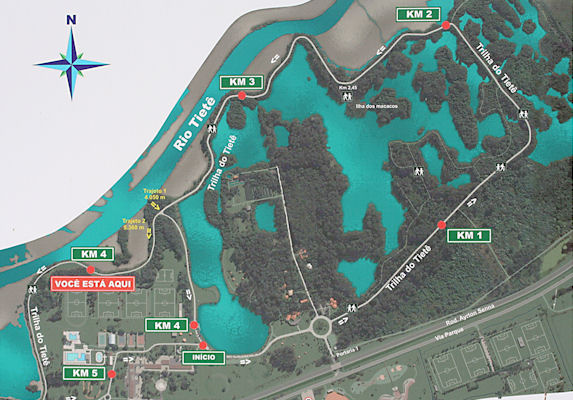 There are maps along the path that describe the circular route. They also recommend that an anti-clockwise direction is followed. I had started out going the wrong way and took the decision to continue.  A few joggers, walkers and cyclists were conforming, but the park was quiet. Mostly patrons were lone joggers with a few family groups or couples. None of them looked as if they would be a threat, but since I was going against the flow, I was able to size them up as they approached and no-one was following me from behind. 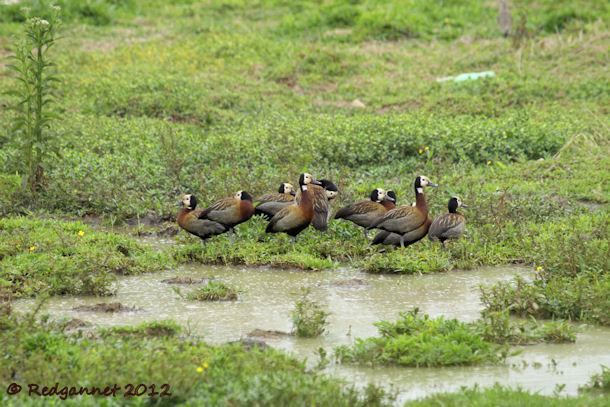 I had been disappointed not to be able to see anything in the marsh, but a patch opened out as I reached the intersection at 3.5kms (Google Earth ref; 23°29'23.22"S 46°31'31.25"W). White-faced Whistling Duck, Rufous Whistling Duck, Brazilian Teal, Wattled Jacana and plenty of Common Gallinule were easy to see here. Closer inspection brought Smooth-billed Ani in the higher vegetation behind and Ruddy Ground-doves on bare patches. 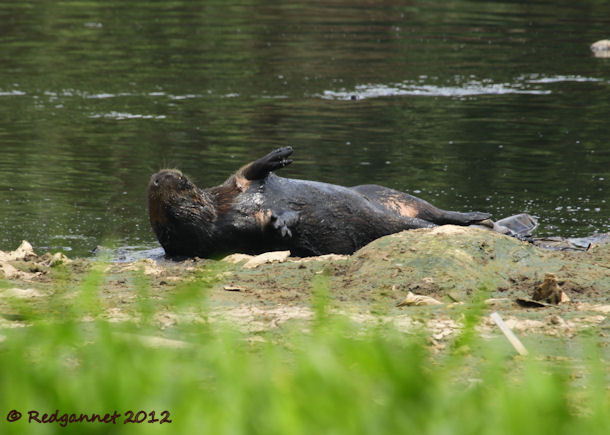 Passerines could still be found in the trees and bushes lining the road. Greater Kiskadee and Yellow-chinned Spinetail were especially common along this stretch. An opening to the river revealed a family of Capybaras wallowing and sunbathing on a mudbank. A couple of youngsters were playing in the filthy water. 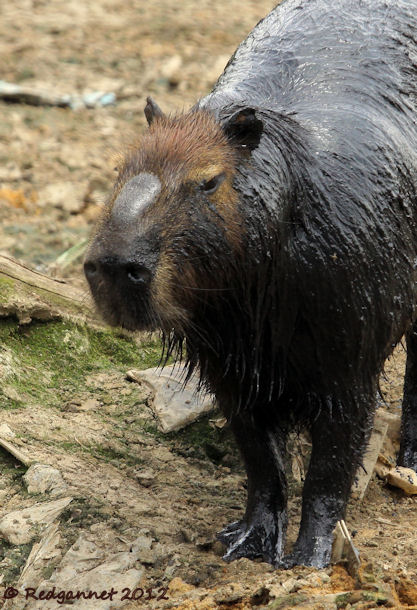 One looked as if he was suffering from a gunshot wound, but he was still keen to chase a flirty female until she sought out a more senior male and he chased off the wounded animal. As he watched the smaller male retreat, the master of the mud-bank clicked his teeth together as a parting gesture. A startling red and black Brazilian Tanager flew through as I watched. 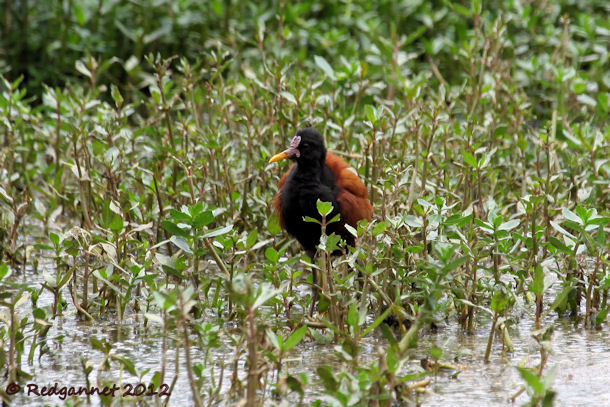 Another open patch of marsh was found at the 2.5km mark as the road bends sharply. A Wattled Jacana came close. A loose gathering of dull-legged Lesser Yellowlegs fed with a side-swiping action that I had not noticed before, but I am reasonably confident of the ID. Masked Water Tyrants were common in this area. 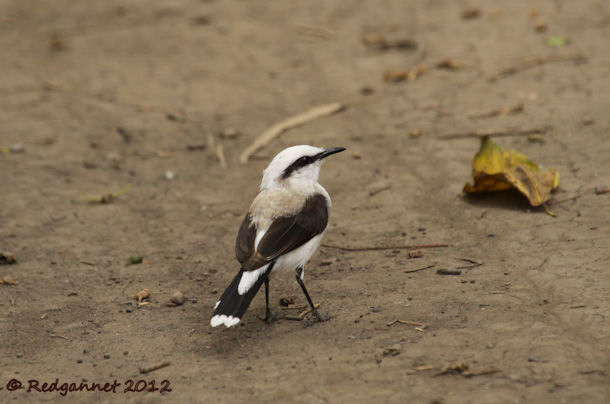 There is an intersection here. I was travelling clockwise, so I kept to the right to stay on the main circular route. Most people conforming to the correct anti-clockwise direction would bear to the left. This took me southeast, away from the river. The trees were taller, in broader swathes and the birds became more foresty. A flock of Plush-crowned Jays passed through with Ruby-crowned Tanager, and a female Chestnut-vented Conebill. A bench gave me the chance to stop and watch White-spotted Woodpecker, Eared Dove and Chestnut–collared Sparrows feeding by the roadside. 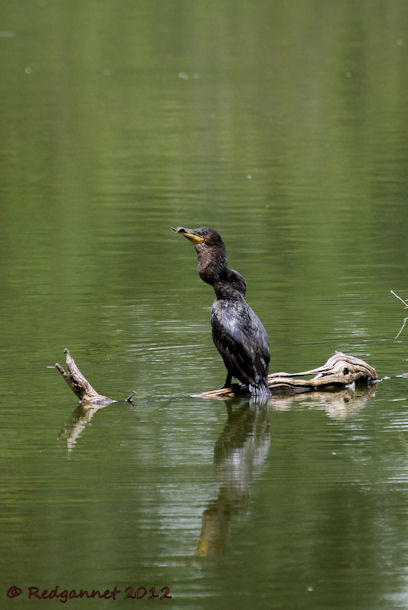 A Neotropic Cormorant had caught a fish that would just not go down. Its neck was distorted by the meal but it didn’t seem at all concerned. 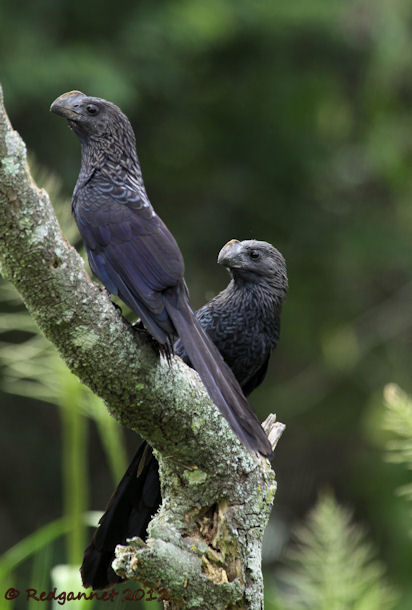 A daring foray down a side path brought a pair of Spix’s Spinetail and a second Furnariid that I was not able to reduce to species level. Smooth-billed Anis posed for the camera on a dead snag and at last gave me reason to be pleased that I had brought it with me. 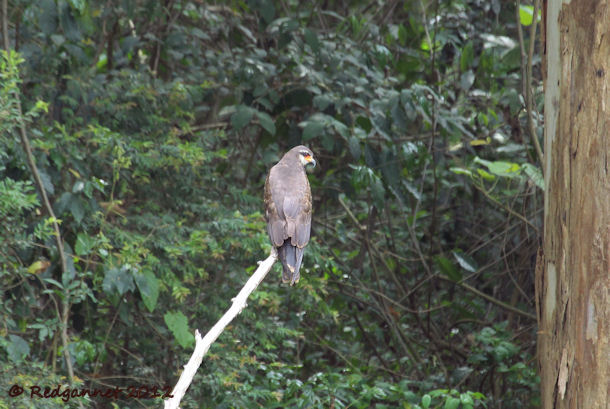 A Snail Kite was perched on a dead tree in a roadside lake. I suspect that this may have been the bird of prey that had flown over earlier. Small pink blobs of snail eggs should have alerted me to the possibility.
I had now come full circle, but had perhaps an hour before I needed to head home, so I had another quick look at the hot-spot picnic area and added a few more species including Red-shouldered Macaw, Yellow-bellied Elaenia and Saffron Finch. 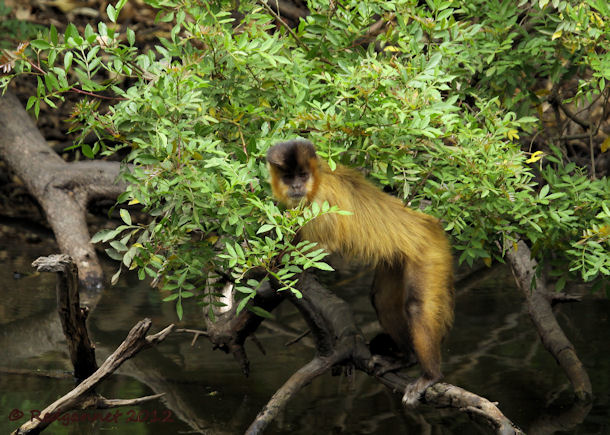 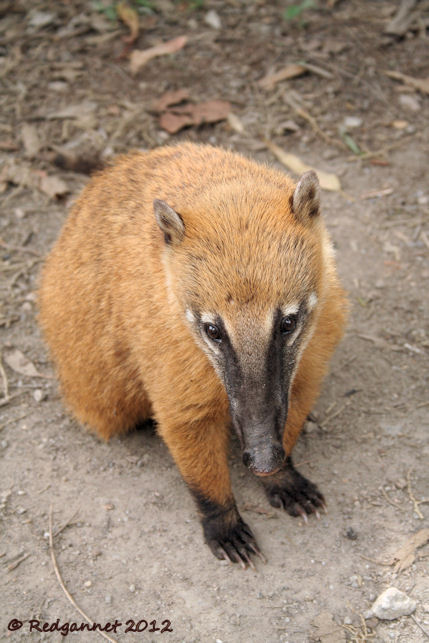 Please be aware of the poverty that exists close to this site. Violent robbery is not uncommon in Sao Paulo and it would be wise to make personal security a prime consideration when visiting Parque Ecologico Do Tiete and at any time on public transport. A taxi would be safer, but there is no taxi rank close to the parque. A pick up for return must be arranged in advance.
It is possible to get back to the city by train from Eng Goulart station nearby. This is for information only in case of emergency only or taxi failing to show.
From the security gate at the parque, pass through the tunnel under the main road and turn right. Turn left after 400m. After 100m pass through the tunnel under the tracks. Turn left and the station, Eng Goulart, is 300m. There is not a taxi rank here. The line runs into the city and terminates at Bras Metro Station. 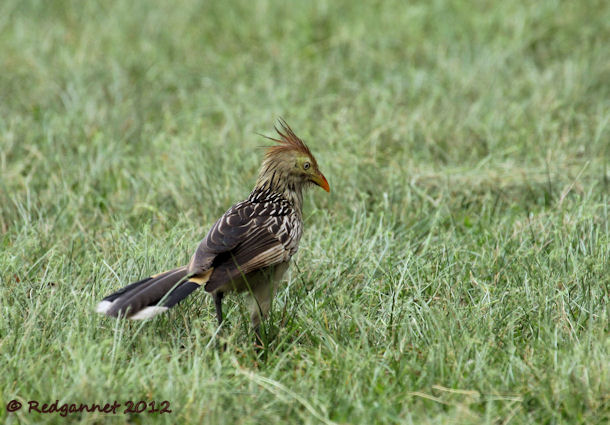 Guira Cuckoo
A previous post from Park Ecologico do Tiete can be found at the link below;
Visit the dedicatedCentral and South America Page for more from Sao Paulo including IbirapueraPark and Sao Paulo Botanical Gardens.
Posted by Redgannet at 23:48