The clouds looked fit to burst. Like an excited child wriggling on the edge of its seat, it was clear that soon it would be wet. Chancing my day to the meteorological equivalent of a weak bladder may have been risky, but what else would I do on an early Friday morning in Seattle? 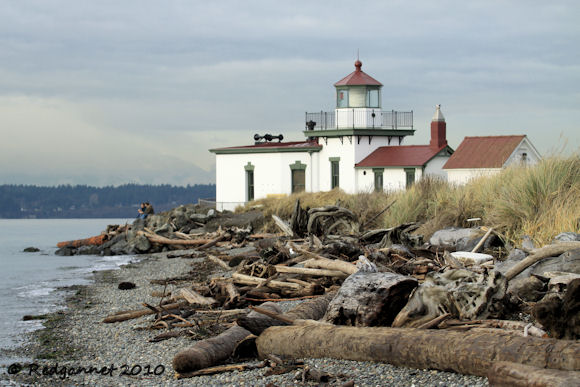 I caught the bus out to Discovery Park to the north-west of the city and was dropped at the north car park, just beyond the military base at 08.30. Plenty of Ruby-crowned Kinglets and a single Song Sparrow were feeding in and around the vegetation here. 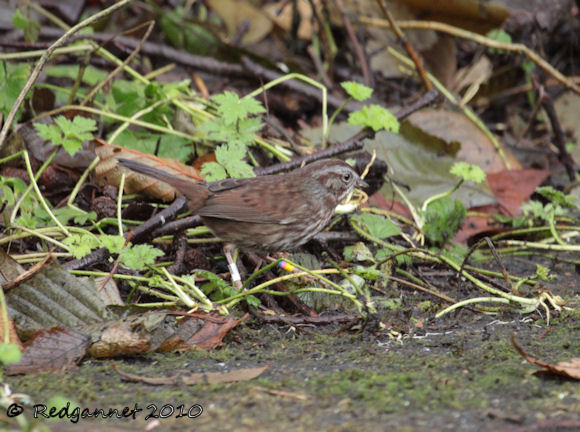 The sparrow had rings which may be of interest to someone. 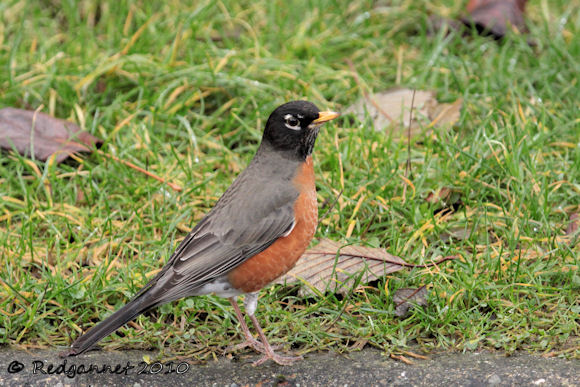 A pair of Bald Eagles flew over calling plaintively. On the grass, a flock of American Robins were feeding, but closer inspection revealed a couple of slightly smaller Varied Thrushes.
2 years ago I met up with Charlie from 10000 Birds in Vancouver where we went looking for Varied Thrush. 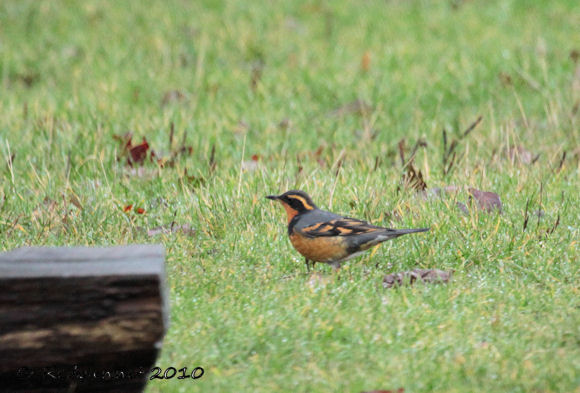 I wanted to submit a picture of Charlie with a chickadee to his website, but didn’t have a blog from which to link, so I committed Redgannet. If you are looking for someone to blame, then he’s your man.
In homage, this one is for Charlie. 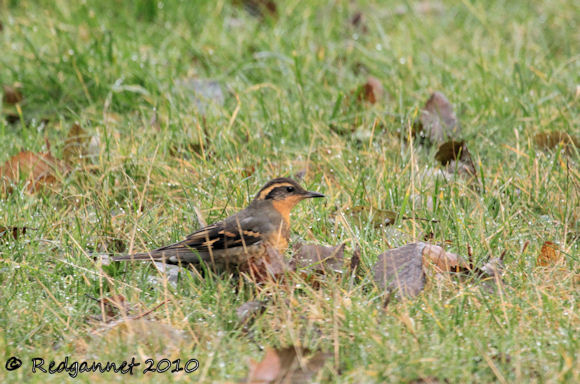 Red shafted Flickers were also feeding in the very wet grass and close by. I remember coming here once before and it was so wet then that I wondered if it would ever dry out. Sure enough, 4 years later, it is still sodden. But moss does well here. 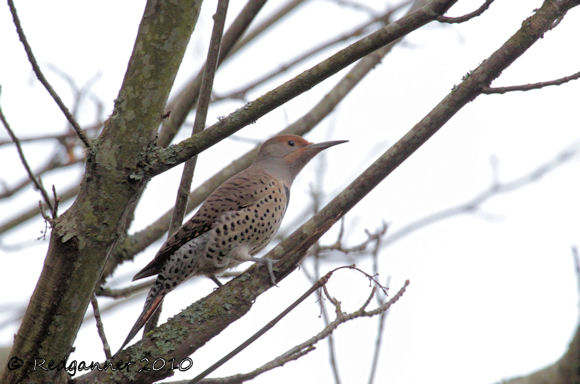 On the cliff edge beyond the Indian centre is a platform that commands a wonderful view of Shilshole Bay close in and Puget Sound beyond. Foolishly hoping to see Orcas, I had a good scan around, but had to make do with a Harbour Seal to open my mammals list for the day. The birds were better represented with Red-breasted Mergansers being the most abundant, closely followed by Common Goldeneye. Western and Horned Grebes were common too with a few Surf Scoters and Double-crested Cormorants further out. 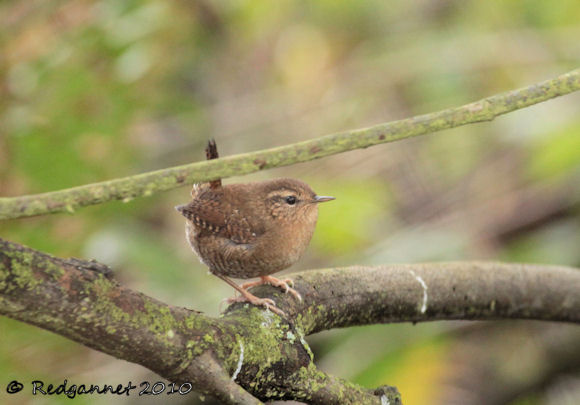 The eagles called again as they flew out over the bay. They gained height then slammed into one another, locked talons and spiralled down towards the water, breaking out of the hold at the last moment before flying off around the headland. I am assuming this to be a pair-bonding routine by the resident pair, though a territorial bird may engage a rival in this way too. The pair was perched atop a tree as I made my way towards the steps leading down to the shore. As a note, if you go down, you will have to climb back up again, one way or another. A Bewick's Wren responded to some more pishing in the damp woods by the last flight of steps. 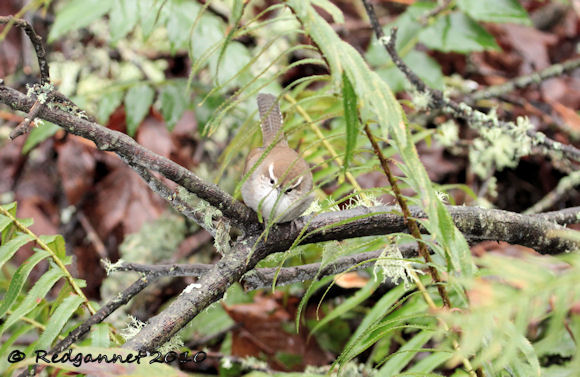 The clouds were hanging on and even seemed to be thinning a little as I came out onto a tiny beach at the bottom of the steps. North Beach Trail runs along the water’s edge towards the charming lighthouse at the western most point of the park. 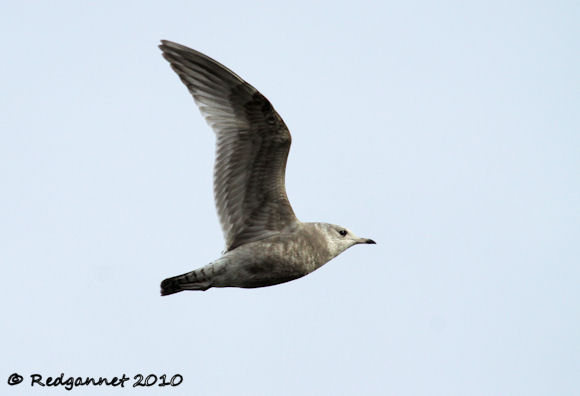 Gulls were over-flying, including this first winter Short-billed Gull, the American form of the Mew Gull.. Horned Grebe were plentiful and quite close to the rocky reinforced shoreline. Low bushes give a bit of cover and allowed me to hide from a Common Goldeneye until she got close enough for a photo. A small fresh water pond held some Mallard, American Wigeon, Gadwall and Northern Shoveler. 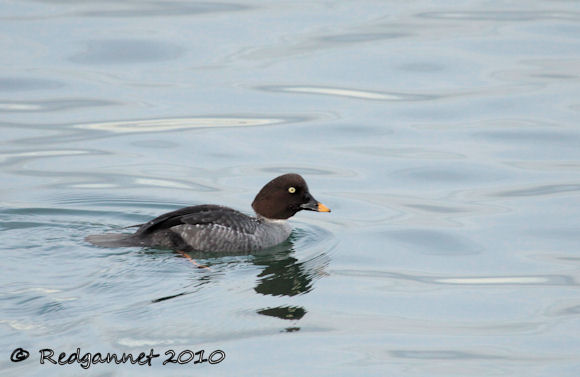 The beach is littered with huge timbers that would be a hazard to shipping if they hadn’t been washed up. As I sat on one for a while to take in the view, I was thrilled to notice three River Otters swim by. One had a flatfish and was swimming ahead of the other two. The lead otter kept checking behind to ensure that the others were following. 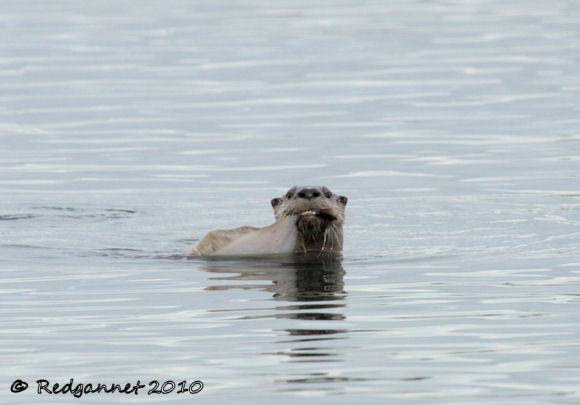 I am not too familiar with otter family dynamics, but I am guessing that it was a female with two youngsters. The younger ones had a moment of mischief when they chased a flock of scaup and put them to flight. Greater Scaup are the more expected bird here usually, but the white in the secondaries, not extending into the primaries, makes me think Lesser Scaup.

Two other birds on the flat calm waters of the bay were Pigeon Guillemot and Rhinoceros Auklet.
The clouds had thinned out now and the threat of rain had passed. It was reasonably mild and a Song Sparrow was limbering up for Spring. 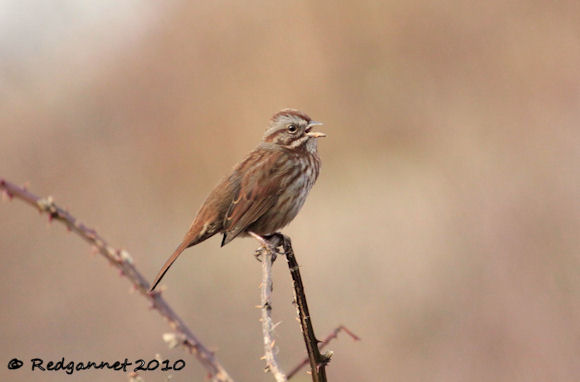 Having come down the steps to the shore, I was condemned to climbing back up. The South Beach Trail ascends the bluff to the meadow. A platform halfway up gave a beautiful view of the lighthouse. The sun even peeked out for a moment. The meadow area was quiet today, but apparently it comes into its own during the summer and Barn Owls are said to patrol the rough grass here. A bird party was feeding in the conifers near the Emerson St entrance (Bus 24 stops here). Black-capped and Chestnut-backed Chickadees were joined by Gold-crowned Kinglets which seemed to have replaced the rubies in this habitat.
By now, I was back on the Loop Trail which, as the name suggests, runs in a loop on the high ground of the park, avoiding the steps (but also the otters). Eventually this led me to the Visitor Center at the east gate. Maps are available from dispensers at each car park and the centre. A couple of useful links with maps and bird list are given below;
http://en.wikipedia.org/wiki/Discovery_Park_(Seattle)
http://www.cityofseattle.net/parks/Environment/DiscoveryParkBirds.pdf

Other posts from Seattle can be found on the USA specific page as below;
http://redgannet.blogspot.com/p/posts-from-usa-and-canada.html 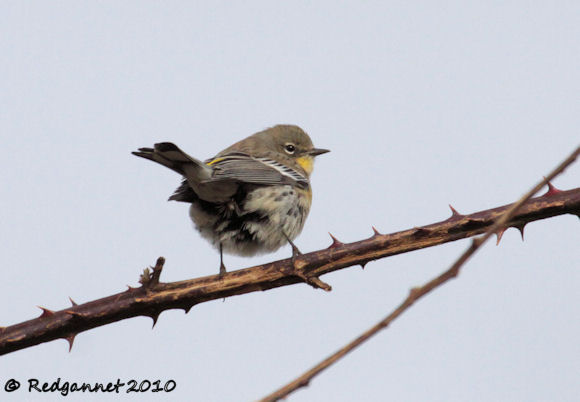 Yellow-rumped Warbler
The bus no 33 to Discovery Park leaves from 3rd St and Union, it stops at the North Parking Lot (Google Earth ref;  47°39'52.54"N 122°24'39.46"W) close to the Daybreak Indian Cultural Centre. No 24 also leaves from the same stop, but turns off just before the park entrance. At weekends, they run once an hour. During the week the service is more frequent, but less regular. You can pick up a timetable on the bus or look up route 33 at www.kingcounty.gov/tripplanner