Ibirapura Park in Sao Paulo offered the chance to acclimatise my eye and ear (one good one of each) to the common birds of Brazil. It was very busy on a Friday afternoon between Christmas and New Year with lots of families, cyclists, walkers, runners, picnickers and skateboarders. Judging by the number of canoodlers, there will be even more families next year. All were well policed and the park had a friendly, safe feel to it. 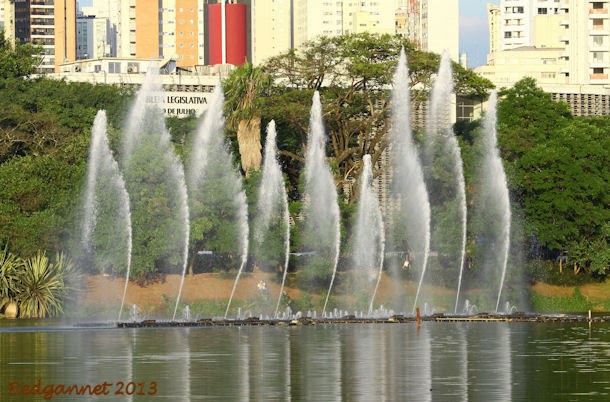 There are two lakes. I was dropped by the taxi near the first where the fountains were giving their interpretation of the water dance. The second lake is severely pinched at the middle where a bridge crosses (Google Earth ref; 23 35 13.52S 46 39 34.70W). The rest of the park is given over to lawns with scattered trees and woodland and a complex of cultural buildings. There is not much in the way of low vegetation, but this adds to the reassuring air in a city where violent crime is a major consideration. 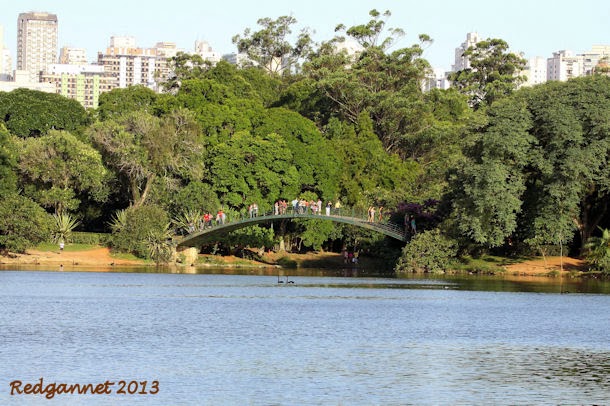 The Rufous-bellied Thrush is usually the most easily seen bird of the park and was first on the list for this evening’s quick visit. Bananaquit, Chalk-browed Mockingbird and Social Flycatcher joined it as I made my way through the museums and art foundation buildings towards the bridge. 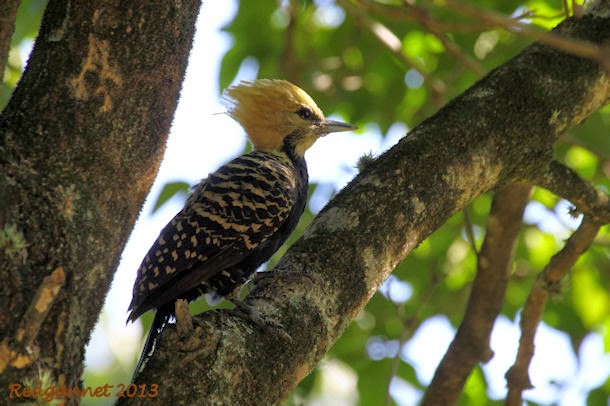 I usually follow a distorted figure-of-eight around the second lake. Starting from the bridge, the walk around the lower lobe is often quite productive, bringing the more interesting birds. A surprise came today in the shape of a Blonde-crested Woodpecker which stooped beside me for a clear, but all too brief look. House Wrens, Amazon Kingfisher and Sayaca Tanager were also seen along this section. 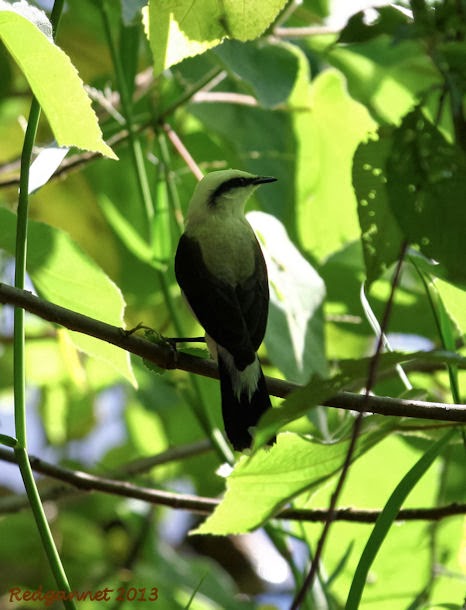 I don’t recall seeing Masked Water Tyrant in the park before, but it likes water margins, so I shouldn’t have been surprised. Anywhere in the park near water, the Greater Kiskadee is likely to be seen or heard. The other constant is the ever-present Black Vultures circling overhead. As I re-crossed the bridge and took a few moments in the shade, a vulture swooped down to some stinking bags which had been left by the groundsmen and found a dead rat. 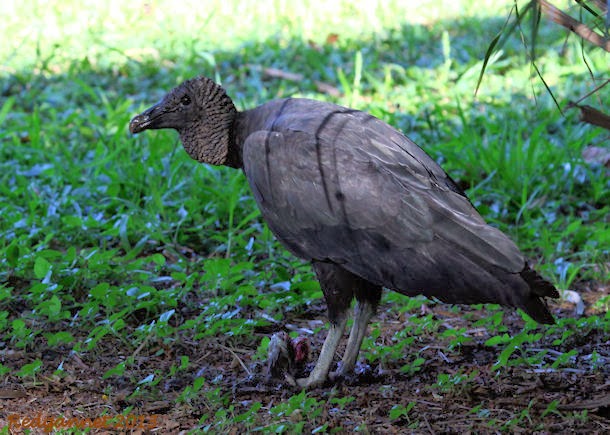 The banks of the upper lobe to the west of the bridge can be productive too with Cattle Tyrants, Rufous-browed Peppershrike and Creamy-bellied Thrush seen today. An American Great Egret posed on a bank-side snag. 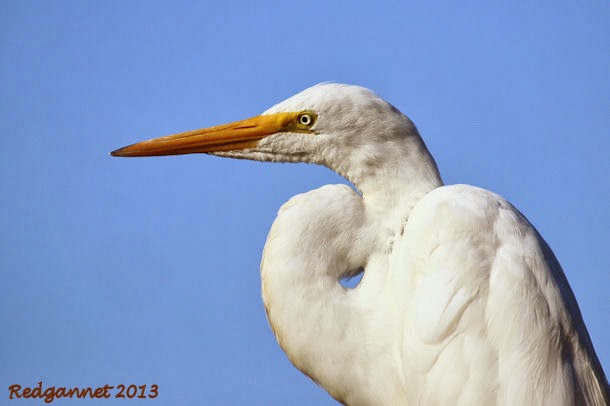 On the far side of the lake is a spot favoured by the exotic wildfowl collection. A Black-crowned Night Heron had joined them. Suddenly the heron shot out its neck and grabbed a young Common Moorhen. It flew off to gobble down the chick, leaving the parent birds running frantically up and down the bank. 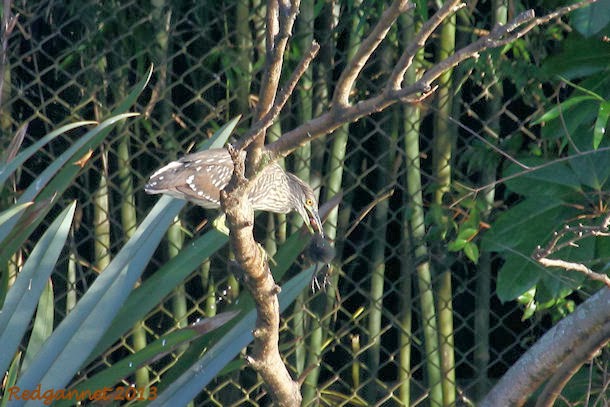 In the circumstances, the Southern Lapwings gave their offspring a long leash, allowing it to wander as it would. The chick seemed oblivious to threats, but the adults raised a raucous noise whenever it roamed too far from them, or too close to danger. 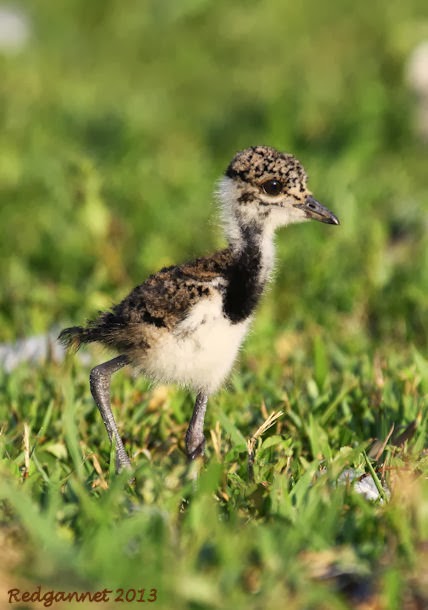 I had expected to see more flowering trees in bloom at this time of year, but in fact there were very few. This might explain why there were so few Plain Parakeets and Bananaquits and no hummingbirds. 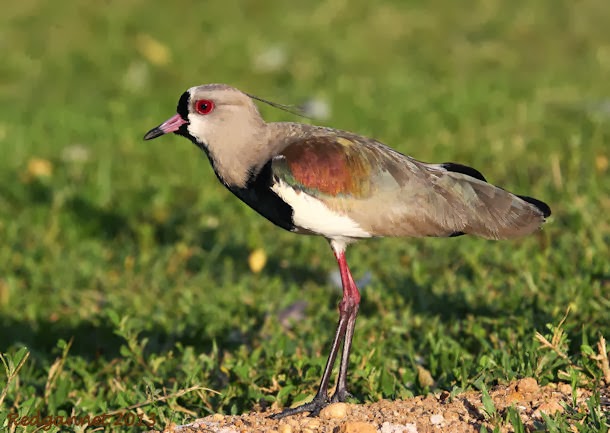 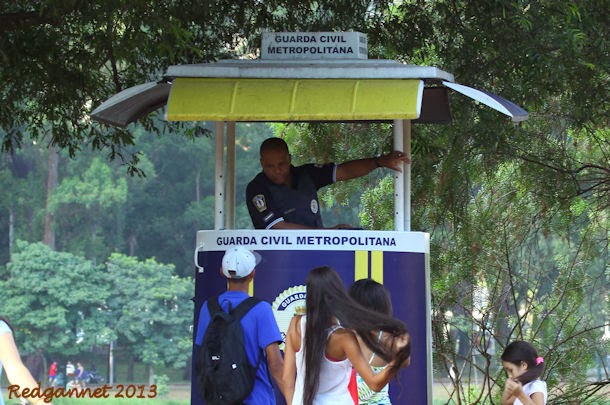 Ibirapuera Park is visibly policed with static as well as mobile patrols throughout the site. It is not well served by the metro system, the nearest station being Paraiso. From Paraiso Metro Station, it is 1.6kms southwest on Rua Estella. A taxi from Avenue Paulista costs around R15 (@R3.5 = £1).
Oh, and Happy New Year!