The evening was already drawing in as we arrived into Houston, Tx. We were staying at a new hotel, so I had to find my bearings before heading out. The concierge suggested a riverside trail called Terry Hershey Park, Hike and Bike Trail. It runs  along Buffalo Bayou, heading upstream from Texas Hwy 8 at Briar Hill Drive (Google Earth ref; 29°45'45.99"N 95°33'26.42"W).
I rode for about 2 miles upstream along the paved trail, reaching an open meadow just as the light faded. I stopped and watched, hoping that an owl might show and trying to get a hand-held picture of Jupiter and its four Galilean moons. 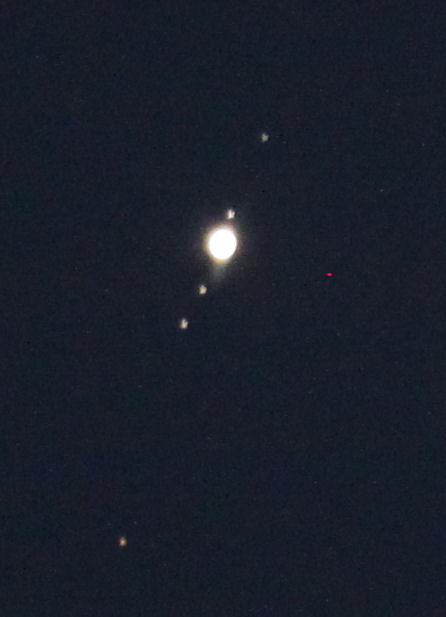 From the top, they are Callisto, Ganymede, Io and Europa. At bottom left, the red star is Aldebaran and the red dot to the right of Jupiter is a patch of hot pixels on my sensor.


On the ride home I scanned the trees with my head torch, still hoping to pick up some eyeshine from an owl. I was fooled on a couple of occasions by Aldebaran, the red eye of the bull, Taurus. The star was shining out so brightly that it showed clearly through the branches of the trees.

Just after passing under a road bridge, I came up onto a meadow and heard a soft hooting. I stopped and cast the torch around, but couldn’t see anything. The hooting continued and I tracked it to the top of a pylon as a large dark shape came into land. Another dark shape was already perched on the pylon and 4 eyes reflected my torch back at me in red. They stopped momentarily before flying on and out of sight.


Terry Hershey Park, Hike and cycle trail has many access points along its length. It begins 1.7 miles from Westheimer, north along the access road from the Texas Hwy 8. Approximately 5 miles upstream, a footbridge crosses the bayou at N Eldridge Parkway. Cross here and continue along the other bank to access the cycle trail at George Bush Park.